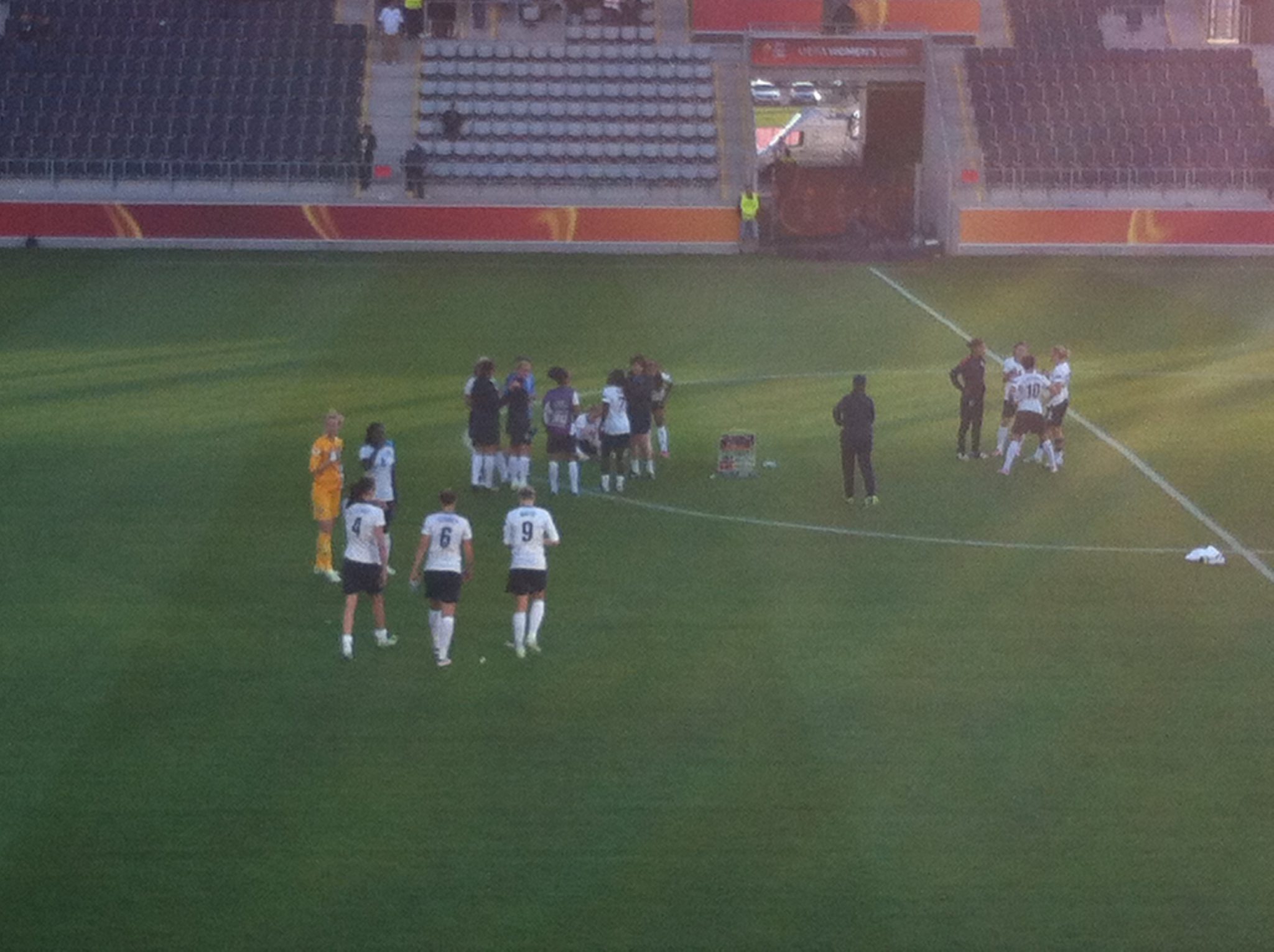 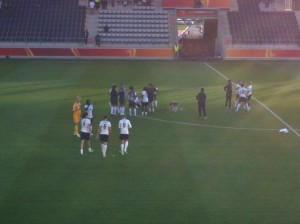 England take a breath following a last-minute goal to salvage a 1-1 draw with Russia and keep their Euro 2013 hopes alive. (Photo Copyright Harjeet Johal for The Equalizer)

LINKOPING, Sweden — After loosing their opening matches at the European Championships, England and Russia both faced a must-win situation going into a crucial second Group C contest. On the verge of near-elimination, England rescued a late equalizing goal thanks to Toni Duggan in extra time. England controlled most of the first half and the majority of the match, however a Nelli Korovkina goal in the 38th minute put Russia ahead until Duggan scored in the 93rd minute in front of mostly 3,629 England supporters at Linkoping Arena.

The No. 7 ranked team in women’s football greatly under-performed against the lowest ranked (22) team at the European Championships and both teams missed an opportunity to earn a very important three points. With a date looming with France (for England) and Spain (for Russia) on Thursday, both squad’s face uncertainty and many questions from for lackluster outings in both of their Group C matches at Euro 2013.

England striker Ellen White was glad to see the team rescue a point, but knows that they have to be better.

England came out with a lot more jump against Russia, and created plenty of scoring chances in the first 10 minutes alone. Ellen White had her shot go over the top left corner and Jill Scott also had her opportunity go over the top corner after Elvira Todua got a touch to deflect the ball off her post. England generated three early corners, and played with more pace and ball possession. Alex Scott got forward on multiple occasions, and added another threat to score as she captained her side and earned her 100th cap for England.

Russian Coach Sergei Lavrentyev squad reacted instead of taking the game to England. Coming off a 3-1 loss to France, the Russians could not afford another defeat, and they simply did not look dangerous early in the first half outside a pair of chances in the opening minutes. Despite being second best early on, Russia opened the scoring in the 38th minute through Korovkina. Elena Morozova crossed in a beautiful ball in front of the England goal, and Elena Terekhova mis-hit her shot and it went right to Korovkina, who was in the right place at the right time and she scored with her head. England got caught ball watching, and Russia made the most of what they made for themselves.

On 17 minutes England were forced to make a substitution as midfielder Rachel Yankey pulled up short. The senior most capped player in England football was replaced by Karen Carney. Hope Powell offered an update following the match.

“Her hamstring she clutched it,” Powell said of Yankey’s injury. “Basically she’s going to have a scan and we’ll see where she is at. She felt like she couldn’t push-off so were going to have a look at it.”

With England facing sure expulsion from the tournament Powell’s side pressed on for that ever-elusive goal in the second half. Russia gained momentum after Korovkina’s goal and that got them going, as they were slow to start the opening 45 minutes. White, England’s lone striker, had what looked to be a great chance to score in the 60th minute when Karen Carney found her at the back post. White had the ball deflect off her leg, and wide to the left of the Russian goal. Moments later Fara Williams tried to catch Todua napping with a sharp angle attempt but the Russian keeper made the save.

Hope Powell took off left back Steph Houghton, and brought on 21-year-old Everton Ladies forward Toni Duggan in the 64th minute. England’s manager then called on all-time leading scorer Kelly Smith in the 78th minute of play to rescue England as they faced an almost certain exit from Euro 2013. Smith had been battling a shin injury, and many pundits in the United Kingdom wondered why she was named to the squad.

Duggan hit the crossbar on 90 minutes, and it looked like that was England’s best chance to equal the match. However, the Lionesses had one more kick at the ball, and in the 93rd minute Duggan buried her shot to save the day for England just as all hope looked to have been lost. Smith showed that she still has a bit of game left in her as she delivered the cross that found Duggan.

England still need a result against group leader France (2-0-0, 6 pts., after beating Spain 1-0 in the evening game) to have a chance of advancing.

“We will analyze this game and see what we need to work on and will look forward to the France game. It’s a massive game for to keep us in the competition, and we’ll be fighting. For us it is a bit of a revenge game against France; they knocked us out of the World Cup. We haven’t beaten them for a few years, and collectively we will be fighting all the way.”

England haven’t defeated France since 1975. Russia will see this as a last-second loss when they looked to have secured three points. The European Championships have been full of surprises in Sweden, and England have never made anything easy on themselves.

The French have qualified for the knockout phase after defeating Spain 1-0 on a 5th minute goal from defender Wendie Renard. The tall defender glided through the box unmarked to head in a Louisa Necib corner kick.