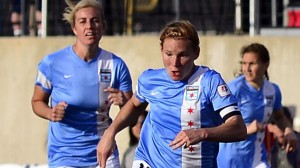 Vlatko Andonovski had to remind himself that his team hadn’t lost the game.

The FC Kansas City coach had just watched his team blow a two-goal lead after the 85th minute for the second time this season, this time tying the Chicago Red Stars 3-3.

“When you go on an away trip and you score three goals, you’ve got to win the game,” Andonovski said.

Kansas City looked like it had secured the three points when Erika Tymrak scored in the 86th minute to give the visitors a 3-1 lead. As Tymrak tapped in the 3-v-1 breakaway to extend the lead, Taryn Hemmings went down with a left knee injury and the Red Stars had to finish the game with 10 players, down two goals, having used all three substitutions already.

Surely a loss was in the books, right? Chicago still felt there was a chance.

“Yes, but not a good one,” Red Stars coach Rory Dames said as to whether he thought his team could rescue a point after that. “We thought we had a chance.”

Then Ella Masar scored in the 90th minute to give the home team hope. And a few minutes later, she settled a Jackie Santacaterina cross for Lori Chalupny, who knuckled it into the back of the net for the dramatic equalizer.

For Kansas City, the blown chance to jump into sole possession of second place felt all too familiar. Kansas City led Sky Blue FC 2-0 on the road on June 26 in the 85th minute, before Monica Ocampo scored twice for Sky Blue FC to secure a 2-2 draw. FC Kansas City left two points on the board again on Sunday, something they plan to address going forward.

“One thing we definitely need to change and work on is the psychological aspect,” Andonovski said. “Finishing, being focused and concentrated all the way through so you don’t have any let downs late in the game.”

FC Kansas City dominated the opening 45 minutes but went to halftime up only 2-1.

Tymrak found her way in behind the Red Stars’ defense in the 17th minute when Chicago goalkeeper Erin McLeod came out to challenge her. McLeod got a piece of the ball near the top of the 18-yard box, but Lauren Holiday (nee Cheney) was there for the tap-in and the early Kansas City lead.

Mexican international Maribel Dominguez scored a stunning, upper-90 goal from 35 yards in the 41st minute, but it was short-lived after a Hemmings own goal less than two minutes later, following Kristie Mewis’ shot redirecting off the crossbar. Still, Dominguez’s rocket of a shot gave Chicago hope.

“Dominguez brought us back into the game from nothing,” Dames said of Dominguez’s “world-class” goal.

“We definitely stole a point today. We were not the better side by any stretch of the imagination, but we are not usually the better side in the games that we play and we just have to continue to find ways to get points and keep ourselves alive.”

Hemmings will have an MRI on Monday to diagnose her left knee injury.