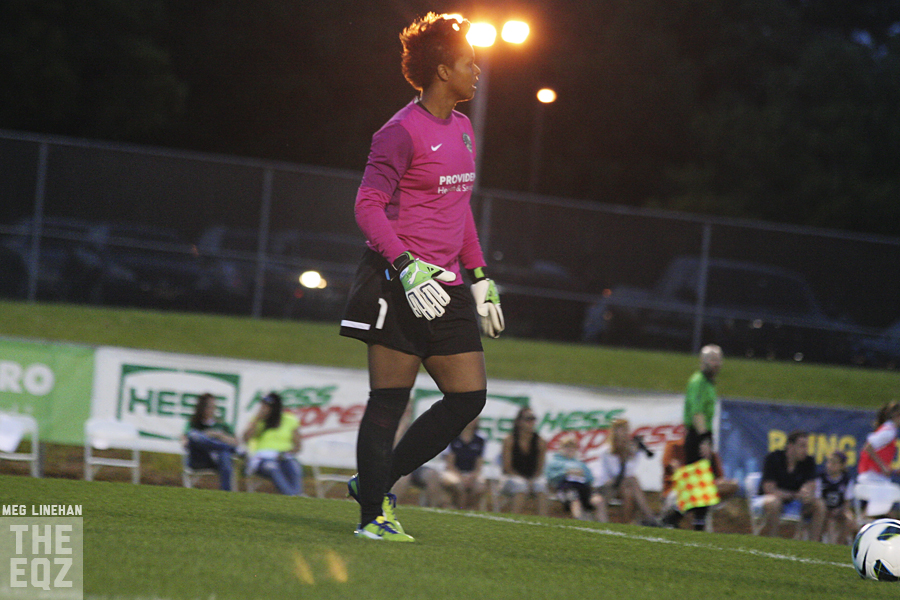 It could have easily been confused for the final, if it weren’t mid-July. And if there were a winner at the end.

Tobin Heath made her first appearance in the NWSL, Abby Wambach still managed to score despite being denied touches for large portions of the game, the goalkeepers stole the show, and the back-and-forth affair between Portland Thorns FC and the Western New York Flash ended in in a 1-1 draw in front of 13,021 at JELD-WEN Stadium.

Most of the first half was a display of skill for Karina LeBlanc, who managed to keep the Flash frustrated for 37 minutes.  Adrianna Franch had a couple moments of her own to shine on the opposite end of the pitch.  The teams would exchange back-to-back opportunities as the 30th minute hit, with Christine Sinclair on the receiving end of a nifty backheel pass from Tobin Heath, who made her NWSL debut on Sunday.  Sinclair sent her shot right into the chest of Franch, and the Flash countered quickly as Sinclair grimaced during her jog back down the field.

The Flash were able to get off three shots in quick succession, but it was the final attempt from McCall Zerboni that proved the most threatening, with both LeBlanc and Thorns defender Kathryn Williamson both getting a piece of it to keep it out of the back of the net. 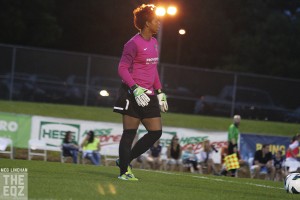 LeBlanc wouldn’t be able to stop Wambach’s 37th minute shot from a Sam Kerr assist, though she was able to just get the slightest touch of her fingertips to it. She wouldn’t have to dwell on it too long, though.

It would only take one minute and four seconds for Portland to equalize on Meleana Shim’s second goal of the season.  Christine Sinclair hustled to maintain possession for Portland in the final third, then beat her defender, and Shim buried her pass into the lower right corner past a diving Franch.

But Franch would get her turn to shine in the second half, with the keeper forced to make two desperate saves on close range shots from red jerseys.  First, in the 74th minute, it would be Allie Long to put one on frame, with Franch pushing it over the crossbar.  Thirty seconds later, she’d have to ensure Alex Morgan’s header stayed wide on a full dive to her right.

Then in the 79th minute, Franch again would stop Portland from nabbing the lead.  She came up with another set of back-to-back saves, first on a Tobin Heath header, and then denying Alex Morgan once again.

The goalkeeper duel would effectively end in the 84th minute, with LeBlanc taking the final edge.  After Allie Long made a late tackle on Sarah Huffman, referee Ted Unkel awarded a penalty kick to the Flash.  And who else would step to the spot but Abby Wambach?  LeBlanc read her intent, after taking a couple of tentative steps to her right, put both hands on Wambach’s attempt and pushed it off the post to deny the go-ahead.

“You know, Abby took a PK last game and I’ve gone up against Abby a couple times over the years and I just try to read her and I was thinking at first she was going to go one way, but then she kind of opened up so, I guess I got lucky,” LeBlanc said.

Neither team would get much of a dangerous chance in the remaining time, though at one point Sinclair tangled herself up with Franch in the box, and she would eventually be called for the foul.