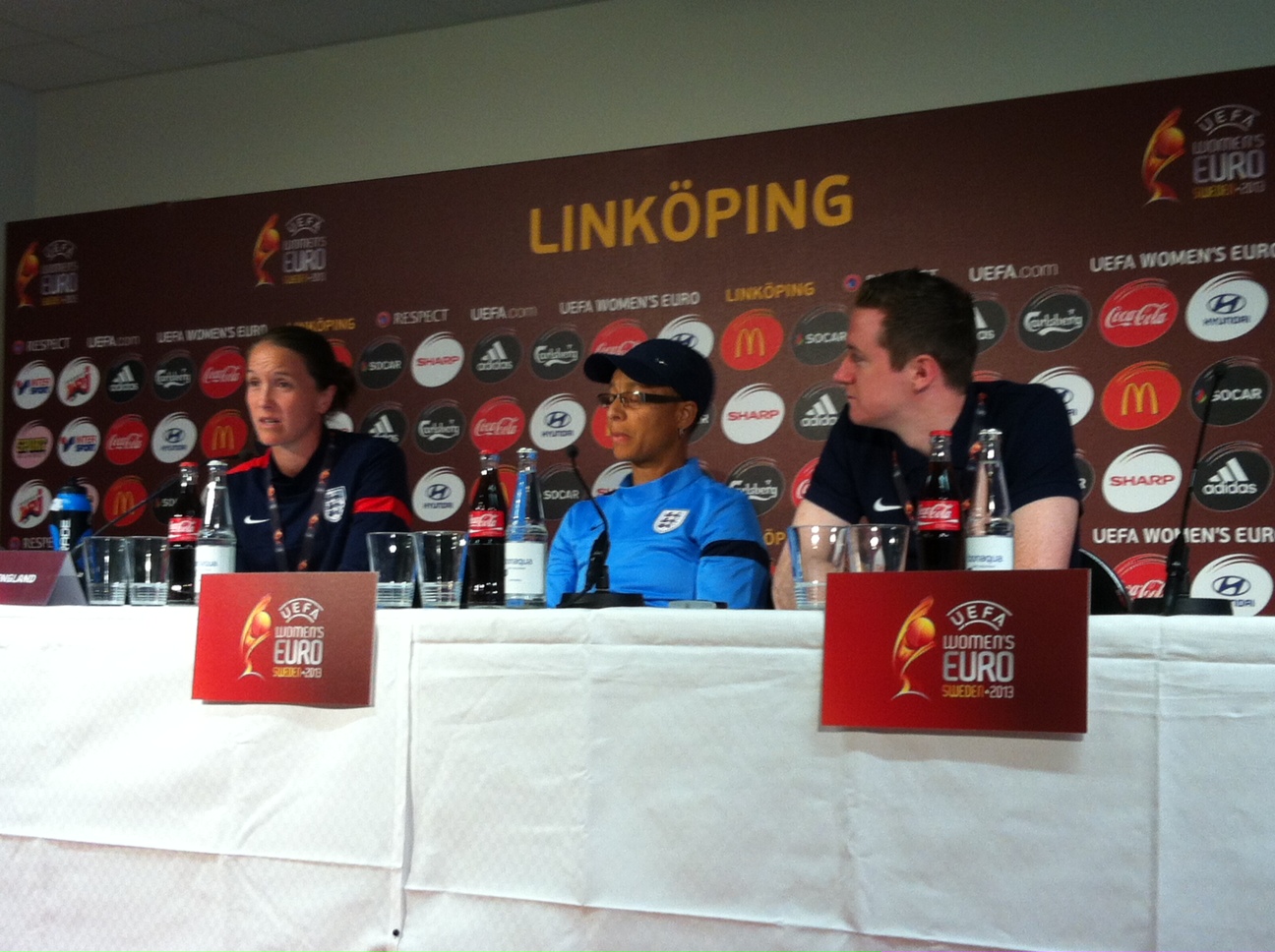 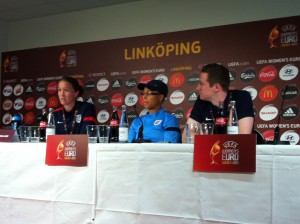 England and coach Hope Powell (center) are ready for Spain in their Euro 2013 opener. (Photo copyright Harjeet Johal for The Equalizer)

LINKOPING, Sweden – With less than 24 hours before they take to the pitch against Spain, England had their first official press conference with the assembled media at Linkoping Arena on Thursday night. Captain Casey Stoney, and coach Hope Powell spoke for five minutes as they gave a bit of insight into their mindset before they open Euro 2013 against the Spaniards on Friday night.

Powell was not tipping her hand, and did not offer up any starting lineup information. She did however rule out Sophie Bradley, who has not yet recovered from an ankle injury sustained on July 4 against Sweden. The Lincoln Ladies defender was seen on crutches at the team hotel earlier in the week.

England has no other injury question marks, Powell said.

“Everybody is doing okay, obviously I think it’s well documented about Sophie… but everybody else is fit, health, and up for selection.”

Kelly Smith sat out practice on Thursday evening with a shin injury, and it is still unknown how much playing time she will receive. The most prolific scorer in the history of England women’s football was questionable to make the squad, and if she does get into a match it will be late as a substitute if the Lionesses trail.

Strikers Eniola Aluko and Ellen White should draw into the starting eleven as they try to penetrate a stingy Spanish defense that should consist of Melisa Nicolau, Ruth Garcia, and 23-year-old standout Marta Torrejon. To nobody’s surprise Spain plays a possession-oriented game that allows them to dictate and take control of a match. England will have to be extremely patient as they wait for their opportunity to counter attack. Scoring has been tough to come by in the opening four matches of the European Championships as no team has scored more than once.

Should the England defense crumble against Spain you can look to the likes of Veronica Boquete to get the Spain offense clicking. The former WPS Philadelphia Independence player led Spain with 11 goals in qualifying for Euro 2013. Adriana is another player to watch for Spain as she’s always a great threat to score when given an opportunity on goal. Adriana left the Western New York Flash fourth on the team in goals with two before joining up with Spain.

Spain has a fantastic superstar in the making in 19-year-old teenage phenom Alexia Putellas. Ever since she scored a beautiful goal against Prainsa Zaragoza in the Final Copa de la Reina on June 16 (also embedded below), the Barcelona Ladies striker has been compared to Alex Morgan.

Casey Stoney talked about the tough times England have had in recent matches against Spain.

“We know it’s going to be a difficult task, obviously playing them quite a lot recently, and we’ve struggled to beat them at times so we know it’s going to be difficult, Stoney said. “We’ve done all the research we need to do, the managers don’t leave any stone unturned where that’s in play. We’re excited, we’ve been waiting a long time for this, so we’re going to go out and give it our best shot.”

Notes: All four games at Euro 2013 have all ended in a draw abd 1.5 million television viewers in Sweden watched the host country draw 1-1 with Denmark on Wednesday night.