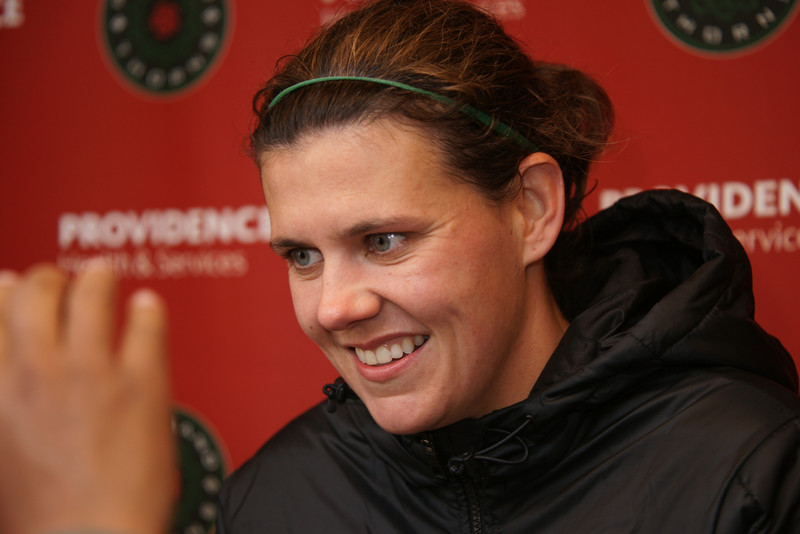 The Thorns have not scored in two-straight. Christine Sinclair (above) has not scored since May 25. (Photo Copyright Thad Bell for www.womens.soccerly.com | http://www.tpbphoto.com/)

Three more matches this weekend.  Sky Blue and the Thorns will try to solidify their hold of the top two spots while the Breakers will look to close ground on whoever fails to pick up three points in Sunday’s Flash-Blues affair.  Here is a closer look at the remaining Week 13 action in NWSL:

Quick Look:  The Spirit will play game two under new coach Mark Parsons and they will do it on the road against the first place side.  In Wednesday’s debut they managed to snap a five-game losing skid and a 543-minute goalless drought in a 1-1 draw against FC Kansas City.  They were also buoyed by the return of Diana Matheson, while Sky Blue will be without Lisa De Vanna (Australian national team), Caitlin Foord (with Australia and injured), and Sophie Schmidt (red card) and possibly Kelley O’Hara (sprained ankle).

[MORE: Second half of season offers new beginning for Spirit]

Tactical Short:  Sky Blue used Danesha Adams at right back in Boston last Sunday and the team conceded three goals.  Meanwhile the Spirit do their best attacking up the right side—Sky Blue’s left—through Matheson with Ali Krieger in behind at right back.  One thing the Spirit do not do very well is switch the point of attack through their backs, so Sky Blue have time to rotate their defensive shape.

Quick Look:  The Breakers will be trying to leave the Pacific Northwest with a pair of results following Wednesday’s 1-1 draw in Seattle.  This time they get the Thorns, a club with a strong record but still struggling to find a link to their goal scorers Alex Morgan and Christine Sinclair.  To that end, the Thorns have been blanked in two-straight matches for the first time.

Tactical Short:  The Breakers have a clear edge in midfield and they will need to exploit it to the hilt else risk letting Morgan and Sinclair get matched up with their outside backs.  Likewise the Thorns should be looking to push whoever starts at the outside midfield spots to take advantage of the Breakers’ most glaring weakness.

Quick Look:  The two teams occupying the bottom playoff positions will be looking to make inroads towards getting into the top two and an opportunity to host a semifinal match.  The Flash just had their nine-game unbeaten streak end, leaving the Blues with the longest current run in the league at four (same as Seattle Reign FC.)  FC Kansas City will again be without Lauren Cheney, who is getting married this week.

Tactical Short:  FC Kansas City have recently had issues with lofted balls in the box and that’s where Flash forward Abby Wambach does some of her best work.  Wambach netted both goals in their first meeting, a 2-1 victory for the Flash.