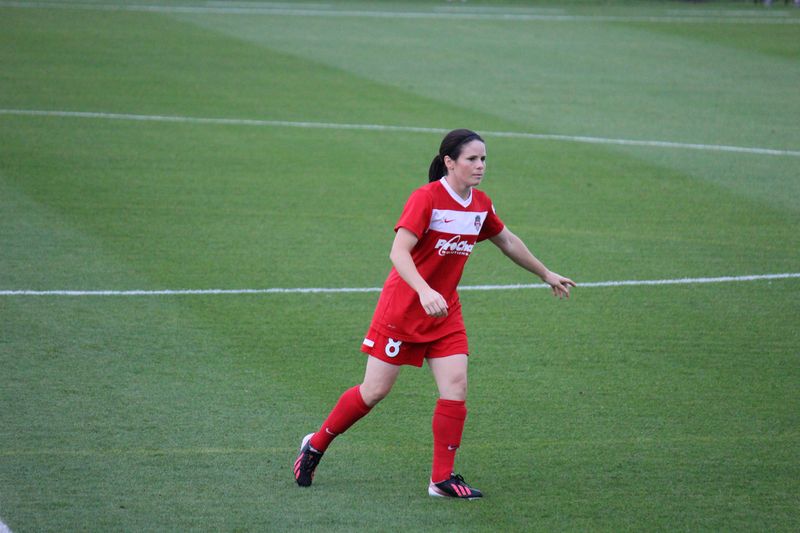 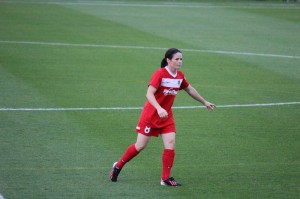 BOYDS, Md. — With a new coach on the bench, the Washington Spirit snapped a 543-minute scoreless streak and a five-game losing streak on Wednesday at the Maryland SoccerPlex, tying FC Kansas City 1-1.

Diana Matheson’s 87th minute penalty kick ended the drought for Washington. Matheson, who hadn’t played for the Spirit since May 25, roofed the PK past Nicole Barnhart after Tiffany McCarty was brought down in the box.

The visiting Blues drew first blood.  After a fairly even first half, Erika Tymrak scored off a cross from Merritt Mathias in the 55th minute to give Kansas City to 1-0 advantage.

It looked like the Washington Spirit’s scoreless streak would extend to six full matches until Tiffany McCarty was fouled inside the box in the 87th minute. Diana Matheson chipped Nicole Barnhart to level the game and end the Spirit’s drought.

Washington announced on Monday that Mike Jorden was officially fired as coach after a 1-7-3 start. Spirit Reserves coach Mark Parsons took over for his first game in charge on Wednesday. Parsons made some interesting personnel decisions late while searching for the equalizer.

In the 81st minute, Parsons subbed forward Conny Pohlers off in favor of defender Kika Toulouse. Instead of shifting to the backline, Toulouse lined up as a forward. Ali Krieger also moved from her usual right back position to the midfield. Subsequently she moved back to the defense after Matheson’s score.

Aside from the goal scoring plays, both teams generated a few dangerous opportunities.  Pohlers nearly notched a goal in the 48th minute after Matheson back-heeled the ball to Pohlers, whose hard shot was saved Barnhart.

Mathias meanwhile was her team’s offensive catalyst in absence of Lauren Cheney, who is getting married. Mathias not only recorded the assist on the Blues only goal of the night but she also put the Spirit backline under the pressure throughout the match.

“Mathias stepped in and did what we asked her to do and created for us,” he said. “She created early on in game and kept creating all the way until the last second.”

For the Blues, Wednesday’s draw marked the second time in three matches that the team conceded a late equalizer. One week prior, Kansas City blew a two-goal lead in the final minutes to Sky Blue FC.

Andonovski expressed frustration regarding penalties called against the Blues.

“Anytime you’re up and the game gets tied up at the end it’s a little bit disappointing but again we can play against a team but not against the referees,” he said.

Kansas City will once again be without Cheney, recently named NWSL Player of the Month. Currently, Cheney is tied for the league lead in goal scored with Boston’s Sydney Leroux. Each player has eight goals after Leroux scored in Boston’s 1-1 tie with Seattle Reign FC on Wednesday.

Parsons and Washington will face a tough challenge in their efforts to start anew on Saturday as they face off against Sky Blue FC, who currently sit atop the league standings.