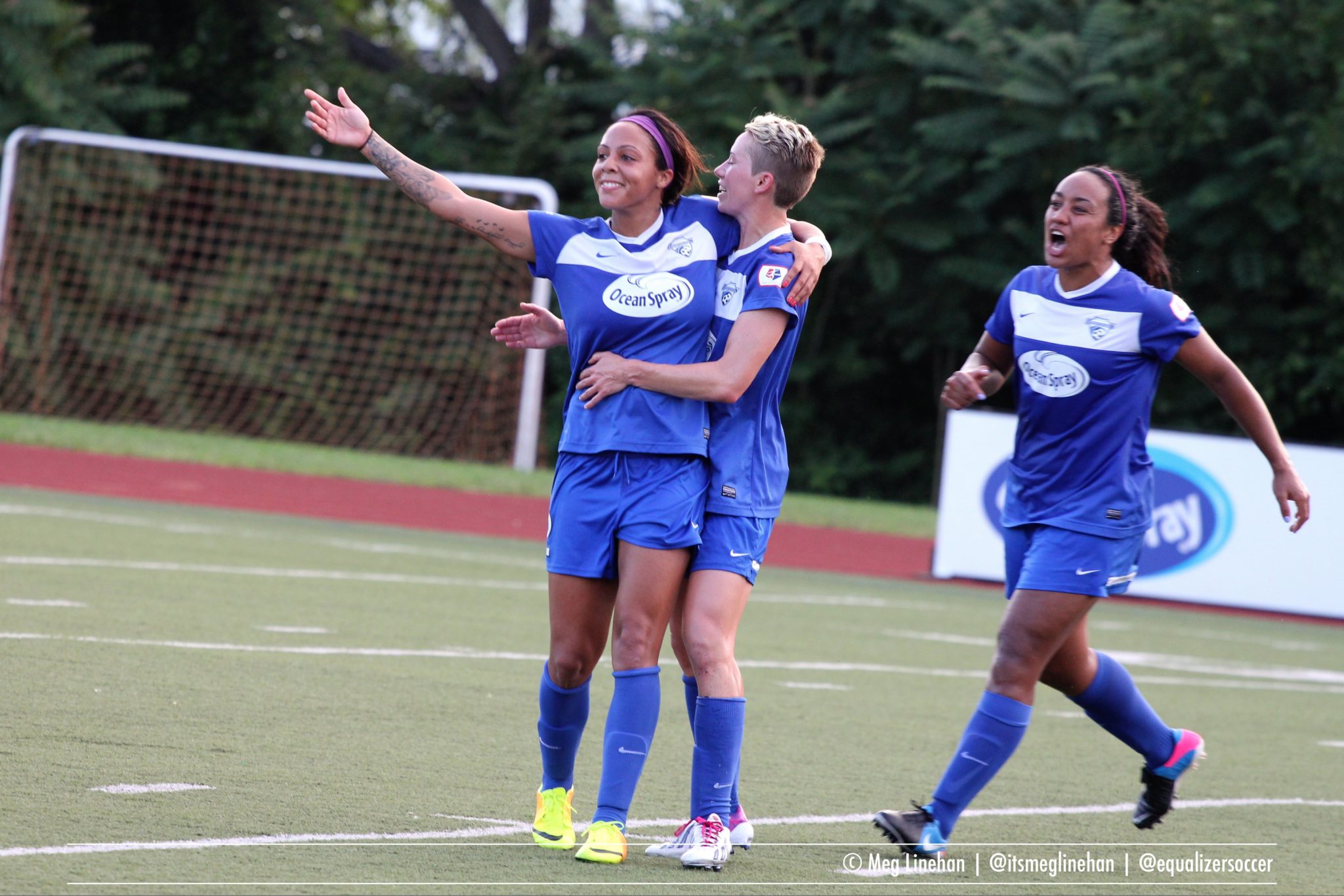 SOMERVILLE, Mass. — Entering the game winless in their last five games and off the heels of losing to the previously winless Seattle Reign FC, the Boston Breakers needed a positive start vs. Sky Blue FC.

They got exactly that — and the three points.

Sydney Leroux scored twice in the opening 45 minutes — including a cracking half-volley from 25 yards out — and Boston beat Sky Blue FC 3-2 on Sunday at Dilboy Stadium. 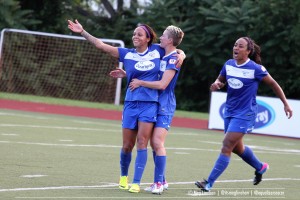 Sydney Leroux celebrates her second goal of the night against Sky Blue FC with Joanna Lohman. (Photo copyright Meg Linehan for The Equalizer)

The eventual game-winner came in the 41st minute, when Leroux unleashed a wonderful strike that tucked just inside of the far post for Boston’s third goal of the night.

A hectic four-minute stretch of the first half just prior to the winner produced three goals between the teams, starting with Leroux’s wide open tap-in in the 29th minute. Sky Blue FC, however, responded less than two minutes later when Monica Ocampo’s flick-on header played Sophie Schmidt in behind the Breakers’ defense. Boston goalkeeper Alyssa Naeher came well off her line and Schmidt calmly chipped the ball over Naeher for the equalizer.

But the Breakers answered back immediately. A Heather O’Reilly corner kick found the head of a rising Mariah Nogueira, who placed the ball back toward where it came from and into the top corner to give Boston a 2-1 lead in the 35th minute.

In the second half, Sky Blue FC scored a near carbon copy of their first goal in the 58th minute, this time with roles reversed. A long ball over the top found Schmidt, who fired a low shot that Naeher saved, but she spilled the rebound and Ocampo was there to tap in the rebound and cut Boston’s lead to 3-2.

Ocampo nearly found the equalizer in the 88th minute with a right-footed strike from 15 yards out, but Naeher came up with a big save. Twenty minutes prior, Leroux had a chance at the hat trick after tapping the ball around Cameron, but Leroux’s shot from a tight angle went wide.

The game ended on an even more sour note for the visitors when Schmidt was sent off in second half stoppage time for throwing the ball at new Breakers signing Jazmyne Avant.

Tough lose tonight. First red card of my life. Honestly didn't mean to do that. Sorry team and fans!

The loss snaps a three-game unbeaten streak for Sky Blue FC (8-3-3, 27 pts.). They next host the Washington Spirit on Saturday. Boston (4-5-3, 15 pts.) plays at Seattle on Wednesday and at Portland on Saturday. Sky Blue and Boston meet again in New Jersey on July 13.