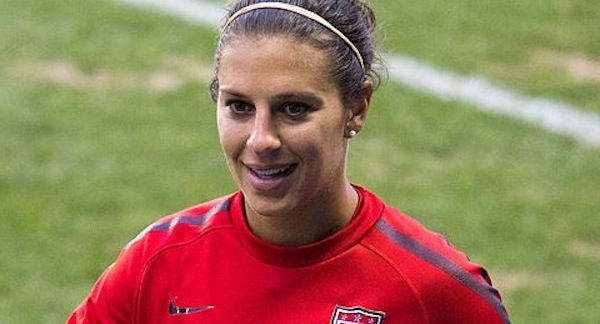 ROCHESTER, N.Y. — A hat trick by Carli Lloyd and a stoppage time goal by Brittany Taylor secured the Western New York Flash a 4-0 win against the Washington Spirit on a rainy Friday night at Sahlen’s Stadium.

“I had great assists from Alex and Abby; collectively it was a great team effort,” said Lloyd, describing her goals. “When we put the ball down on the ground and possess it, that’s when we’re at our best.”

The Flash started off strong with a goal in the 3rd minute. Sarah Huffman found an oncoming Alex Sahlen, who was making a run to the corner and then crossed it into the box, where Lloyd finished with a header.

Lloyd scored again in the 22nd minute after Abby Wambach crossed a low ball into the box, where Lloyd knocked it past Ashlyn Harris.

“How are you going to give someone like Carli Lloyd the amount of space and time she had today on the ball?” questioned Harris after the game, as she expressed her frustration and disappointment with the loss.

The Spirit pressed hard, but were unable to find the back of the net. Offensively, they had some nice sequences with Conny Poehlers, Tori Huster and Jasmyne Spencer, but their finishing touches were not strong enough to get past Flash goalkeeper Adriana Franch.

In the 55th minute, Harris came out to make a save, but the ball slipped under her and Lloyd leaped over her and tapped the ball into the back of the net for her third goal of the night.

“I remember winning the ball in midfield and playing it to Abby,” Lloyd said. “Abby laid a great ball though and I got my toe on it and Ashlyn made the save, but it went underneath her and I followed it up and finished it off.”

Just as the clock approached 90 minutes, it was announced that there were two minutes of stoppage time. Within those two minutes the Flash were able to swoop one last goal in off of a corner kick. Wambach was able to get her head on the ball and direct it towards Taylor, who drilled the ball into the back of the net.

“I’m super proud of her,” said Wambach when asked about Lloyd’s goals. “She’s been working relentlessly to practice her shooting on goal and she put herself in great positions to score goals in different ways today.”

The Flash are on the road for their next 4 games. They’re slated to play the Chicago Red Stars on July 4th at 2:00 p.m. ET.

– Ingrid Wells, who was waived by the Spirit last week, made her Flash debut tonight when she subbed in for McCall Zerboni in the 59th minute.

– Washington Spirit coach Mike Jorden announced that Caroline Miller will be out the rest of the season due to an ankle injury.