A Tale of Two Cities: Seattle up, Boston down 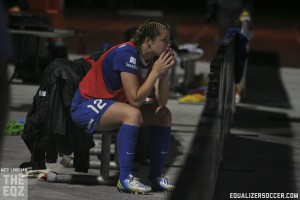 SOMERVILLE, Mass. — John McCloskey blew three blasts on his whistle four minutes and twenty-three seconds into stoppage time.  It only took another five or ten seconds for a swarm of white shirts to surround Seattle Reign FC captain Keelin Winters, players with arms outstretched and a clear mix of happiness and relief on their faces.

Seattle had certainly deserved to win a game before Wednesday night’s match at Dilboy Stadium, but the breakthrough finally came at the expense of the beleaguered Boston Breakers.  As Hope Solo patted her defenders on the back, exchanging congratulations and telling her younger teammates that they had earned the win, a deflated Boston side drifted back to the bench.

Solo and head coach Lisa Harvey spoke with media after the game, and finally had the easier task of focusing on the positives of a win, rather than the positives of a narrow loss or draw.  Their counterparts in the media scrum, Cat Whitehill and Lisa Cole, essentially had a repeat of their interviews after the June 16th loss to Sky Blue FC.