The View from the North: Canadians still seek better funding 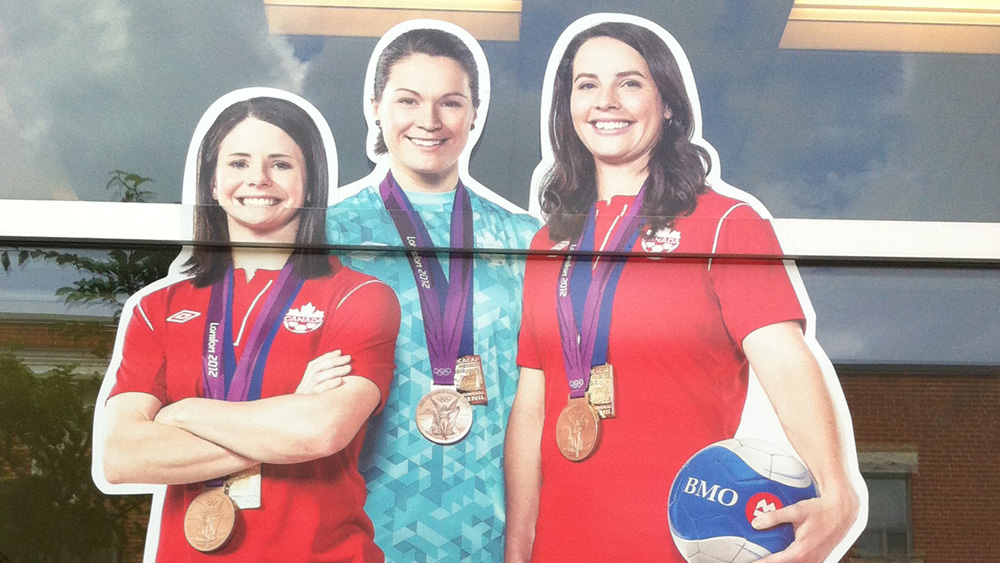 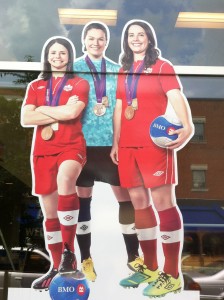 In order to help better fund players, the Canadian women need more advertising like this display window at a BMO Bank in Toronto. (Photo: Duane Rollins)

It was pure happenstance that theScore media’s Sean Keay found himself sitting beside Sydney Leroux at a Toronto Blue Jays spring training game a few years ago.

As Keay has deep connections in the Canadian soccer world he couldn’t help but strike up a conversation with Leroux, who by that time she had already made her decision to leave the Canadian program in favor of the US.

As Keay tells it, Leroux was blunt about her decision. At it’s root it was about opportunity, but not the type of opportunity that most Canadian fans accuse her of. Leroux wasn’t ‘glory hunting’ for gold medals or World Cup titles. No, she was after something more basic.

It was Leroux’s goal to be a full-time professional soccer player and she simply didn’t see how that was possible while remaining in the Canadian program, Keay recalls her saying.

Around the same time, a meeting was happening in Canada between members of the Canadian national team and a major sports marketing firm. The topic of conversation was finding corporate sponsorship deals for the women, who were surviving on around $20,000 a year in Olympic funding.

The message they were told had been widely reported in Canadian soccer circles since: they were worth nothing, the marketer said. Not a cent, with one possible exception.

He proposed that maybe if they were willing to do one of those risqué calendars — like the one Canada’s women’s rugby team eventually did — he could help. It would be tasteful, of course, was the promise.

The women walked away. Sadly, the marketer’s words mostly turned out to be mostly true thus far. With the exception of Christine Sinclair (Tide) not a single member of the national team has managed to find significant corporate money in the days since.

What these two anecdotes illustrate is one of the biggest issues facing the women leading up to the World Cup: Where are they going to find the money?

It’s great that the NWSL is giving 16 Canadians an opportunity, but it does little to help the program’s depth. And, even those that are lucky enough to find NWSL spots are still making less than what the American players make — and not much at all, on the whole.

We like to think that money doesn’t dictate results in women’s sports, but just because the scale is smaller than you’ll find on the men’s side doesn’t make that true.

Corporate Canada is quick to jump on successes when it benefits them — and the team itself has received some money — but the individual athlete still struggles to find direct funding.

Until that changes, Canada will struggle to bridge the gap with the Americans and other top sides.

NOTES: Christine Sinclair was named to Canada’s Walk of Fame this week.

She will be joined by cancer activist/athlete Terry Fox, actor Alan Thicke and pianist Oscar Peterson among others.

The induction is on Sept 21 in Toronto.