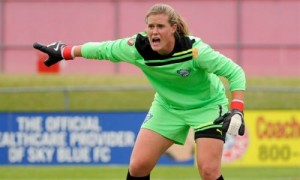 Week 12 kicks off with a pair of Wednesday matches.  FC Kansas City will try to join the party battling for first place in the table while the Reign will try to build off their draw on the weekend and finally collect their maiden win.  Here is a closer look:

Quick Look:  The Reign are still looking for their first win but they did snap a nine-match losing streak with a 1-1 draw Sunday at the Flash.  The fallout is that Kiersten Dallstream took a red card and is suspended for this one.  The Breakers should be well-rested after being off Week 11.  Alyssa Naeher is projected to earn her first NWSL start in goal for a Breakers side that has yielded 11 goals during a four-match winless streak.

Tactical Short:  Could we see a Megan Rapinoe/Heather O’Reilly matchup on the flank? Rapinoe completely changed the Reign’s midfield despite having not trained with the team prior to Sunday’s match in Rochester, N.Y.  If the Breakers don’t contain her in the middle she’ll be a daunting task for their young outside backs to deal with.

Quick Look:  FC Kansas City are seven points back of Sky Blue and Portland and despite having a game in hand it would be a tall task for them to make up 10 points in 10 matches if they drop this one.  First time around they got the better of the midfield battle but went down a goal and a player inside 25 minutes and Sky Blue defended their 1-0 lead the rest of the way.  Both teams played on the weekend and Sky Blue has an extra day of rest plus no travel, but they will be trying this one without Lisa De Vanna.

Tactical Short:  The key to this match might be whether Sky Blue can contain Lauren Cheney, who has been the most dynamic midfielder in NWSL so far, combining the ability to hold the ball up with a finishing touch.  When she holds on to the ball it allows other attackers including the outside backs to sneak forward and put additional pressure on opposing back lines.  Sky Blue’s defensive unit has been great but Christie Rampone played a match and a half over 48 hours ending Saturday night.  It will be up to Manya Makoski to slow down Cheney and take some pressure off the backs.

The Lowdown: What we learned in Week 11
The View from the North: Canadians still seek better funding