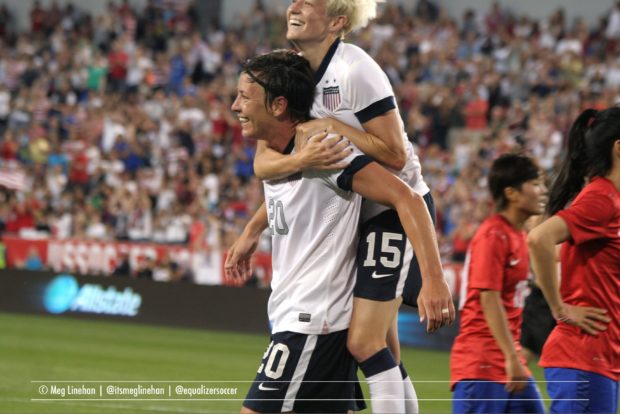 HARRISON, N.J. — Abby Wambach is the new all-time international goal scoring record holder after scoring four goals against Korea Republic on Thursday night at Red Bull Arena. Those gave her 160 career goals, breaking Mia Hamm’s old record of 158 and sending the United States women into a bench-clearing celebration well before the final whistle of a 5-0 win.

“It’s special. I could tell my teammates were trying to get me those goals,” Wambach said.

Wambach had four goals by halftime and a hat trick inside the half-hour mark. Her first goal came with her right foot, followed by two headers and a first half stoppage time goal with her left foot.

Wambach did most of the work on the first goal, turning Korea Republic captain Shim Seoyeon and firing a shot past goalkeeper Kim Jungmi in the 10th minute. Wambach then headed a Lauren Cheney cross into the goal nine minutes later to tie Hamm’s record and broke the all-time mark on another header off a corner kick from Megan Rapinoe.

She capped off her night in first half stoppage time by tapping in a low cross from Alex Morgan.

“It’s Abby Wambach. She always has a chance of just being Abby, doing her thing,” Morgan said. “Scoring with her head, with her feet. It doesn’t matter what it is. We definitely thought that this could be the game.”

Hamm was not in attendance, but the moment wasn’t lost on her.

“I’m just so proud of her. Just watching those four goals, that’s what she is all about. She fights for the ball, she’s courageous and she never gives up. Her strength and perseverance is what makes her so great and it’s what defenders and opposing teams fear. From being her teammate early in her career, I know all she ever wanted to do was win and she continues to do that. I’m just glad I got to share 158 with her. It was short, but it was fun.”

U.S. coach Tom Sermanni summed up the night in one word: “fairytale.”

Here is a photo timeline of all four of Wambach’s goals (photos copyright Meg Linehan for The Equalizer): 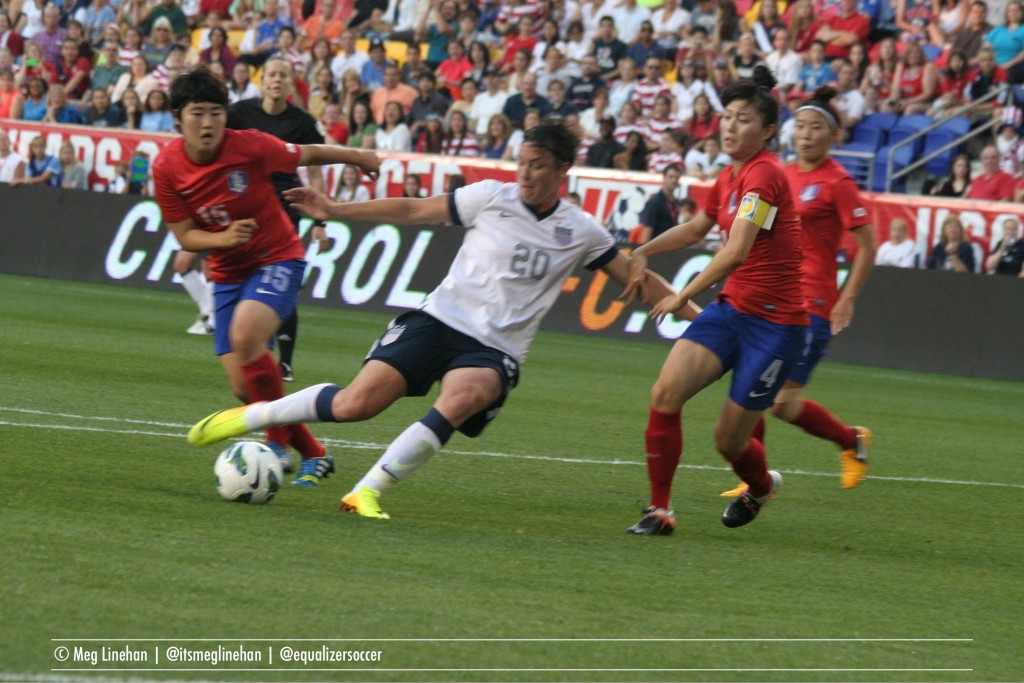 Abby Wambach comes within one of Mia Hamm's record, with her 157th goal. (Photo copyright Meg Linehan for The Equalizer.) 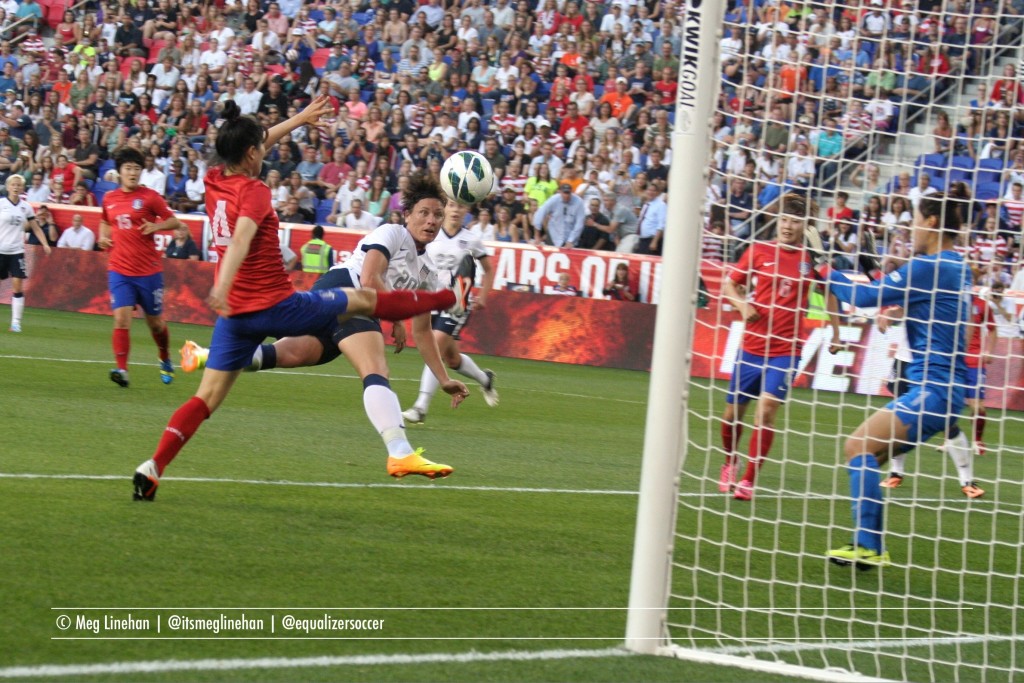 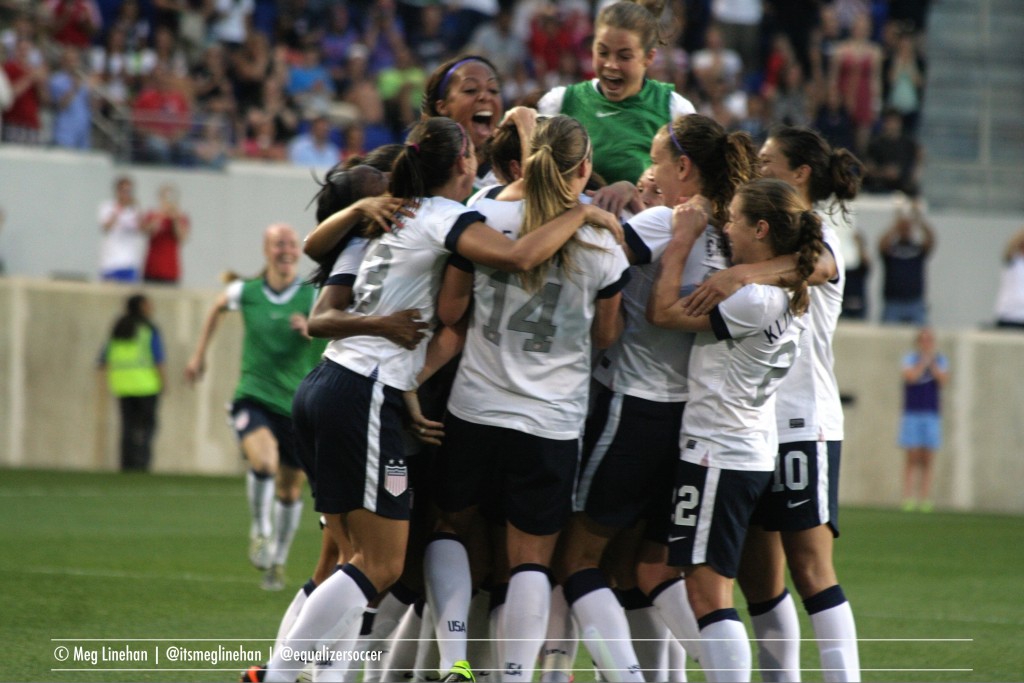 Even the substitutes came off the bench to celebrate with the U.S. women's national team as Abby Wambach surpassed Mia Hamm's record with her 159th goal. (Photo copyright Meg Linehan for The Equalizer.) 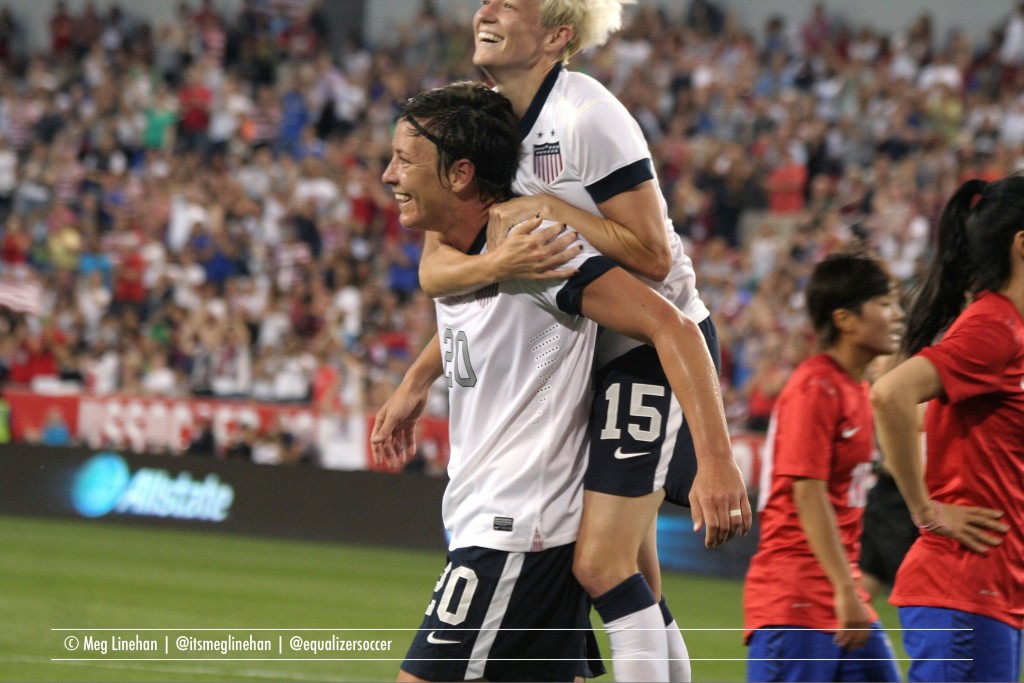 Megan Rapinoe celebrates with Abby Wambach after she scores one of her four goals, passing Mia Hamm's all time scoring record. (Photo copyright Meg Linehan for The Equalizer.)

The View from the North: Long way to go for Canada
NWSL Week 11 preview