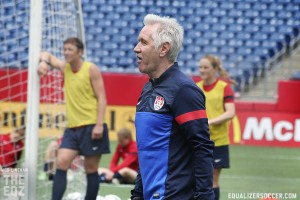 Tom Sermanni speaks with the team as open training at Gillette Stadium wraps up. (Photo copyright Meg Linehan for The Equalizer.)

FOXBORO, MASS. — Before the U.S. women’s national team took the field at Gillette Stadium, head coach Tom Sermanni spoke with media on his first sixth months on the job.

Notably, he said it’s been easy to call up college players such as Crystal Dunn and Julie Johnston, as well as this week’s newcomer Morgan Brian of the University of Virginia.  He also highlighted the pros and cons of national team players who opt to play in Europe, including the challenges of keeping up with their development.

When asked by The Equalizer, Sermanni did confirm that there are players in the National Women’s Soccer League that could be called into camp at some point.

“There have been a few players who have kind of caught my eye.  At some stage, we’re hoping to have a look at—whether we can organize a camp and bring some players in and see how they go in amongst this squad.  You know, the difficult thing is, this is a very competitive squad.  You need to stand out, you need to stand out consistently.  So the key thing for me, getting out to the NWSL games, is to see players who, you know, after 15, 16, 17 games are still performing at a high level and still performing consistently.”

Watch the full video of Sermanni speaking with the media: