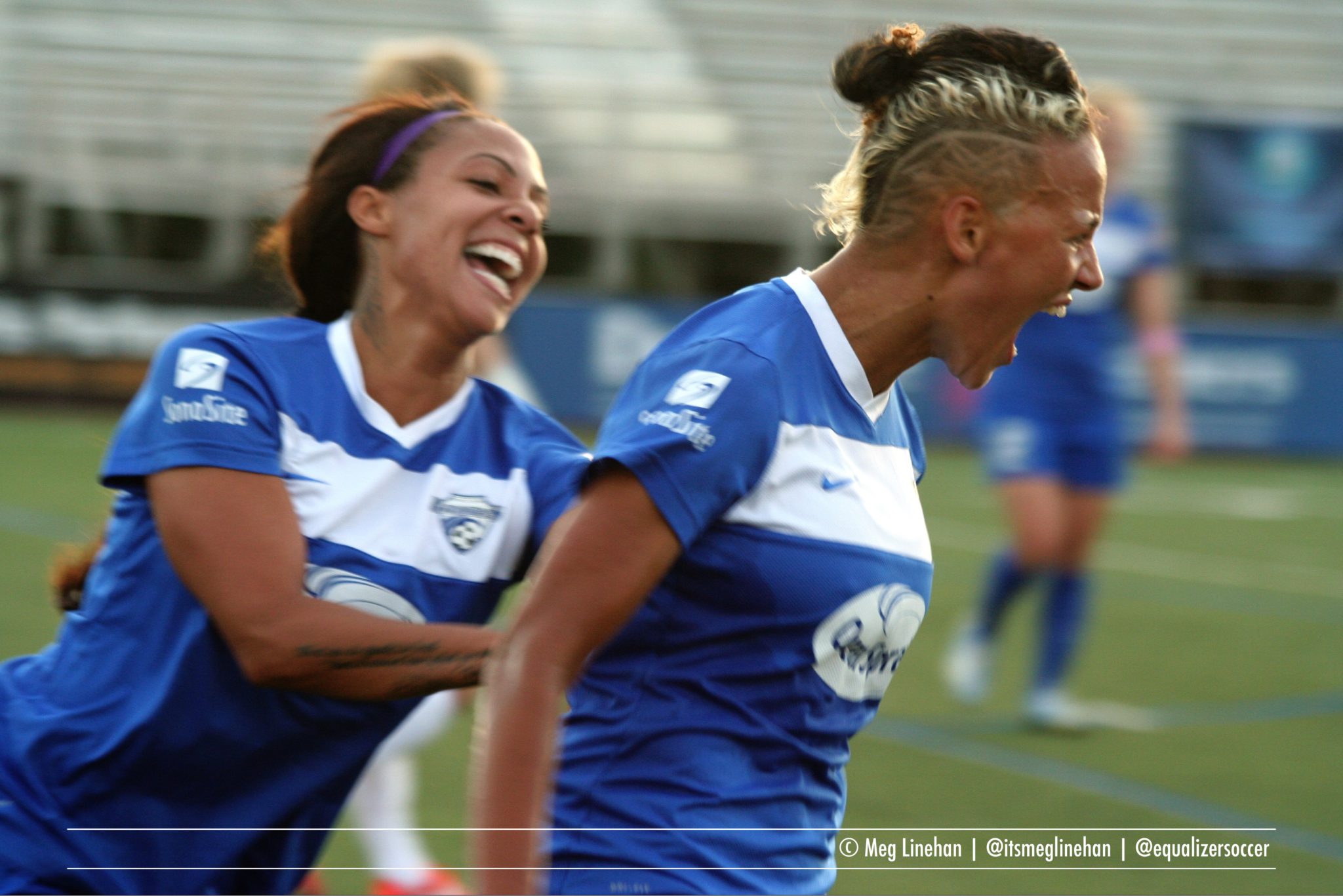 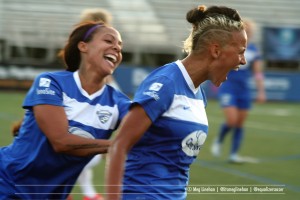 Sydney Leroux and Lianne Sanderson both scored for Boston on Wednesday in a 2-2 draw with the Flash. (Photo copyright Meg Linehan for The Equalizer)

SOMERVILLE, Mass. — Jodi-Ann Robinson scored in the final seconds to give the Western New York Flash a share of the points in a 2-2 draw with the Boston Breakers on Wednesday night at Dilboy Stadium.

Robinson headed the ball into the back of the net over Breakers goalkeeper Ashley Phillips in the third minute of second half stoppage time to give Western New York a point on the first of four straight road games in 15 days.

Wednesday’s match was the first in a stretch of eight out of the next 10 games on the road for the Flash, spread over the course of five weeks.

“Tonight’s a little bit of a heartbreaker,” Breakers coach Lisa Cole said. “I thought we played well enough to win.”

Robinson headed the ball into the far upper corner off a Katherine Reynolds cross. The ball had popped out to Reynolds after a Veronica Perez corner kick.

“The back line in general was pretty good today,” Cole said. “The problem on the last one is we should have been out. We cleared it and thought time was over because it had been almost four minutes at that point and there were only three minutes of extra time. We’re looking at the clock and thinking the game is over.”

Wambach scored the opener for Western New York in the 28th minute with a perfectly redirected header over Phillips. Sam Kerr provided the curling right-footed cross to Wambach, who out-jumped Breakers defender Kia McNeill and flicked the ball over Phillips.

The goal was Wambach’s fifth of the season, tying her for the league lead with Sky Blue FC’s Sophie Schmidt and Leroux, who scored her fifth on the night as well.

Lianne Sanderson leveled the game for Boston in the 44th minute with the outside of her right boot, redirecting a left-footed Heather O’Reilly cross. O’Reilly exited the game after halftime after playing 90 minutes for the U.S. on Sunday vs. Canada.

In an NWSL first, referee John McCloskey had to be replaced in the middle by fourth official Boris Senic in the 36th minute. McCloskey twisted his right ankle in the 10th minute and could not continue.

“This is the first time I have seen that, actually,” Cole said of the referee substitution.

Watch the post-game video with Sydney Leroux, Cat Whitehill, and Lisa Cole of the Boston Breakers and Abby Wambach and Aaran Lines of the Western New York Flash: