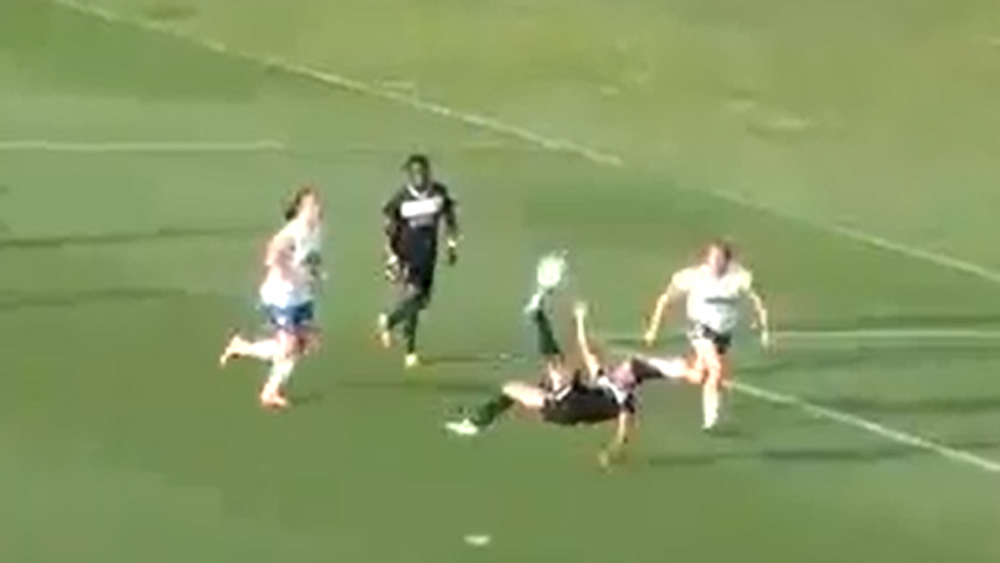 PISCATAWAY, N.J. — Lisa De Vanna had two goals and an assist including a bicycle kick goal that electrified Yurcak Field and Sky Blue FC rolled to a 5-1 victory over the Boston Breakers.  Sky Blue notched three goals over the first 17 minutes and cruised home from there despite the absence of internationals Christie Rampone, Sophie Schmidt, and Kelley O’Hara.  The only down moment was when Adriana Leon scored for the Breakers in the 75th minute to snap Sky Blue and Brittany Cameron’s shutout streak at 435 minutes.

“I think we showed today that we have some depth and we have players that are ready to step in when called upon and take care of their role pretty well,” Sky Blue coach Jim Gabarra said after watching his team win their fifth consecutive match.

The new starters included Maddie Thompson subbing into central defense for Rampone and Taylor Lytle and Monica Ocampo stepped in for Schmidt and O’Hara.  But the star of the night was De Vanna and her spectacular goal resonated through the stadium long after the final whistle.

“I was a bit overwhelmed and shocked from it,” De Vanna said.  “I didn’t even realize it went in, I just saw Danesha (Adam)’s face and she was so surprised and I just looked up and seen it went in the back of the net and I was just thinking, ‘oh my God I’ve just pulled something incredible.’”

Even Breakers defender Cat Whitehill, who acknowledged De Vanna should not have been left unmarked, said, “At that point all you can do is…” as she gently clapped her hands together.

The match was just seven minutes old when De Vanna found Adams on the right side of the box and Adams was able to beat Ashley Phillips near post to give Sky Blue a 1-0 lead.  Sky Blue right back Caitlin Foord created the play with another strong run up right flank.  De Vanna’s bike doubled the lead in the 14th minute and in the 17th Little joined in the fun by beating Phillips off a pass from Katy Freels.  It was the second assist in three minutes for Freels, whose chip over defenders to set up De Vanna’s bicycle was lost in the finish.

“The little flip pass by Katy was awesome,” Gabarra said of Freels.  “You’re seeing her strike balls now where maybe she was maybe a little hesitant and holding onto the ball a little longer.  She’s starting to pick up the pace and the tempo of the league.”

On the De Vanna goal he said, “I think everyone was just stunned by it.  Lisa start(s) to do a bike and you’re like ‘what are you doing’ and next thing you know the ball’s in the back of the net.  It’s certainly SportsCenter material and one of the best goals you’ll ever see in the women’s game.”

The Breakers settled into the match after 17 minutes and nearly pulled one back at 29 minutes when Cameron lost control of the ball on a throw out of her box and the Breakers grabbed it only to see Simon miss wide.  They had another chance three minutes later when Katie Schoepfer sent a dangerous shot wide.

The fourth goal was De Vanna’s second and came in the 56th minute when Adams put her through on a breakaway against Phillips.  De Vanna dribbled around Phillips and had an easy touch for her second goal of the night and fourth of the season.

“That’s what I practice in training every day,” De Vanna said after saying she did not practice bicycle kicks.

The Breakers’ goal came when Leon put in a rebound after Cameron made a save off the crossbar.  The teams traded penalty attempts in the late stages.  Adams converted for Sky Blue in the 85th and Boston’s Lianne Sanderson was stopped by Ashley Baker in stoppage time.

Gabarra put Baker in for the last minute plus stoppage time, giving the rookie from Georgia a few moments of game action before Jill Loyden returns to the fold.

“I thought about it at halftime,” Gabarra said.  “Once Jill comes back she’ll probably be down to No. 3 and it was a good chance for her to get some time.  I certainly didn’t expect for her to have to step up and save a penalty.  So it was a great moment for her to shine and a reward for her hard work in training.”

– Cat Whitehill on finishing chances:   “They might have had like six or seven chances but they finished them all.  That’s the difference between being top of the league and where we are right now.”

– Lisa Cole made an interesting substitution when she took Lisa-Marie Woods out barely a minute into the second half in favor of Maddy Evans, a 22-year-old amateur player who was added for the match due to international absences.  “I was going to give Woods a little more time but just for a variety of reasons we decided let’s just go ahead and give Maddy a chance.  She’s an amateur player and we haven’t seen her in a game yet so we needed to get her some playing time and make some roster decisions as well.”

– The Breakers sorely missed Heather O’Reilly on the flank.  Sky Blue were clearly the better flank team on the night.

– Five goals is an NWSL first as was the in-game goalkeeper sub.

WATCH the full replay of the match:

Winless no more: Chicago breaks through in Portland
Video: US women welcome rivalry with Canada