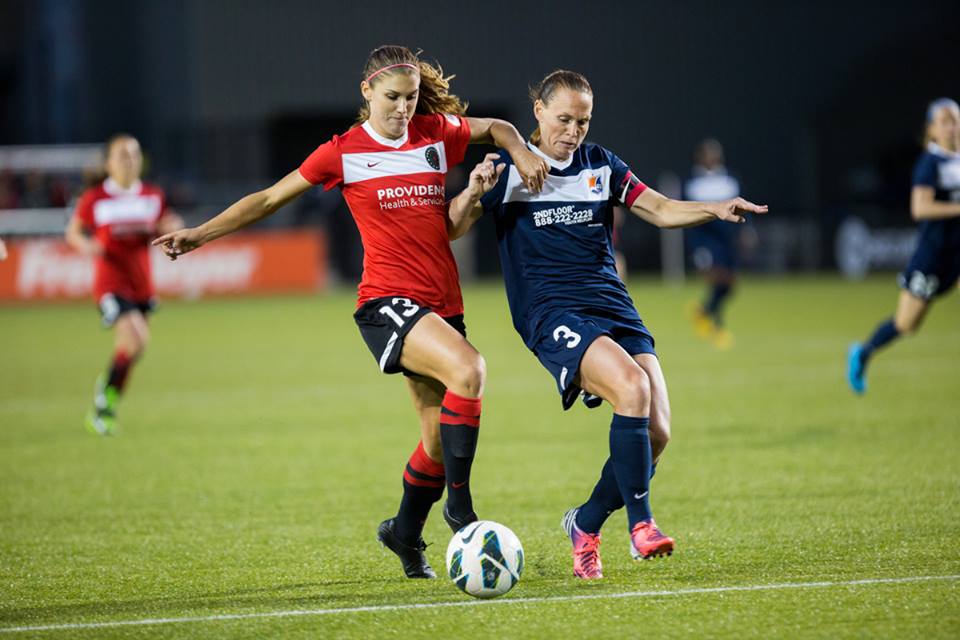 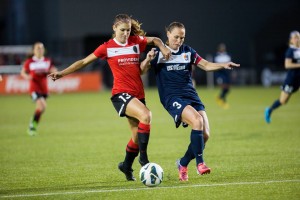 Christie Rampone and Alex Morgan will miss their club's NWSL matches this weekend and will face Canada in an international friendly. (Photo courtesy of David Blair/Portland Thorns FC)

This is the week we have been waiting for in NWSL—or waiting to avoid.  Sunday’s Canada-US friendly has decimated club rosters but four of the eight NWSL sides are in action Saturday evening.

Quick Look:  Sky Blue return home after sweeping a three-match road trip during which they did not concede a goal.  Both the win and shutout streaks are at four overall but they will be challenged in back for this one without center back Christie Rampone.  Sky Blue will also be without Kelley O’Hara and the league’s leading scorer, midfielder Sophie Schmidt.  On the flip side the Breakers will be without Heather O’Reilly, Sydney Leroux, and Rhian Wilkinson.  Of those only O’Reilly has played every match.  Leroux was benched last weekend against the Spirit.

Tactical Short:  With Sky Blue down a central midfielder (Brittany Bock is hurt and not likely to fill in for Schmidt) and central defender the Breakers could try to use Kyah Simon’s speed and work rate to disrupt what will be a young and relatively inexperienced back line without Rampone.  On the flip side one of those young defenders, Caitlin Foord, will be looking to push forward without O’Reilly to worry about on either flank and with a pair of young Breakers defending the outside.

Quick Look:  The Red Stars have begun to look overmatched as they search for their first win in NWSL.  The good news is that they should have Inka Grings and Sonja Fuss, both earlier signings who played out the German season and arrived with the Red Stars just over a week ago.  Meanwhile the Thorns will be without Christine Sinclair, Alex Morgan, Rachel Buehler, and Karina LeBlanc.  That means Adelaide Gay will make her pro debut behind a back four minus its leader, Buehler.  The Red Stars have no healthy U.S. national team players but are down Rachel Quon and Carmelina Moscato on the backline and Erin McLeod in goal.

Tactical Short:  This one has the look of a grinding, midfield battle where both teams try to push it up the middle.  The decisive space may wind up being in the Red Stars attacking third where Lori Chalupny will be trying to work her magic against Becky Edwards.

Quick Look:  What was mostly a paper rivalry driven strictly by geography exploded into reality at last summer’s Olympic Games when the U.S. survived a hat trick from Christine Sinclair to win 4-3 in extra time.  That Canada thought (and thinks) they were jobbed by some dubious officiating was not the fault of the United States, but has added fuel to the fire.  Canada is home to the 2015 World Cup and they are using this match as something of a testing ground to see how their players react to playing in front of a packed house where nearly everyone is pulling for the Maple Leaf.

Tactical Short:  Canadian midfielders Diana Matheson, Sophie Schmidt, and Desiree Scott have been among the very best in NWSL over the first two months and they should combine to give the hosts some edge in the middle of the park.  They’ll need it.  Christie Rampone is playing world class soccer in back and will be leading the efforts to contain Christine Sinclair.  Meanwhile defense is the Canadians’ Achilles heel and they can ill afford mistakes against the likes of Abby Wambach and Christen Press.