SOMERVILLE, Mass. — The Boston Breakers showed the National Women’s Soccer League their depth on the attack on Saturday night as they shut out the Washington Spirit, 3-0. On a cold and rainy evening, 1,246 showed up at Dilboy Stadium, ending the Breakers’ sell-out streak.

While the game was the Breakers’ best match as a cohesive team so far this season, the big story of the night may inevitably prove to be Breakers coach Lisa Cole’s decision to start Kyah Simon and Katie Schoepfer, and keep Sydney Leroux on the bench.

“That was just a decision based on some of the things we’ve seen in the past game,” Cole said. “Syd’s been good for us, but we needed a collective team effort.

“We’re six games into the season,” Cole started, before changing directions. “There were just a bazillion reasons. [Leroux]’s going into national team camp, we have to get other people time, Kyah [Simon] is finally healthy. We just decided to mix things up, and she’ll be back on the field when she’s back from national team camp.” 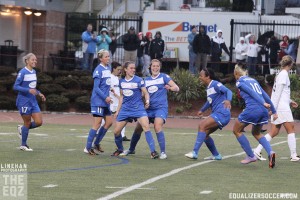 Heather O'Reilly celebrates her third goal of the season in the Breakers 3-0 win over the Washington Spirit. (Photo copyright Linehan Photography for The Equalizer.)

In the end, the depth beyond Leroux was apparent as three different players scored, and Adriana Leon, Lisa-Marie Woods, and Kate Howarth all earned minutes.

The Spirit had seven shots on the night, but not a single one was on goal. The team never seemed to find any sort of groove past its own midfield, despite the best efforts of Diana Matheson and Lori Lindsey attempting to string together any sort of meaningful possession.

While the Spirit did have a few notable chances at speedy counterattacks, the final touches were completely lacking and the Breakers seemed better prepared to shut them down defensively than in the two previous meetings between the teams, both of which ended in 1-1 draws.

The opening minutes of the match did not look promising for either team. Between the rain and the slick turf at Dilboy, both teams were unable to pass accurately or move the ball well enough to threaten at either end.

By the 30th minute, however, the Breakers had settled into the match and moved into attack mode. With Kyah Simon returning to her starting position, she seemed to be everywhere on the field on both sides of the ball.

It was Kyah Simon who started the play that would lead to the first Breakers goal in the 38th minute. She retrieved the ball after being dispossessed by Washington, and fed it into Lianne Sanderson, who flicked it over her shoulder to Heather O’Reilly, who was streaking into the box. O’Reilly rocketed it past Spirit keeper Chantel Jones for her third goal of the NWSL season.

Sanderson assisting would become the theme of the night, with the Breakers’ playmaker notching three, for a league-leading six total after tonight’s match. Sanderson said after the game that she was happy with her own performance and the role she’s playing on the field.

“I actually get a lot of joy out of assisting other people. I know a lot of people say that, but I haven’t actually scored this year, which obviously I want to score some goals. At the same time, as long as the team wins and I keep assisting like I am I’m happy to do that.”

The Breakers and Spirit went into the break at 1-0, though Kyah Simon nearly had a goal of her own in stoppage time. With O’Reilly providing the pass, Simon was left unmarked and was rejected by the post to keep the lead at 1-0.

After a flurry of pressure from Boston to start the second half, which at one point nearly resulted in a Spirit own goal had the bounce gone differently, Sanderson once again found a Boston attacker, this time setting up Katie Schoepfer for the easy put away in the 53rd minute.

Simon finally found the back of the net when she scored the third and final goal of the evening in the 66th minute. Her contributions to the team tonight were much more than a single tally though, as her play on both sides of the ball was one of the major contributing factors to keeping the Spirit unbalanced.

Jones came up big for the Spirit on a number of shots, most impressively saving a penalty kick in the 78th minute. With Washington called for a handball in the box, Schoepfer stepped up for Boston. Her shot was a bit weak (perhaps still feeling the effects of a foul suffered a few minutes earlier), but Jones still made the right call and came up with the save.

That was nearly it for the Breakers for clear offensive opportunities, though substitute Lisa-Marie Woods put a shot on goal that rolled just inches wide in the 83rd minute.

The Spirit will have plenty of time to erase this one from the memory banks, with their next game not until June 15. After the match, Lindsey described the next steps for the Spirit. “Get the team back. We’ve had a lot of games in a little bit of time, so get healthy. We’ve got a little bit of a break so people can rejuvenate.”