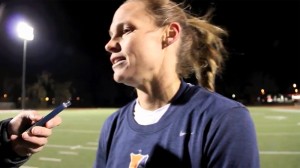 In the first Thursday-Sunday Pacific Northwest road trips in NWSL history, it was a pair of players on those road trips that stood out in Week 6 of National Women’s Soccer League play: Christie Rampone and Ali Krieger.

Both received significant votes, but Rampone ultimately is The Equalizer’s Week 6 Player of the Week for her role in Sky Blue FC’s 1-0 victory over Portland Thorns FC on Thursday and a 3-0 win over Seattle Reign FC on Sunday.

Rampone was a key part of a Sky Blue FC gameplan that neutralized Portland’s potent attack and, in particular, helped shut down Alex Morgan throughout Thursday’s match.

The six-point road trip for the New Jersey club puts them tied atop to the table with Portland (16 pts. each) with the exact goal differential. Sky Blue FC own the head-to-head tiebreaker after Thursday’s win.

Rampone also played a role in Sky Blue’s third goal against Seattle on Sunday, delivering the free kick that was flicked-on for Taylor Lytle’s goal. The Sky Blue and U.S. national team captain has quietly been having an incredible start to the season as arguably the best center back in the league.

For her part, Krieger scored in a 4-2 win over Seattle on Thursday and was electric on the right flank vs. Portland on Sunday.