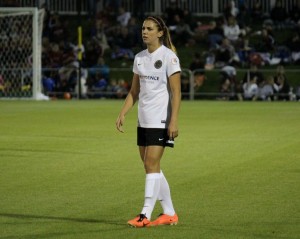 PORTLAND, Ore. – A first half goal from Christine Sinclair followed by Alex Morgan’s fourth goal of the season got Portland back in the win column, with Thorns FC bouncing back from their first loss of the season to defeat the visiting Washington Spirit, 2-0.

In front of 12,474 at JELD-WEN Field, Portland improved to 5-1-1, temporarily moving into first place pending Sky Blue’s Sunday night game in Tukwila, Wash. The Spirit, coming off their first win of the season, fall to 1-3-3.

While Portland looked the slightly stronger side in the opening moments, with a cutback from Morgan creating a near-chance in the eighth minute, Washington slowly came into the match. By the mid-point of the half, the Spirit were dictating play, able to get into their attacking third with ease through Ali Krieger down the right side. Either through crosses from Krieger or the occasional try on goal from their right back, Washington had developed into the more threatening side.

“Make no bones about it – Washington is a very talented team,” Thorns FC head coach Cindy Parlow Cone said after the game, asked about the Spirit’s success down with Krieger and Diana Matheson on the right flank. “You only talk about Diana and Ali, but all over the field they have quality players, and I think we saw that today.”

The Spirit’s control forced Portland to play on the counter, with a deep-dropping Sinclair getting multiple chances to orchestrate breaks as the match approach the 40-minute mark. Initially unable to connect with Morgan, Sinclair was left with speculative shots from outside the Spirit penalty area.

“I was trying to find open space, trying to drag the defender away or at least have her drop,” Morgan said of the first half’s failed counters. “[The defender] was either going to step to [Sinclair] or drop to me. She ended up dropping to me the first time, stepping to Sinc the second time. We were a little unlucky with our shots …”

In the 41st minute, Sinclair finally broke through. From outside the area and to the left of goal, Thorns midfielder Allie Long chipped a ball into the right of the box, finding Sinclair. Settling onto her left foot, the Portland captain got a shot off from 16 yards out, the ball sliding inside Chantel Jones’ right post for the opening goal.

Sinclair, however, after her chances from distance earlier in the half, gave Jones no chance to stop the owner, patiently waiting for the ball to fall to her left foot before burying her third goal of the season.

“I can’t say enough positive things about [Sinclair],” Cone said of her captain’s performance. “She does everything for the team … both on and off the field. If you see us needing for defense, she’s dropping and defending. If we need more attacking, she’s pushing forward, trying to get the goal or the assist or set up the attack.”

With their 1-0 lead, Portland briefly resumed control of the match out of half time, showing improved movement and connections through midfield. As the teams started making substitutions, Washington slowly became the aggressors, though to little avail. While the Spirit were occasionally able to cause panic in Portland’s defense, their forays never seriously threatened Karina LeBlanc.

In the other goal, the Spirit were without U.S. international goalkeeper Ashlyn Harris, who was held out of the starting lineup. Originally classified as a “coach’s decision,” the Spirit eventually clarified, saying Harris failed a late fitness test. Jones got her first start of the season.

As time wound down, it was Portland that generated the better chances. Substitute Angie Kerr forced a save from Jones, while a yellow card drawn by Morgan on Robyn Gayle allowed Marian Dougherty to put a late direct kick on goal.

In the 87th minute, Portland finally put the game away. Played behind the defense by substitute Courtney Wetzel, Morgan’s right-footed finish past an oncoming Jones gave Portland their final margin of victory.

For a Thorns FC side coming off their first loss of the season, the quick turnaround from Thursday’s loss to Sky Blue allowed the team to get back on track.

“After the loss, we were really down,” Morgan said, after the match. “It was our first loss. So we wanted this game right away. We wanted to have one a couple of days later, just to get our confidence back up, and I think we did that.”

Fatigue, however, was cited as a major factor in the game. Like Portland, Washington has only two days rest between Thursday’s 4-2 win at Seattle and Sunday’s match at JELD-WEN. But whereas Portland spent their recovery time at home, the Spirit were travelling down the Pacific coast, playing there second match in four days away from the Maryland SoccerPlex.

“Everyone saw the fatigue that both teams had in their legs,” Cone said. “It’s a difficult turn, to play Thursday-Sunday.”

“Both teams gave up some counterattacks, but that’s just the nature of playing [on short rest]. Washington had to travel, so they have that extra, added fatigue in them, too.”

Portland finished the match having put eight shots on goal to Washington’s three. Thorns FC also held the edge in total shots, 14-8 over the Spirit.