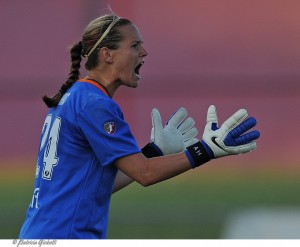 It is an axiom as old as the beautiful game itself.  Finish your chances, and you’ll win matches.  The Washington Spirit finally finished Thursday night in Seattle, and for their efforts they collected a long-awaited first NWSL win.

“We definitely finished,” coach Mike Jorden said a day after watching the webcast at home, the victim of emergency back surgery that prevented him from flying for the weekend.  “I think we were really dangerous getting forward.”

For a club that was not allocated a single striker, finding players to fill the back of the net has been a process.  Midfielder Diana Matheson scored in Thursday’s 4-2 win and now co-leads the league with Sydney Leroux, but half of Matheson’s four goals have been from the penalty spot.  Entering play on Thursday the only Spirit forward to score was rookie Tiffany McCarty on opening night.  McCarty is still the only forward to score but now she has two goals after burying the game-winner in the 56th minute on Thursday.

“I thought Tiff’s goal was a great individual effort bodying off a couple of defenders and sticking it in the corner,” Jorden said.

More importantly though the Spirit got two goals off free kicks, both credited to defenders.  Ali Krieger converted in the first half on a third effort that followed two remarkable saves by Michelle Betos.  The final goal was scored by Tori Huster, also off a free kick.

“I think so,” Jorden said when asked if spreading the goal wealth around will be essential to the Spirit garnering more victories.  “We talked about manufacturing goals and I think (Thursday night) was a good case of doing that.  I was happy getting two goals off of free kicks and just four different players scoring.  We’re going to definitely have to continue to do that to succeed.

Lori Lindsey was not among the four but she has emerged as the Spirit’s best player over the last two weeks.  The two-way midfielder took both free kicks—the first on goal that became the first of Betos’s saves—and drew one by drawing a foul about 20 yards from goal.

“She’s played a couple games in a row where she was very, very good.  She’s our leader and our captain.  We’re proud of her.”

Collecting three points in Seattle was key for the Spirit who had played well over their first five matches but had no victories to show for it.  After conceding a stoppage time equalizer opening night in Boston they played four straight at home and earned only two points.  Jorden says the low expectations for the team in pre-season have helped them attack each game with a positive mentality.

“I think our spirit and camaraderie as a team are really good,” he said.  “Because we are coming in under the radar we really don’t have much fear.  We go into each game pretty confident and I think that’s been building.”

On Sunday’s meeting with Portland, who won 2-1 at the SoccerPlex, Jorden said, “We know Portland’s going to be a good team but we’re just going to go in and have the same attitude we’ve had all season which is giving 110% and trying to get a result.”

Another lackluster defensive effort by the Reign certainly helped the Spirit’s cause on Thursday, but the only thing a team can do is beat the opponent in front of them on a given night.

“I’ve said all along that as our younger players learn the game and start contributing a little bit more each week we’re going to be a good team and that’s kid of how we’ve been progressing.  A couple of them didn’t play great (Thursday) night but overall we’re getting a little bit better each week and I’m happy with where we’re at.”