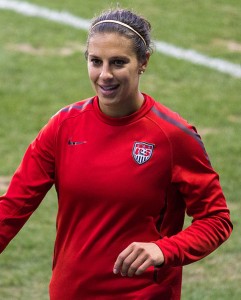 Carli Lloyd is cleared to play, but it is unclear if she will make her WNY Flash debut on Saturday.

The fifth weekend of the NWSL season features four matches, including a Mother’s Day evening affair in Chicago and the potential return of Carli Lloyd in Western New York.  Here is a closer look:

Quick Look:  Sky Blue will play a fifth consecutive match against a side looking for its first victory.  Wednesday’ draw against the Red Stars left the Reign by themselves on the bottom of the table and if they do not start scoring goals it could be an extended stay.  They will have the benefit of an entire week of rest while Sky Blue will be on just two days of full rest heading into the match.

Tactical Short:  The Reign play steady defense but have had next to no possession in the attacking third.  Meanwhile Sky Blue’s outside back tandem was heavily involved Wednesday (a 1-1 draw with Chicago).  Kendall Johnson assisted on the goal and Caitlin Foord hit the crossbar at the end of a dynamic run of better than 40 yards late in the match.  Can the Reign do enough to contain Johnson and Foord?

Quick Look:  The Spirit were seconds away from opening their season with a win in Boston until Sydney Leroux tied it in stoppage time.  Four weeks later they are still looking for their first win while the Breakers have collected all six available points during that time.  The Breakers have a long history as rivals in Washington dating back to WUSA, but their most memorable visit was in 2009 when Alex Scott’s 5th minute red card led to a 1-0 Washington Freedom win that helped knock the Breakers out of playoff contention.

Tactical Short:  Lianne Sanderson has helped turn the Breakers midfield into one of the most dangerous in the league.  Will the Spirit have enough answers in midfield to help their young backline survive what figures to be a more lively attack than they saw on opening night?

Quick Look: The Flash, who claimed their first victory last week after defeating Sky Blue FC 2-1, will be facing an undefeated Kansas City. Flash midfielders Carli Lloyd and Sarah Huffman have both been cleared to play after suffering injuries. Lloyd, one of the two U.S. women’s national team allocations to the Flash, returned to training Friday, but it’s unclear whether she’ll be part of Saturday’s lineup or not.

Tactical Short: 19-year-old Australian midfielder Samantha Kerr has been a tremendous asset for the Flash – her speed and versatility along the flank has been solid in her last four appearances. With Kerr on the flank, be on the lookout for some great opportunities off her service, especially to Flash forward Abby Wambach. Kansas City has one of the best defensive lines in the NWSL with Becky Sauerbrunn and Lauren Sesselmann, along with defensive midfielders Jen Buczkowski and Desiree Scott, who have proved to be a dangerous pair, quickly stopping many offensive attacks.

Quick Look:  The Red Stars might be ready to lash out at the schedule makers who have them playing a second match in a row on short rest, each against a team benefiting from a full week off.  The effects were on display Wednesday in New Jersey when both Taryn Hemmings and Jackie Santacaterina had to come off early because of cramping.  The Thorns have had moments of looking ordinary but have not come close to losing since opening the season 1-1 in Kansas City.

Tactical Short:  The key to containing the Thorns appears to be getting pressure on their midfielders and forcing them into quick decisions.  Easier said than done, though.  High pressure can lead to chances for the opposition and the Thorns are loaded with attacking options starting with Christine Sinclair and Alex Morgan.