Lloyd returns, plus clarification on concussions 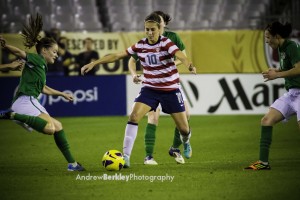 Carli Lloyd will practice with the Flash for the first time on Friday. (Photo copyright Andrew Berkley for EqualizerSoccer.com)

Carli Lloyd has been cleared to play and will train with the Western New York Flash for the first time on Friday. Lloyd broke a bone in her left shoulder in early March at the Algarve Cup but was cleared by doctors on Tuesday.

Lloyd tells Rochester Democrat & Chronicle’s Jeff DiVeronica that she is “ready to go” for Saturday’s home game vs. FC Kansas City. Lloyd is a world-class midfielder, but rushing her back on one day of training with the team doesn’t seem to make sense. The Flash are off next weekend and don’t play again until Friday, May 24, when they host Chicago. Targeting that date and giving Lloyd a full two weeks of training would seem to make more sense, but the possibility is out there for Saturday.

A lot has been made of concussions recently following Abby Wambach’s head injury and failure to come off the field in an April 20 tie with Washington. Ruben Echemendia’s name came up in the Slate.com article criticizing the NWSL for mishandling Wambach’s concussion. Echemendia is a neuropsychologist and concussion researcher who consults U.S. Soccer.

That caught my interest, as he is the same man who never cleared Lori Chalupny to play for the U.S. women’s national team, despite being able to play in WPS and, now, NWSL. For a few years I’ve described Chalupny as the best American player not on the national team, but her time there seems well over due to concussion reasons.

But why then is she fine to play in the NWSL, which is overseen by U.S. Soccer? Since I put it out there on Twitter last week, I followed up. The bottom line is that the league and federation deflect the responsibility of her or any player’s ability to compete in the league onto the respective player’s team.

So while Chalupny has not and by all signs will not be cleared for the national team, Chicago’s doctors have deemed her healthy enough to play.

Here’s the statement from the NWSL:

The National Women’s Soccer League is a separate entity from U.S. Soccer and the decision on whether a player is medically cleared to participate in the league is made by the individual clubs’ medical staff. In this situation, the Chicago Red Stars’ medical staff has cleared Lori Chalupny to play in the league.”

So, there’s that, if anyone else was wondering.