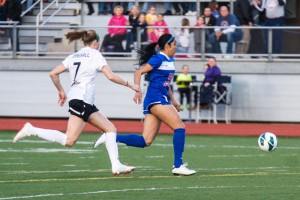 Renae Cuellar (right) scored her third goal of the season for FC Kansas City in a 1-0 win over Seattle. (Photo Copyright Thad Bell for www.womens.soccerly.com | http://www.tpbphoto.com/)

Why Becky Sauerbrunn—the FC Kansas City captain and defensive anchor—had pushed all the way into Seattle’s box was a mystery. Clearly she saw an advantageous situation for her team.

Sauerbrunn overlapped her midfielders and did her best impression of a top-class forward in the 69th minute, playing a low cross toward Renae Cuellar, who tapped the ball in to give Kansas City a 1-0 win over Seattle Reign FC, their second victory in seven over the Pacific Northwest club.

The goal was Cuellar’s third of the season. She has scored once in each game, including last week’s 2-0 win over Reign FC in Overland Park, Kan. The Mexican international’s goal came just four minutes after she put a chance over the bar from 10 yards out.

Cuellar was also involved in the Blues’ best chance of the first half, when Seattle were left scrambling in front of net. A big switch to the right side found Sinead Farrelly—also a goal scorer last week—but her shot from 12 yards was saved by Seattle goalkeeper Michelle Betos. The rebound fell to Cuellar, who looked like she had a tap-in, but Seattle defender Emily Zurrer cleared the ball of the line.

Seattle struggled to create many opportunities in their home debut in front of 2,618 fans at Starfire Stadium in Tukwila, Wash.