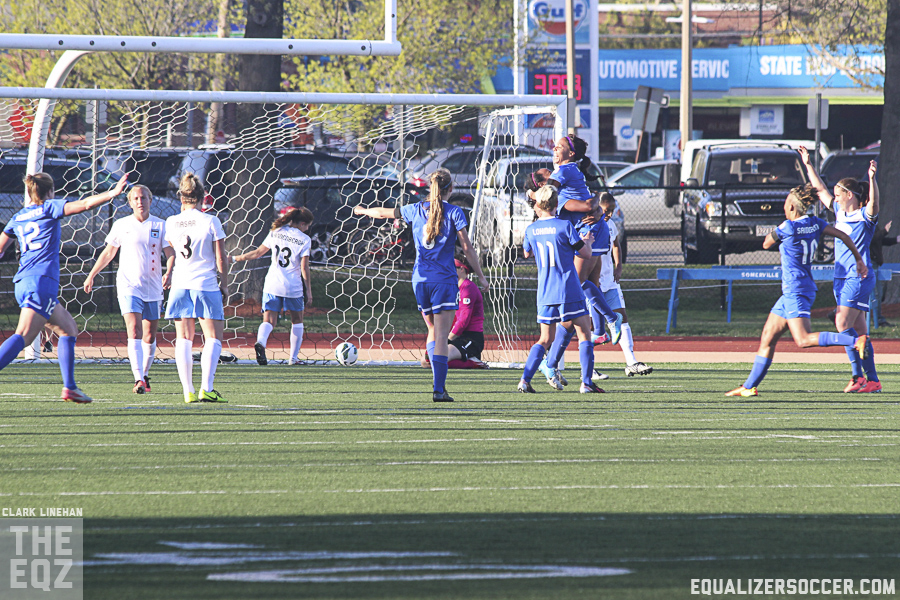 SOMERVILLE, Mass. — The Boston Breakers scored twice in the first half and Sydney Leroux scored a hat trick in a 4-1 victory over the Chicago Red Stars at Dilboy Stadium in front of a sellout crowd of 3,113 fans.

It took twenty minutes for the Breakers to find the back of the net. Lianne Sanderson found Katie Schoepfer on a streaking run, who closed in on Erin McLeod and put it past McLeod’s right side. This was Schoepfer’s first goal for the Breakers this season.

After the game, Schoepfer was quick to point to the effort of the team on her goal, but did note, “I don’t think there’s anything like scoring in front of your home fans.”

Six minutes later, Leroux scored off a Heather O’Reilly corner kick, heading it past McLeod who seemed to have it in her hands before it it slipped through and across the line.

In the 61st minute, Zakiya Bywaters found herself alone in space and halved the Breakers lead to one when she rocketed one past Breakers keeper Ashley Phillips. Lori Chalupny had the assist on the goal, and was one of the few bright spots for an otherwise lackluster Chicago offense.

Barely 30 seconds after Bywaters’ goal, the Breakers pushed back on offense. Sydney Leroux put a header on goal, and McLeod had to fully stretch to keep the game at 2-1.

Leroux scored in the 74th minute as she was able to slip past Chicago’s Carmelina Moscato, who appeared to stumble on the play. With no defenders remotely in range, Leroux still put on speed and easily beat McLeod to give the Breakers the 3-1 lead. Leroux finished off Chicago with a third goal 10 minutes later off a Kyah Simon assist.

Chicago struggled to keep possession, and was unable to find much of any offensive pressure, with Bywaters’ lone strike coming against the run of play. Notably, one of Chicago’s four shots in the second half came from Leslie Osborne on a set piece. Otherwise, Osborne played deeply with Chicago’s defense in her return to Boston to play against the team she captained last year.

Erin McLeod struggled at moments in tonight’s game, but did end the night with six credited saves. While the first half wasn’t kind to McLeod (she struggled to hold the ball on multiple occasions), the score line doesn’t quite reflect the game she truly had. Her saves on Mariah Nogueria’s point-blank header in the 54th minute and Leroux’s attempt in the 61st minute were both brilliant displays of athleticism.

Chicago head coach Rory Dames isn’t hitting the panic button yet, though, despite Chicago having yet to pick up a win.

“Many of the goals we’re giving up are the direct result of mistakes we make, but as we continue to grow and get players experience at this level those mistakes will correct themselves,” he said.

As for the endlessly rotating Breakers defense, this time it was Rhian Wilkinson’s turn to sit out the game due to a right hamstring strain. With Jo Dragotta returning as left back, and Julie King filling in on the right for Wilkinson, the backline had its most cohesive game so far.

The game in Boston began with a moment of silence for the victims of the April 15th bombings at the Boston Marathon, as well as Somerville resident and MIT police officer Sean Collier. The team wore “Boston Strong” t-shirts during warm-ups that will be auctioned off for the One Fund on the Breakers website starting Monday, and also sold bracelets with proceeds going to the One Fund.

Sanderson commented on the first home game for the Breakers since the bombings.

“It’s been a little bit of a traumatic couple of weeks, but we all pulled together, we’ve all been with each other,” Sanderson said. “I think, at this point, it was great to have a good crowd out and I think the minute of silence before the game was great, and we all wore t-shirts before the game and wristbands, and things like that. We want to show our support any way we can.”

U.S. Women’s National team head coach Tom Sermanni was in attendance for tonight’s game. U.S. Soccer announced a June 15 friendly between the U.S. and South Korea will be held outside of Boston at Gillette Stadium.

***The Breakers originally credited Mariah Nogueira with the second goal, but later corrected it to Leroux.