USWNT: Coming to a city near you in June? 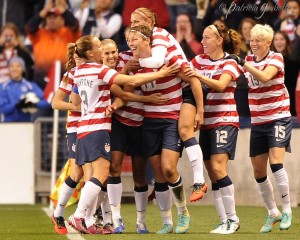 June looks like a busy month for the United States women’s national team. It starts June 2 with “The Rematch,” as it has so plainly been dubbed, when the Americans head to Toronto for a (not-so-)friendly against Canada.

Now the U.S. looks set to play South Korea on June 15 and June 20, according to The Washington Post’s Steven Goff. He says the venues will be announced in the coming days. Where is a mystery, but it seems destined to be on the East Coast given half the National Women’s Soccer League is based in the Northeast and these games fall smack in the middle of the season.

Six league games in total will be affected by these U.S. friendlies, including Seattle’s return to Portland. June 15-20 is a designated international friendlies window.

The Flash may take the hardest hit — they are the only team to play twice in that time frame and will presumably be without Abby Wambach and Carli Lloyd, who will be reevaluated on May 7 and could soon thereafter make her debut with Western New York.

The June 22 Portland at Sky Blue FC game could also be affected, but if these games are played on the East Coast, there will be little jet lag or travel issues for players. Seattle plays at Western New York the next day and Kansas City hosts Washington, neither of which would be awful trips from an East Coast venue for the U.S. women.

Now, all that said, there’s nothing beyond logic that tells us these two games will be on the East Coast. Given South Korea’s travel path, that would add another five hours or so to their extensive time on a plane, so the visitors requesting a West Coast venue wouldn’t be unthinkable. Keep your eyes and ears out for an official announcement.