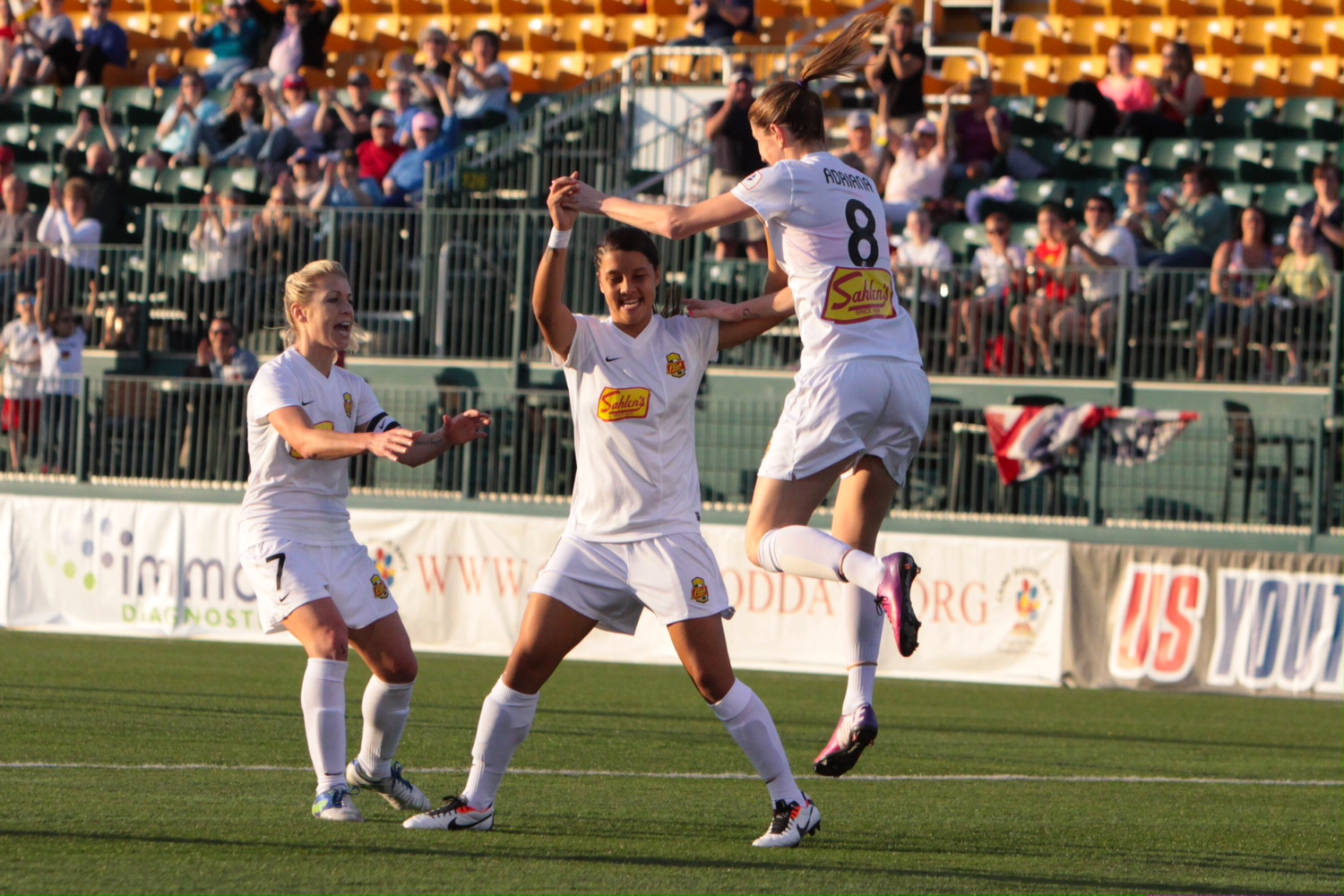 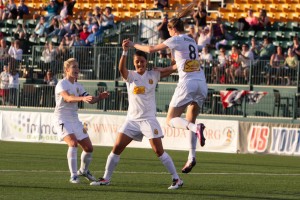 ROCHESTER, N.Y. — Goals by Adriana and Abby Wambach helped the Western New York Flash to their first victory in NWSL, 2-1 over Sky Blue FC at Sahlen’s Stadium in front of 2,127 fans on Wednesday night.

The Flash came out ready and eager for the win. The team looked well composed and in sync tonight, a noticeable difference compared to the last few games, especially in the midfield. They dominated possession the first half, causing trouble for the Sky Blue defense. Samantha Kerr played a phenomenal game, delivering many dangerous opportunities along the flank.

Kerr and Adriana connected in the 6th minute of play after Kerr crossed the ball to an oncoming Adriana who blasted the ball into the back of the net. “I got behind the defender, cut in and I [had] seen Adriana making the run across and just kind of passed it to her and she finished it, thankfully,” said Kerr on her assist.

Wambach, the hometown hero, made her home debut and scored the second goal in the 20th minute after Kerr planted a ball in the Sky Blue box. However, Kerr was not credited with the assist because the ball was deflected off of Christie Rampone’s foot before Wambach finished with the goal.

Sky Blue retaliated with a goal in the 44th minute of play when Kelley O’Hara slipped a pass to Sophie Schmidt and blasted a shot into the back of the net past a poorly positioned Adrianna Franch.

At the top of the second half both teams came out aggressively, battling for possession. Sky Blue was more composed in the second half, but the momentum from the Flash was hard to beat.

Speedy forward Lisa De Vanna just missed the equalizer for Sky Blue in the 67th minute when her shot blasted just wide of the right post. De Vanna must be tired of seeing Franch in front of her. On opening night, Franch made two close-range saves on De Vanna. Wednesday made three times in two matches stoning De Vanna in front of goal.

There was another close call in the 88th minute when Wambach spotted Sky Blue goalkeeper Brittany Cameron off of her line and drilled a shot over her head, landing just to the right of the post.

“We came out hungry. We came out aggressive,” said head coach Aaron Lines when asked about his teams’ performance tonight. “I thought the attitude and mindset was massive throughout the whole team today. The cohesion was better than what it has been, it needs work still, but I’m very happy with the way we created opportunities tonight.”

After a tough start to the season, the Flash rallied together and fought hard for their first win.

“We knew we had to work hard and that’s what we did today,” said Kerr. “We’re playing well together as a team and to get that win is so important for confidence.”

Wambach was happy to report she didn’t have any effects after being struck in the head during a game against the Washington Spirit. She praised her doctor and all those involved. “I feel so thankful that I am playing for the Western New York Flash and our doctor, who did a fellowship here with a neuropsychologist, is one of the best in the entire country,” said Wambach.

The View from the North: Time to bring back the women’s Voyageurs Cup
USWNT: Coming to a city near you in June?