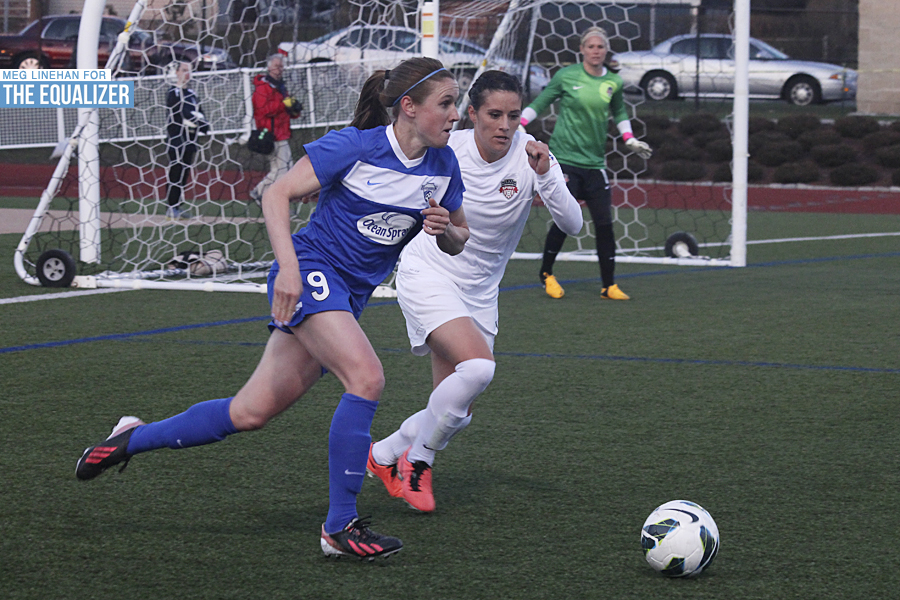 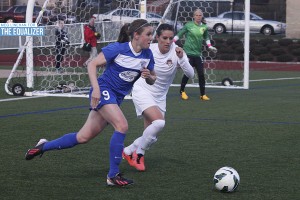 Heather O'Reilly of the Boston Breakers scored twice in a 2-1 win over the Flash. (Photo copyright Meg Linehan for The Equalizer.)

ROCHESTER, N.Y. — Heather O’Reilly scored twice Saturday at Sahlen’s Stadium, in front of a crowd of 4,065 to lift the Boston Breakers to a 2-1 win over the Western New York Flash, now winless through three games

O’Reilly scored the game-winner in the 83rd minute when her left-footed shot nutmegged Flash goalkeeper Adrianna Franch. Lianne Sanderson played a through ball to O’Reilly who made a diagonal run, cutting in from the right side.

When asked about her game-winning goal, O’Reilly said, “Franch is a fantastic young goal keeper, I consider myself lucky to be able to get that second goal on her. I turned the corner, got a good ball from Lianne, and just basically tried to get frame and luckily it went through her legs.”

A confident start for the Breakers was negated seven minutes into the match when Australian Samantha Kerr scored to put the Flash ahead 1-0. Laura Heyboer played Kerr in for the shot, which went right over 18-year-old goalkeeper Cecilia Santiago.

But O’Reilly leveled the score in the 15th minute with a simple tap-in at the far post off a Sydney Leroux low cross. Boston continued to pressure throughout the opening half, and though many dangerous opportunities were created, they couldn’t find the go-ahead goal before the break. O’Reilly continued to link up with midfielder Sanderson through the right wing, giving Flash defender Katherine Reynolds trouble.

Western New York almost found the go-ahead goal against the run of play when Kerr got around Boston defender Cat Whitehill, but Kerr’s shot was right at Santiago. In an attempt to shore up the midfield, Western New York’s coach Aaron Lines made an early substitution in the 33rd minute by bringing in Angela Salem, but the change did not lead to a goal.

As the second half commenced, both teams came out aggressively battling for their next goal. Whitehill received a yellow card in the 62nd minute after taking down Adriana, who was about to break clear for the goal. Boston continued to pressure the Flash before O’Reilly eventually struck the game-winner.

With the loss behind them, the Flash move forward and prepare for their game on Wednesday against Sky Blue FC at Sahlen’s Stadium.

“I’m zero percent worried,” said Flash captain McCall Zerboni, when asked about adversity. “I believe 100 percent in this team with what we’re going to do and our abilities.”

Likewise, Lines is now focused on preparing for Wednesday’s game.

“I said to the group I believe in the quality that we have and we need to think positive,” he said. “We need to come back in Monday morning, look forward to work, roll the sleeves up, pull together, and get it back.

At half time Abby Wambach announced that she is going to be ready to play on Wednesday’s game after being sidelined for precautionary reasons thanks to a ball that hit her in the face during a game last weekend in Washington.

Lines confirmed that after the game, though he added that Wambach is not officially cleared yet. Carli Lloyd, who is yet to play this season due to a shoulder injury, will be reevaluated on May 7.