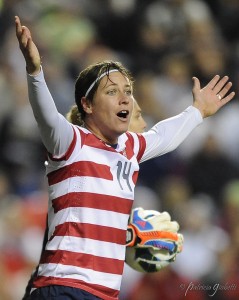 Yet again, the much-anticipated homecoming will have to wait.

The team and league still have not used the word “concussion” or even mentioned concussion symptoms, which now seems like we are all just dancing around the elephant in the room.

Similarly to 2011, Wambach, who grew up in Rochester suburb Pittsford and is an A-list celebrity in the region, will not play in this homecoming match of sorts for her. In 2011 she played for magicJack, which the Flash hosted three days after the US women lost the World Cup final to Japan. An over capacity crowd of 15,404 turned out Sahlen’s Stadium hoping to see Wambach play, but the quick turnaround, trans-Atlantic travel and ailing Achilles prevented that.

This time, it’s a head injury that will keep her out of the home opener for the Flash, what would have been her first-ever game at Sahlen’s on the home club team (the US women stop there every so often) — even though the crowd has always been pro-Abby, regardless of which jersey she is wearing.

Here’s the video of the incident from last week, in which Wambach goes down in a heap after taking a ball off the head from teammate Brittany Taylor:

After the match, Flash coach Aaran Lines said Wambach was “not doing too well.”

On Monday, Wambach underwent concussion testing on Monday and felt like she was on track to play on Saturday, likely a balance between her competitiveness and a pressure really unlike any I’ve seen in soccer to play for and please a hometown crowd with such affinity for its homegrown star.

NWSL executive director Cheryl Bailey told Slate‘s Stefan Fatsis of last Saturday’s incident, “everybody who was out there handled that appropriately.” And as Fatsis very succinctly explores in that article, the truth or fact in that statement is harder to find as more details are revealed.

And by the looks of it, Wambach is still practicing (this photo was tweeted out on Thursday afternoon).

The View from the North: Pro WoSo in Canada?
Some answers on NWSL’s rosters, rules, and regulations