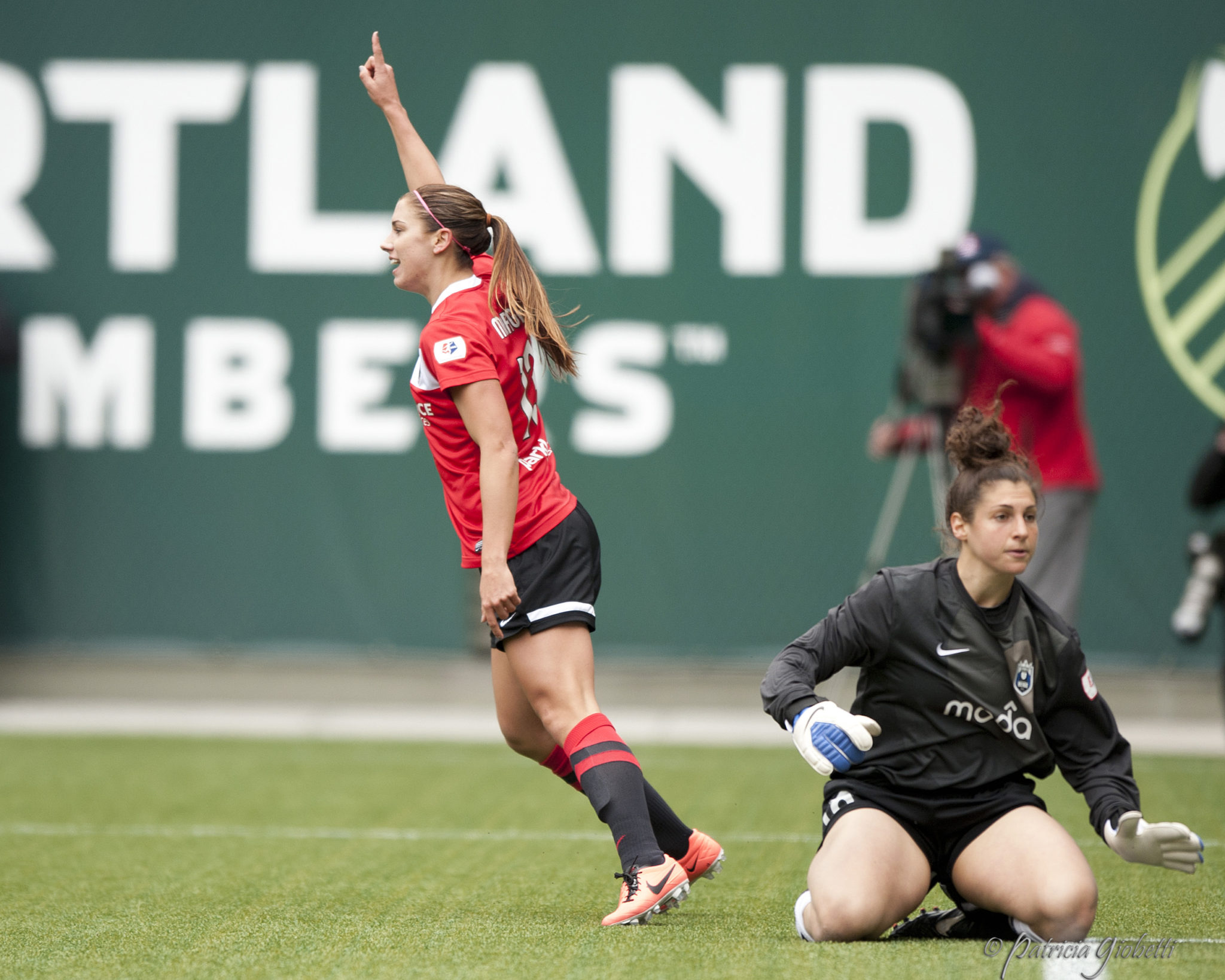 PORTLAND, Ore. – Bouncing back from their opening day draw in Kansas City, Thorns FC saw goals from Marian Dougherty and Alex Morgan lift the team to a 2-1 result against Seattle Reign FC, giving Portland Thorns FC a victory in the NWSL’s first edition of a Cascadia Derby.

A crowd of 16,479 attended the rivalry’s birth, with the game between Pacific Northwest neighbors due to out-draw seven of the nine Major League Soccer games played this weekend. Beyond setting a new league record, Saturday’s crowd at JELD-WEN Field eclipsed any single-game attendance from Women’s Professional Soccer.

“The reception I have received and this team has received from Portland has just been unbelievable,” head coach Cindy Parlow Cone said after her team’s first victory. “[The fans] were the 12th person on the field. It’s hard for a team to play against 12 people.”

“I was walking around the field (with Rachel Buehler) and she was like ‘this is like the World Cup,'” Parlow Cone explained. “It was an unbelievable atmosphere.” 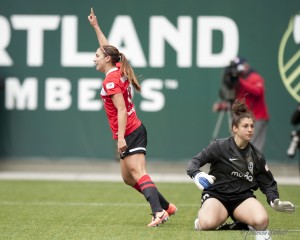 That standout crowd witnessed a match the Thorns controlled throughout, even if their initial possession looked like the stoic play that led to last week’s draw in Overland Park, Kan.

Midway through the first half, the Thorns started to create chances on goal, with a 29th minute corner from Nikki Washington drawing a diving catch from Seattle keeper Michelle Betos, keeping a Becky Edwards’ header from opening the scoring.

Seven minutes later, a ball over the defense from Christine Sinclair led to a chance for Morgan in the left of the area. A rifled shot off Morgan’s left foot drew a save off the line from Kate Dienes.

It was another set piece in first half stoppage time that finally allowed Portland to get on the scoresheet. Off a restart along the right side 35 yards from goal, Washington’s short ball near post allowed Doughtery to flick the ball past Betos, who was frozen on her line anticipating a touch from the oncoming Morgan.

“It was huge [goal],” Sinclair confessed after the match. “Especially to get into halftime with that lead. We played pretty well in the first half, and I thought we deserved a goal. To get it so late was a nice way to end the half.”

Thorns FC increased their dominance at the onset of the second half, pushing Seattle deep into their own area from shortly after the game resumed. The pressure almost allowed Washington to double Portland’s lead in the 48th minute, with an opportunity from the spot set up by Sinclair blocked out for a corner.

Four minutes later, Morgan did what Washington could not. After a Seattle turnover allowed Sinclair to carry the ball into the right of the penalty area, the Thorns’ ‘number nine’ was left with an open shot as her teammate played a ball back across the area. With enough time to take a touch to set up her right-footed shot, Morgan went far post for her first NWSL goal.

“She has great vision and awareness of her teammates,” Morgan said of Sinclair, who put in a Woman of the Match performance from attacking midfield. “She just played a through ball. I knew if I placed it far post, I’d beat the keeper.”

Seattle were able to pull a goal back in the 74th minute through Jessica Fishlock when a collision between Keelin Winters and Rachel Buehler at the edge of the penalty area allowed a ball to drop for the Welsh international. Her finish inside Karina Leblanc’s right post was Seattle’s only good chance of the day, one that still left Seattle one goal short.

With the win, Portland climbs to first place in the NWSL, their four points leaving them one clear of Sky Blue FC, which did not play this weekend. Seattle stays in a five-way tie for fourth with the one point they earned last Sunday in Chicago.