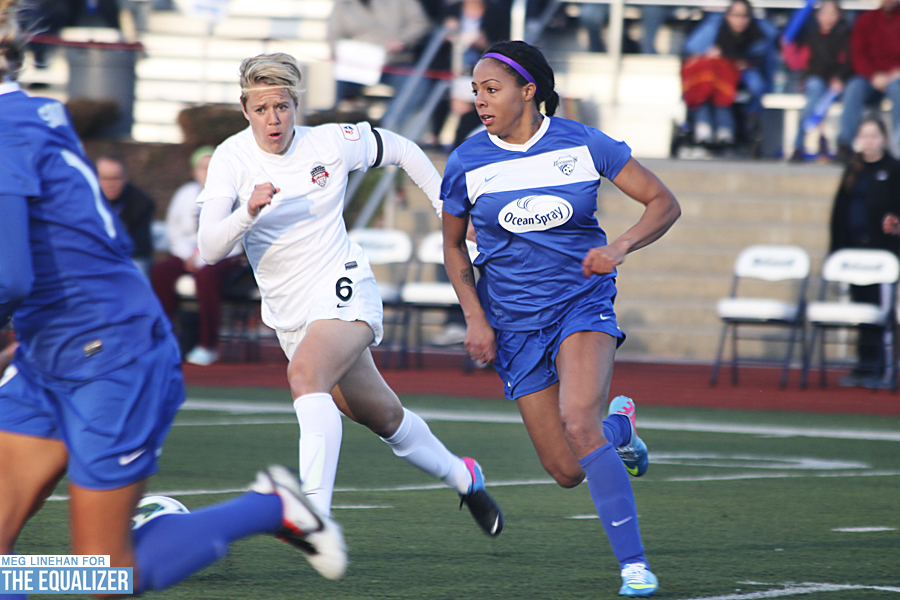 SOMERVILLE, Mass. – The Washington Spirit’s efforts to spoil the Boston Breakers’ home opener on Sunday night in front of the sellout crowd of 2,634 at Dilboy Stadium nearly paid off, had there not been stoppage time. Washington settled for a 1-1 draw after blowing a lead in stoppage time.

Boston dominated possession early but the Spirit got on the scoreboard first on a counterattack in the 15th minute, with Stephanie Ochs managing a cross to Tiffany McCarty who headed in the goal.

The Breakers continued to have chances but were unable to finish between Washington’s great defense and Ashlyn Harris’ work in goal. In the 91st minute, seconds from the final whistle, Libby Guess found Sydney Leroux streaking down the left side for the late equalizer.

“I felt like we had a lot of the run of play, and they were exceptionally good on the counterattack,” Breakers defender Cat Whitehill said after the game. “That’s where they got us on their goal. One of our goals this season is we want to remain undefeated at home and so we just barely scraped by. So we’re very proud of that.”

While Boston controlled possession for most of the game, Washington’s defense made it very difficult for them to string together attacks.

“I thought that we were playing well,” said Whitehill. “But we just weren’t getting that one shot or getting enough separation to get that shot. It was getting so close, we had so many opportunities. Ashlyn (Harris, Spirit goalkeeper) played a great game and their defense played great. I’m just glad we got the result. They were just a frustrating defense. They had a great game plan, they were excellent in the transition. They were smart, they played smart.”

“We were battling,” said Breakers Head Coach Lisa Cole. “And they got tighter in their defense, so it makes it harder to score. But, we definitely had some good opportunities, and some things to work on. We play longer together and it will get cleaned up a little bit.”

The Spirit defended well throughout the match and Ochs created second half chances that could have double Washington’s lead. Ochs forced a big save out of Breakers goalkeeper Ashley Phillips in the 59th minute and four minutes later found McCarty with a cross,  but McCarty’s shot deflected off the post.

Boston then pounced on the open door in stoppage time.

“Long ball by Cat,” Leroux started, explaining her goal. “I made a run outside, Libby played me through, and left foot, side netting. We needed that, we needed to come out with a point at home.”

Washington’s defense held strong throughout the match, taking some pressure off a young group of attackers.

On the other side, Boston will need to continue work on improving their backline, as well as finishing more of their chances. The Breakers have a lot of talent up top but will need to be better at taking advantage of their opportunities.

On a cold night in Somerville, a few notable attendees of the match included Kristine Lilly, Tony DiCicco, and Celtics forward Jeff Green (who even tweeted about the game).

“Awesome,” Cole said of the atmosphere in Dilboy. “As always, awesome. It’s cold, people could have stayed home with the live stream, and they chose to come out and cheer us on. We appreciate that.

“The crowd was amazing,” Leroux said. “I’m happy that we made it exciting. Hopefully we don’t make it that exciting next time!”