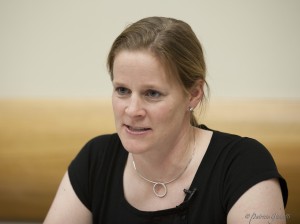 Gameday is finally here. It’s not as if this were the longest wait. The year without professional women’s soccer — which, hopefully 2012 stands as the last such — didn’t quite feel that way with a spectacular London Olympics to distract us.

But the National Women’s Soccer League restores a top flight for women in North America, and it’s time to play ball. Before doing so, though, we all need to make irrational decisions on the best and worst teams in the league, based on preseason and what we know of the players and coaches.

In an hour-long preview show on This Week in Women’s Soccer on NASN.tv, we did that with a whole host of pundits. Joined by fellow Equalizer staffers Richard Farley (also of NBC), Dan Lauletta and Meg Linehan, as well as AllWhiteKit.com’s Chris Henderson and SportsMyriad.com’s Beau Dure, we break down what will happen this season.

Here is the link to the podcast, with comprehensive team-by-team analysis and predictions (please excuse the echo…it goes away after a bit).

In addition to their picks, we’ve added in the predictions of our Washington Spirit beat writer Jennifer Gordon and FC Kansas City beat writer and photographer Thad Bell and taken the everyone’s selections and assigned eight points for a first place vote and one point for a last place to represent the overall picture of how teams will finish.

As I always like to say, this is the time of year when we all get to make wild assumptions, be wrong, and motivate a lot of players and coaches who will be angry with our picks. That said, here’s how it all shakes out:

Jeff Kassouf — POR, FCKC, WNY, SBFC, BOS, CHI, SEA, WASH. On Portland finishing 1st: “We’ve seen this script before, and while there may be potential depth issues in the back, there’s no defense in this league or in the world that can handle Alex Morgan and Christine Sinclair together. This has 2010 FC Gold Pride and 2011 WNY Flash written all over it, but perhaps a little less dominant.”

Richard Farley — POR, FCKC, BOS, SEA, CHI, SBFC, WNY, WASH. On WNY Flash finishing 7th: “I’m not sure Abby Wambach, her physical state, will be able to hold up through an entire seas0n of NWSL commitments, plus US Soccer commitments. We saw it in the past in WPS…that plus what I would call a short allocation for Western New York.”

Dan Lauletta — FCKC, POR, WNY, SBFC, CHI, BOS, SEA, WASH1.  On FC Kansas City finishing 1st: “The most balanced roster in the league is also the group least affected by injuries, absences, and other travails that go with putting a team together from scratch.  They got lucky on draft day when the two teams drafting ahead of them bypassed Kristie Mewis who has since been capped by the national team and has been tabbed as a budding star. X-Factor:  Casey Loyd”

Meg Linehan — POR, FCKC, CHI, WNY, SBFC, BOS, SEA, WASH. On Chicago finishing 3rd: “I just have a feeling about them. They were very gritty last season in the WPSL Elite; they have a lot of the core of the same players.”

Chris Henderson — WNY, FCKC, POR, CHI, SBFC, BOS, SEA, WASH. On WNY winning it all: “They’re going to do it again. They’re going to win their fourth straight title. They have one of the best striking combos…I think they’ve got the best coach in Aaran lines and mark it down right here, I think they have the best goalkeeper in the league in Adrianna Franch. She is the truth.”

Beau Dure — POR, FCKC, WNY, WASH, SBFC, BOS, SEA, CHI. On the Red Stars finishing last: “Their players are almost as old as I am.” (Beau didn’t share his age with us)

Thad Bell — FCKC, POR, WNY, SBFC, CHI, SEA, BOS, WASH. On Kansas City’s roster: “A well balanced team with loads of talent spread over the entire team, not concentrated in a couple stars. Should help them last through call ups, injuries and the heat of the summer. Might have my homer glasses on but they have looked strong in preseason. Expect Renae Cuellar to surprise a couple teams and then draw a lot of fouls the rest of the year.”

Jennifer Gordon — WNY, FCKC, POR, SBFC, CHI, BOS, WASH, SEA. On why Seattle will finish last: “I picked Seattle to finish last due to the fact they have to play Kansas City and Portland more than the Spirit and Boston do.”