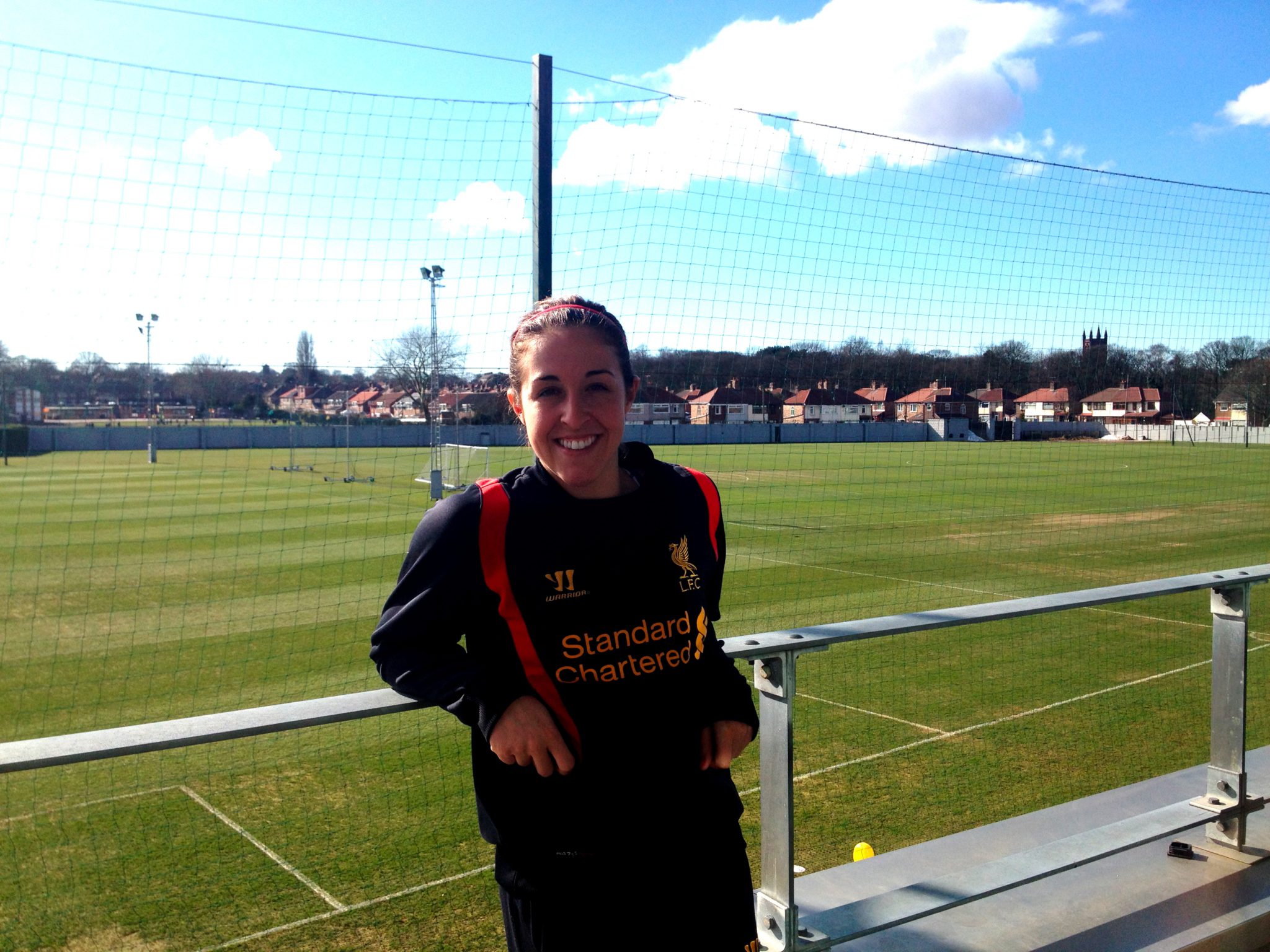 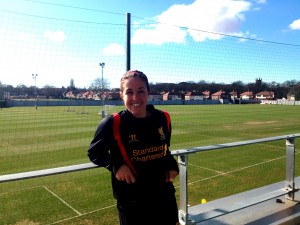 Amanda DaCosta is settling into life in England with Liverpool Ladies FC.

Do you remember when you were younger, and you would spin around really fast for 10 seconds, or however long you could handle, and then stop–but you could still feel the entire world spinning around you even though you were standing still? It didn’t feel bad. You actually kind of liked the feeling…it made you smile for some reason even though you couldn’t understand what was going on around you. When the sky finally stopped spinning, something inside of you wanted to try and do it again, almost as though you didn’t want the strange feeling of adventure to subside just yet…

Well this has been my life: I have been spinning ever since I got to Liverpool. It has been over a month since my last blog post about my arrival to this wonderful new place, and I apologize for that, but it is hard to type when you are spinning so fast!

In the midst of my spiraling, I sit here trying to find a way to talk about everything that I have been doing for the past few months. Part of me wants to just tell you that I have been sitting in various coffee shops talking about the broadest subject matter you could think of with my teammates, but I suppose I could pick out some more exciting things that have been going on with me aside from caffeine addictions and over-eating.

Before I get going, I need to get out there how I really feel about being here:

One of the coolest things about playing for Liverpool is that I am playing for Liverpool. Simple enough, right? Playing for a club with such an amazing history and international fan base is an experience that any footballer would dream of. Being surrounded with the professionalism of the club is something that I have tried to absorb since I’ve gotten here, and the club continues to surprise me and exceed my expectations every single day. The recent integration of the men and women’s sides of Liverpool F.C. have hit headlines all over the UK, as the pairing is not common for clubs in England (or even the world for that matter). Finally being viewed as an athlete in this club, and losing the title of ‘male’ or ‘female’, is a tremendous step forward for the game, and it is evidence of the positive direction women’s football is heading in. 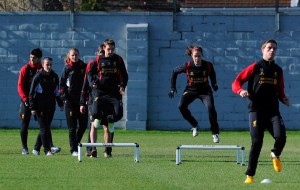 My teammates and I were given a once in a lifetime opportunity to train with the men’s team at the historic Melwood Training Grounds.

My report on the entire day can be found on our website but luckily for you readers, I can give you a slightly different, and a bit more personal, perspective.

Getting to train with players such as Steven Gerrard, Luis Suarez, Jose Enrique, and a list that could go on for ages, is almost like getting to play catch with Derek Jeter: it just doesn’t usually get to happen, and when it does, you really need a day or two to realize what you just did. On the day, playing small sided games with professionals of this caliber just seemed like another day on the job, and of course my no-filter New York self didn’t even think twice when it came to dishing back some banter to Suarez at the time. Only when I was home and unwinding from the day’s festivities did it hit me that my teammates and I were not only playing on the same pitch as these guys, but we did well! We held our own and earned the respect from our male counterparts, which as females is always something to be proud of.

The men opened up their home to us at Melwood, and welcomed us into their family with open arms. We spoke about football during a post-training lunch and about our lives in general. They were just perfectly normal people, but with maybe a few screws loose as footballers do, and were gracious hosts to us. It was certainly a day that will be difficult to forget, and difficult to top. As a football junkie, I was fully aware of every single detail that day; starting from the way the men carried themselves in the boot room before training, all the way to how they conducted their warm-up and so on. The differences between our squad and theirs were visibly noticeable, but the similarities were as well which is something to take pride in. Having not been a Liverpool fan before I came here, I now most certainly understand the meaning behind the phrase “You’ll Never Walk Alone”.

An official welcome was in order! Not to Liverpool the city, but to Liverpool the Club. As I had mentioned earlier, LFC had recently brought the Ladies in as official staff members of the club. Along with this transition, we went through the standard procedures that every Liverpool FC employee must go through–including a tour! Well, first we had a very long presentation…and then a tour. I don’t mean to knock down the presentation by any means, it just wouldn’t be very interesting for me to delve into all of that information, and I don’t even think I’m allowed to anyway so I will spare the details. It was, however, very informative, and it was interesting for me to see all of the components of what makes a business as big as LFC run smoothly.

Nerdy stuff…but the tour of Anfield was something that I had really been looking forward to since I moved to Liverpool. Hearing about all of the history in every nook and cranny of the stadium really puts things in perspective of how far the club has gone from the beginning. Taking the same steps that so many accomplished footballers had taken was inspiring, and it gives me hope for the future of the women’s game. Every club had to start somewhere, and it is remarkable how the same stadium could stand in place for so long and change very minimally. To be honest, the stadium wasn’t as glamorous as you would think: and that is why I loved it. It was raw, no bells and whistles to set it off or anything—just a professional atmosphere where players knew upon arrival that they had a job to do. The tour came at a perfect time for our team as we would start our final preparations of the historical derby match between Liverpool and Everton the following Saturday. Feeling welcomed into the club and exuding a confidence that would move us into the weekend, we were as ready as ever for the highly anticipated derby clash that would be aired live on ESPN. 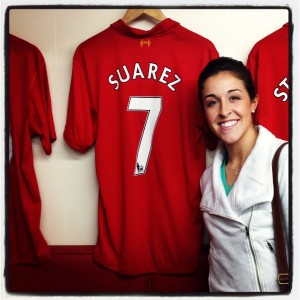 Amanda DaCosta poses next to the jersey of Liverpool men's striker Luis Suarez.

Waking up on March 23rd was like waking up in a dream surrounded by white puffy clouds…only seriously, I woke up on match day to blankets of snow conquering my street, and snow flakes the size of softballs hitting my window. Not the image you want to see when you wake up when you know you have a game later on that day. I waited anxiously all day for confirmation that our match would still in fact be played, and thanks to the ground staff at our home stadium (Halton Stadium), our all-weather turf was being looked after and plowed frequently to assure our game would still be on.

Fans packed the stadium in to watch the historical derby clash that evening vs. Everton, despite near-freezing temperatures, roaring winds, and snow that would continue to fall for the duration of the game—not my favorite weather conditions to play in but I suppose it is all part of the job description. The buzz in the locker room was filled with an intense wintery mix of nervousness, excitement, anxiousness, and playfulness, all bundled into one. It was our first competitive game as a new team, and we were all eager to get on the pitch for a match we knew would be 90 minute battle. The game went as we expected it to go, both teams had to fight hard and the possession flip-flopped between the blue and red jerseys. You could feel the tension in the stands as it carried over onto the pitch: an environment that made for an entertaining football match. The match would end in a 1-1 draw after we gave up the lead late in the game. We left the stadium that night unhappy with the result, but also excited to build off of what we had started for ourselves as a group.

I am enjoying this new city more and more each day. Not only has my passion for football brought me to Liverpool, where I have encountered new friends whom I couldn’t imagine never meeting, but I have been given more opportunities to write which is another thing that I love (if you haven’t noticed). Going through all of the dips and turns life has thrown at me always seems so unsettling at the time, but it all makes so much sense now that I look back and see how everything lead me to where I am now: in a booth at a coffee shop somewhere in Liverpool…

I’m still spinning around like I did when I was 4 years old, and I don’t feel like stopping just yet.

The View from the North: Is the women’s game healthy in Canada?
Ashleigh Gunning Blog: New season begins