Defense will make or break Boston in 2013 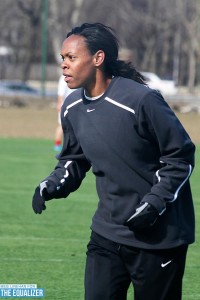 Kia McNeill and the rest of the Breakers' defense will make or break Boston this season. (Photo copyright Meg Linehan for www.womens.soccerly.com)

With the roster finalized, the Boston Breakers have put together a dangerous offense with speed and depth.  The team still has plenty of questions to resolve about the back four’s capability to withstand counterattacks as well as an overall weakness defending against set pieces.  Still, the biggest question remaining with six days until kickoff in Somerville, Mass., is: Who will be tapped as the starting goalkeeper?

After starting most of the preseason matches, including the only NWSL vs. NWSL scrimmage against Sky Blue FC, Colleen Boyd has been passed over in favor of last-minute signing Ashley Phillips, who played for the Breakers in 2010, with a 1-4-4 record (1.15 GAA).  While the record isn’t deeply encouraging, the pro experience is.  The Breakers will need to play catch-up this week to develop a relationship between Phillips, allocated keeper Cecilia Santiago, and the backline, who spent most of the preseason adjusting to covering Boyd, Adelaide Gay (now with Portland), and Vikki Alonzo.

Knowing coach Lisa Cole’s concerns about rookie goalkeeper mistakes, chances are Phillips will be the starting keeper. Phillips also has a couple of inches on Santiago, and it’s not entirely clear yet if there could be a language barrier for Santiago to overcome early in Boston.

Boston will start their season against the Washington Spirit, and will face the Spirit a total of three times in their first six matches. The schedule, based on preseason struggles of Washington, is a bit of a gift considering Boston’s need to settle their defense and fully integrate their national team allocations, especially Canadian Rhian Wilkinson.

Star Watch: The Breakers have plenty of big names on their roster, but Sydney Leroux, Kyah Simon, and Heather O’Reilly will have it relatively easy on the attacking side for Boston.  This is a team built for offense.  Cat Whitehill will be the player to watch for Boston.  She’ll need to use every iota of experience and smarts to lead a shaky back line against the likes of Alex Morgan and Christine Sinclair.  If she’s successful, look for the Breakers to make it to the postseason.

Potential Breakout Player: The Breakers will need regular goal production from Leroux and Simon if they hope to see themselves in the top half of the standings, but if Lisa-Marie Woods ends up in Cole’s starting eleven, she could provide a spark to create plenty of chances of her own.  She’s a tiny 5-foot-1-inch, but has a deft touch with the ball at her feet and a rocket of a shot.  She was a huge piece to the W-League’s Ottawa Fury’s 2012 championship squad, and definitely has the potential to make a name for herself in the NWSL.

Coaching Factor: This will be Lisa Cole’s first year as a head coach in a professional women’s soccer league, but she’s not lacking in experience.  Her background as a goalkeeper coach could speed up Santiago’s development as a fully-rounded starter, especially considering Santiago’s raw skills at her age.  Cole’s also brought in much of the successful 2012 WPSL Elite squad, which will provide plenty of familiar faces to ease the transition for draft picks and free agents.

Cole has high expectations for her squad, but hasn’t lost sight of the greater purpose of the NWSL.  Player development will be an important element of practices, and not just for the up-and-comers.  She’s already spoken highly of O’Reilly’s contributions to the team and how that could translate into continued success with the U.S. national team, especially with Tom Sermanni weighing his options ahead of the 2015 Women’s World Cup.

Off the Field: Boston’s sales figures are nothing to scoff at, with roughly 500 season tickets sold, and the ticket sales for the home opener on Sunday hovering around 2,100 tickets sold.  This leaves 400 seats left to fill with less than a week to go until the home opener on April 14 against the Spirit.  To compare to the 2012 figures of the WPSL Elite season, season tickets are doubled, and single game ticket sales are on pace with last year’s at this time.

The additional seating planned to expand capacity at Dilboy Stadium will not be in place for the home opener.  Once the team is able to install the extra seating behind the team benches, the capacity will increase from 2,500 to 3,500.

As for the stadium itself, its shortcomings are well-known: cash only, no alcohol for adult fans, awkward access for those traveling by public transportation, a sunset that can blind fans for half a game.  But for everything that Dilboy lacks, the intimacy and noise level of a sold-out Dilboy easily surpasses the half-empty concrete echoes of Harvard Stadium.

The one thing the team is lacking heading into the start of the season is an organized supporter’s group.  There have been no signs indicating a return for The Riptide.  Dilboy is usually noisy enough without prompting, but synchronized chants and banners would take the atmosphere to another level.

The Breakers have announced their plans to webcast every home game, including play-by-play and sideline reporting.  The cost to stream each game will be $5 per game and will not be geo-blocked as to allow international fans to watch.