Thorns FC defeat U. of Portland 2-1 in preseason 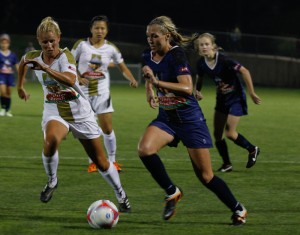 PORTLAND, Ore. — The Portland Thorns may have controlled the 90 minutes Saturday against the University of Portland, but the path to the franchise’s first preseason win wasn’t an entirely smooth one.

A first half goal against the run of play from Pilots forward Amanda Frisbie put the home team up 1-0 at halftime, but second half goals from former Pilot Danielle Foxhoven and midfielder Allie Long eventually gave the Thorns a 2-1 victory.

A capacity crowd of 4,892 at Merlo Field were in attendance for the Thorns’ first public appearance, a game played without the new team’s marquee stars.

Despite their absence, a Thorns team that is expected to have one of the NWSL’s best attacks played to type. Cone’s team out-shot their hosts 23-6 and dictated play from shortly after the opening whistle.

That long spell of control was interrupted in the 30th minute when a long ball from Pilot center half Lorielle McCluskie met Frisbie making a diagonal run behind the Thorns defense. First round draft pick Kathryn Williamson was unable to prevent the Pilot forward from getting a ball off toward goalkeeper Roxanne Barker, who was able to deflect the ball but only delayed it from bouncing in for the opening goal.

Seven minutes into the second half, a speculative shot from just outside the arc from Thorns’ attacker Jessica Shufelt forced Pilot goalkeeper Nichole Downing to spill a rebound near the edge of the six-yard box. The ensuing chaos forced a clearance off the line before Foxhoven slotted home the equalizer from the left of goal.

In the 73rd minute, McCluskie blocked a shot from Thorns midfielder Nikki Washington, but Long was able to get to the resulting ball and Downing was beaten for the game-winning goal.

The Pilots nearly equalized in the 89th minute when a misread from Thorns’ Brazilian goalkeeping trialist Aline Reis left Micaela Capelle with an open goal. From left of goal, the attacker’s shot went just wide of the near post for the Pilots’ final chance before full time.

Red Stars, Flash, Blues all win in preseason
Five things we know about the Portland Thorns