Five things we know about the Portland Thorns 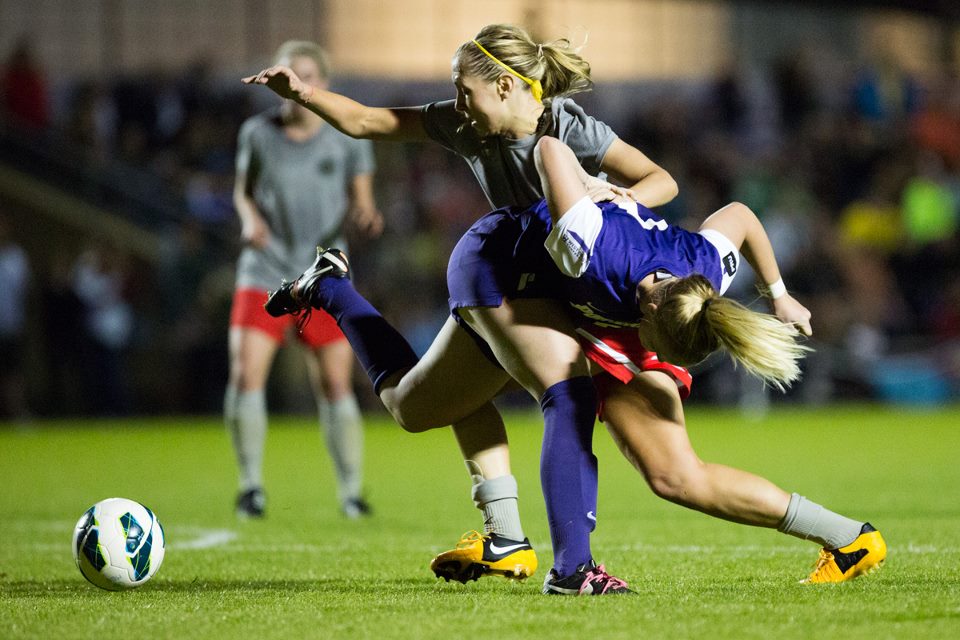 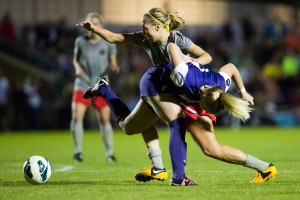 Allie Long (back) battles for the ball vs. the Portland Pilots. (Photo courtesy David Blair/Portland Timbers)

PORTLAND, Ore. – The Thorns have already become known for their superstar talent, but on Saturday night, with those stars away on international duty, Portland used their only scheduled preseason game to tell secrets – information those around training have known since camp came together mid-March:

Even without the likes of Alex Morgan and Christine Sinclair, Portland looks like a solid team, a state that may prove disappointing to opponents hoping the Thorns would be a top-loaded side with as many weaknesses as strengths.

That doesn’t appear to be the case, something the University of Portland found that out the hard way. While the final of Saturday’s game was a close 2-1, the Thorns controlled the game from the fifth minute on, eventually putting 14 shots on goal to the Pilots’ three.

In an NWSL preseason of mixed results and varying performance from professionals facing collegiate squads, the hamstrung Thorns impressed. Their performance against the Pilots was the first indication that this team may be more than a overstocked attack.

After their win at Merlo Field, there five things became apparent about Cindy Parlow Cone’s team:

When the Thorns were allocated Christine Sinclair, Alex Morgan and Tobin Heath, prospective opponents could comfort themselves knowing the team needed more than stellar attacking talent to live up to their favorite’s status. If those opponents were at Merlo on Saturday, they would be comforted no more.

Portland’s midfield not only looks set with Becky Edwards playing behind an interchangeable line of (left-to-right) Allie Long, Angie Kerr, and Nikki Washington, the quartet looks strong. A dominant Edwards was easily Saturday’s best player, and come the start of the regular season, it’s easy to see the more advanced midfielders winning most of the second balls she creates in midfield. With Kerr’s skill on the ball providing a link to Sinclair, the Thorns midfield also provides value going forward, particularly with Long and Washington able to play off their more advanced teammates.

It looks like a group that can become more than the sum of its parts, the midfield’s flexibility and industry able to protect a back line that’s expected to be a weakness. And with Tobin Heath and potentially Amber Brooks joining in June, the group could develop into the league’s best.

But what happens when [Sinclair and Morgan] are with their national teams?’ was another comfort opponents could use, and although that issue is not as easily written off as the midfield, Portland do have a surprisingly deep collection to talent up top.

Danielle Foxhoven has been a key addition. Her off the ball movement was great on Saturday, while her first touch brought Kerr into play as defenders targeted her from the back. Either off the bench or in place of Sinclair or Morgan, the former Pilot will prove valuable.

UConn alum Jessica Shufelt helped focus the Thorns attack after coming in at halftime at U.P., while draftee Nicolette Radovic gives Cindy Parlow Cone a player capable of playing in wide areas. Playing off Foxhoven, each allow Cone a different look to try and navigate those spells where she’ll be without her big two.

If a team had to go a whole season with Foxhoven, Shufelt, and Radovic in attack, they would probably have a below-average offense. But those are Portland’s third through fifth attackers – players who give the Thorns a surprising amount of depth.

There’s still a chance Tina Ellertson could join the Thorns, but it’s a long shot. Without the former U.S. international in camp, there’s a spot open next to Rachel Buehler.

First round pick Kathryn Williamson had looked strong in training, but over the course of preseason camp, Stanford trialist Emilee O’Neil started seeing more time alongside Buehler. With the U.S. international gone on Saturday, Portland’s friendly became a de facto battle for a starting spot.

The two couldn’t have had more different nights. Almost any success the Pilots had came at Williamson’s expense, including their only goal. The former Florida defender looked overawed.

O’Neil, on the other hand, looked capable of starting. She was composed, read the game well, was aggressive when needed, and contributed in the air as well as with her feet.

Though she faced more tests against U.P., O’Neil ended up making far fewer mistakes. It’s difficult to imagine Williamson being able to make up the ground needed to win the starting job before April 13 in Kansas City.

4. Cone starting to reveal her setup

The way the Thorns set up on Saturday will in all likelihood be replicated against FC Kansas City in the opener on April 13. The team’s personnel seem to have been acquired with this setup in mind, and with Alex Morgan and Christine Sinclair focal points of the team, you know the Thorns are likely to play a 4-4-2 formation.

The shape we saw through the midfield was narrow, with Allie Long and Nikki Washington spending most time through the middle than wide. Marian Dougherty and Nikki Marshall, the anticipated starters at right and left fullback, will be expected to provide the width.

You can call that a diamond, but Cone has been reticent to ascribe labels. Instead she focuses on qualities. She wants to play an attractive and intense style, though the terms she keeps coming back to are versatility and interchangeability.

We should see Washington falling back into defense when Dougherty goes forward. Same with Long on the other side. Kerr and Long will constantly be swapping, while Washington will have license to roam.

The first part of Cone’s tenure will be about getting the rotations mastered. How does the shape adjust to the myriad of movements Cone’s allowing? That will be as important as Portland’s base formation.

Every team in the NWSL is going to have weaknesses. Most teams will have trouble scoring. Others have problems in midfield. Defense is an issue for some.

Portland’s thought to fall into this last group, and until an answer is found next to Rachel Buehler, their ability to prevent goals is in doubt. But between Edwards’ play in front of the line and O’Neil’s strong March, there’s reason to think Portland’s problems are a lot smaller than originally expected.

Even if the defense was bad, Portland was going to be a favorite to win the NWSL. Goals were hard to come by in WPS, and the few teams that found them won big. Nobody’s likely to contain Sinclair and Morgan enough to keep Portland’s attack from being the league’s best, meaning even with a terrible defense, the Thorns would be a title contender.

But now it looks like the defense could be decent. The back four may be vulnerable, but between decent goalkeeping (Karina LeBlanc), Edwards’ shield, and a good, possession-based midfield, the backline’s exposure may be limited.

Parlow Cone keeps repeating, “everybody knows soccer games aren’t won on paper,” but this team may prove more dangerous in real life than in print. On paper, names like O’Neil are unproven while the midfield looks like a collection of scattered parts. But in reality, all those pieces appear to be coming together.