The View from the North: Turf and perception vs. reality 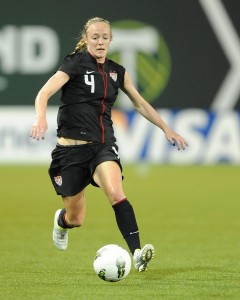 Becky Sauerbrunn in a Sept. 22, 2011, game between the US and Canada played on turf in Portland, Ore. (Patricia Giobetti | http://www.printroom.com/pro/psgiobetti)

As the old saying goes, perception is greater than reality. So it is with the decision to play the 2015 World Cup on turf, rather than on a natural playing surface.

The perception of what that might mean is far more powerful than any reason that the Canadian Soccer Association or FIFA might give for the decision.

It’s possible that the decision is based on pure motives. Turf is an equalizer when it comes to building facilities in much of the world, especially in northern climates. On a community level there is little doubt that the advancement in turf technology has allowed for more quality pitches to be built in places where maintaining grass is difficult and expensive. And, that’s a great thing. The sport has been exposed to more kids because of it.

So, it’s possible that the CSA and FIFA are looking to further legitimize the playing surface by playing the World Cup on it. That’s likely what they would say if they were talking about the controversy.

However, it’s one thing to talk about community soccer. It’s quite another to talk about the game at the elite level. At the elite level turf is universally despised and, as reported on The Equalizer, the decision to play 2015 on it has been widely criticized by the biggest names in the sport.

Most of the criticisms have focused on either the increased risk of injury by playing on turf or on the change in the way the game is played on plastic.

On the former point, the evidence is lacking. Despite a massive amount of anecdotal suggestions that turf is harder on the body than grass there is no evidence whatsoever that’s the case. In fact, the only long-term study of the subject found that there was no difference in injuries on turf as compared to grass.

The weakness of the study is that it has not looked at long-term, chronic issues. However, in a short tournament the affect of long-term play on turf won’t be felt.

The impact on play is undeniable. The ball bounces higher and runs longer on turf than it does on grass. That, in turn, changes the way that teams must play. In theory it will favor teams that play a more direct and physical style of play over those teams that play more technically. A cynic could argue that part of the decision – Canada is a more physical side that should benefit. Although they will also, likely, be one of the oldest teams in the tournament. So, if you continue to buy into the argument that turf is harder on the body than grass then, perhaps, that advantage is negated.

There is a third criticism that is mostly being whispered: That it represents a double standard in how the men’s and women’s games are governed, both in Canada and around the world.

Limiting the discussion to Canada, it seems highly unlikely that the senior men would play a meaningful game on turf. In fact, they refused to play outside of Toronto (the only viable grass stadium at time) during the recent World Cup qualifying campaign.

Why, then, should the women be forced to do so in the biggest games ever played on Canadian soil?

Perhaps the CSA has a good answer for that, but, as said, perception is greater than reality and right now the perception of the CSA is not very good with regard to this topic.