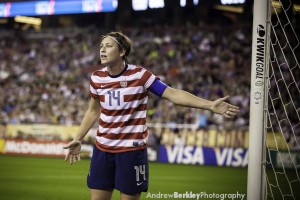 Abby Wambach says that artificial turf does not belong at an event as important as the World Cup. As of now, five of the six venues for the 2015 World Cup are artificial turf surfaces. (Photo copyright Andrew Berkley for EqualizerSoccer.com)

If the playing surfaces of five of the six Canadian venues for the 2015 Women’s World Cup remain as artificial turf, it won’t happen without a fight for natural grass playing surfaces.

Thursday’s announcement that BC Place in Vancouver would host the 2015 final – on artificial turf – was met with uproar from some of the world’s best players, including United States forward Abby Wambach, the 2012 FIFA Women’s World Player of the Year.

“I think that a World Cup deserves to be played on natural grass,” she said. “Not only do the players deserve it, but the fans deserve it. It’s a different game on artificial surface.”

Wambach said Friday that “the process has already started” to organize voices from federations across the globe in an attempt to have the artificial surfaces at the Canadian facilities replaced with natural grass for the 2015 World Cup. She said that a conversation – not a threat – needs to be had with FIFA executives.

Players are more injury-prone on artificial turf, Wambach said, and it is harder to gain consistency switching from grass to turf.

“There’s enough time from now until then to sort this out, to talk with FIFA, to get the right people in charge so that this doesn’t happen,” Wambach said. “We’ve worked so hard as female athletes – not only here in the United States, but internationally – to grow the game and in my opinion I think this is taking a step back. All of the men’s international players around the world would argue the same point. A lot of these guys will not play on an artificial surface because it is an injury-prone surface and I don’t blame them.”

Moncton Stadium in Moncton, New Brunswick, is the only venue which currently has natural grass of the six that will be used in 2015; it will be replaced with artificial turf. Wambach said that FIFA distributed surveys regarding artificial turf to players at the Algarve Cup earlier this month, which is when it became clear that the 2015 tournament would be played predominantly on turf.

Vancouver, Edmonton, Winnipeg, Ottawa and Montreal are the other host cities. CONCACAF held its 2012 Olympic qualifying tournament at BC Place in Vancouver, where the US beat Canada 4-0 in the final to qualify for the Olympics, ultimately earning gold medals in August. The Americans suffered a notable injury in Vancouver, too – to Ali Krieger on Jan. 20, 2012, which ended her Olympic roster hopes – albeit due to an awful tackle from a Dominican Republic player.

And the grind of artificial turf, says Wambach, 32, does not just affect the bodies of older players.

“This is also for younger players trying to preserve their bodies so that they can last,” Wambach said. “This is also for an Alex Morgan who will take over the reins of scoring for this team – for Team USA – for the next 10 years. You want to make sure that she can play for 10 years. I’m not saying that we need to get rid of artificial turf. That argument has long passed. But what I am saying, and what I think I am valid in saying, is that artificial surface has a time and a place and surely the World Cup is not the time and the place for it.”

Six of the eight National Women’s Soccer League teams – including Wambach’s Western New York Flash – will begin the league’s inaugural season playing on turf at their home venues, but Wambach notes that those clubs have considerably less money and fewer resources than FIFA.

The next Women’s World Cup begins on Saturday, June 6, 2015 at Commonwealth Stadium in Edmonton and ends on Sunday, July 5, 2015 with the final at BC Place in Vancouver.