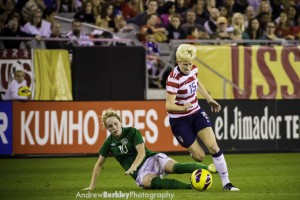 Megan Rapinoe (right) came on as a 66th minute substitute for Lyon in a 5-0 first leg win over Malmö. (Photo copyright Andrew Berkley for EqualizerSoccer.com)

Lyon opened up a commanding 5-0 lead in the first leg of the UEFA Women’s Champions League quarterfinals against Malmö on Wednesday.

Lotta Schelin scored twice and Louisa Necib, Thomis Élodie Thomis and Camille Abily added a goal apiece to remind us that Lyon is well on its way to a third straight European title. US international Megan Rapinoe came off the bench in the 66th minute. After the game, Schelin said “nothing can stop us.”

Arsenal also sits comfortably following a 3-1 first leg victory over AS Torres of Italy. Kelly Smith opened the scoring for the Gunners in the 23rd minute and Jordan Nobbs and Kim Little kicked in a goal each.

Not all the news was great for Arsenal, however. Twelve minutes after scoring the opener, Smith, who has struggled to stay healthy throughout her career, was taken off due to injury. AS Torres also pulled one back through Sandy Maendly in the 71st minute, an important road goal.

Russian side Rossiyanka still has plenty to play for after picking up a road goal in a 2-1 loss to VfL Wolfsburg in the first quarterfinal leg on Wednesday. Wolfsburg’s Josephine Henning put the ball in her own net in the opening minute of the second half to give the Russian team, featuring American Kristen Edmonds and Canadian Christina Julien, hope.

Wolfsbug picked up goals from Alexandra Popp and Martina Müller, but Popp was upset with herself for not finishing more chances.

Julie Machart scored the lone goal in the 17th minute to give Juvisy a 1-0 first leg home victory over Göteborg.

Gaëtane Thiney missed a 50th minute penalty kick that would have doubled the lead for Juvisy. Americans Yael Averbuch and Cami Levin each played the full 90 minutes.

Our friend Richard Farley has some good further analysis over at NBC’s ProSoccerTalk.