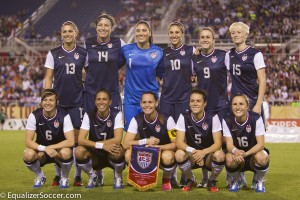 US Soccer and the USWNT have finalized a CBA through 2016. (Photo Copyright Steve Bruno for www.womens.soccerly.com)

US Soccer and the United States women’s national team have finalized a collective bargaining agreement through 2016, the US Soccer Federation and players’ association jointly announced on Wednesday.

The deal new deal will carry the federation and its women’s national team through the 2015 World Cup in Canada and the 2016 Olympics in Rio.

US Soccer and the US Women’s National Soccer Team Players’ Association issued the following joint statement:

“We are pleased to have concluded this agreement in a timely manner. It took a little longer than we had hoped given the complexity of the issues involved but we are happy it is now behind us. This agreement will allow the players to focus on keeping the U.S. Women’s National Team at the top of the sport and ensure the NWSL is successful for its launch in April.”