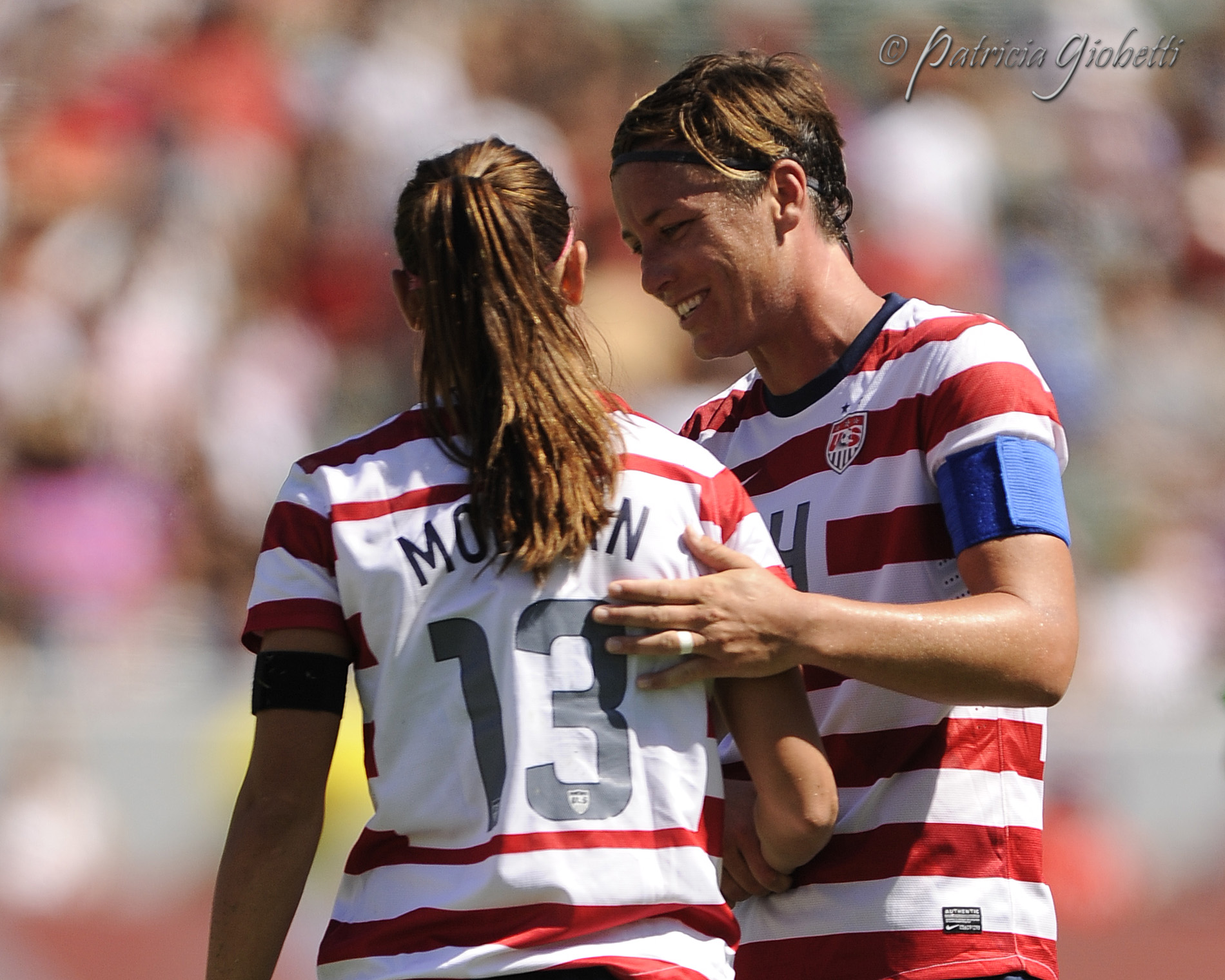 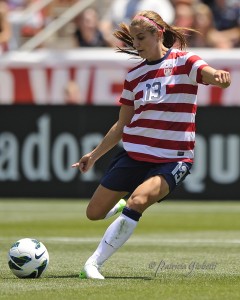 Alex Morgan scored the equalizer on Monday vs. Sweden that helped the United States through to the Algarve Cup final. (Copyright Patricia Giobetti | http://www.printroom.com/pro/psgiobetti)

Pia Sundhage sat on the opposite bench this time, but the United States still looked like a carbon copy of the team Sundhage guided to the 2012 Olympic gold medal.

It took about 55 minutes for the Americans to show that championship form under new head coach Tom Sermanni, but the world’s No. 1 team eventually came alive in the second half for a 1-1 draw vs. Sweden in Algarve Cup group play. The result puts the US through to the final on Wednesday against Germany.

Alex Morgan scored the equalizer in the 56th minute when she headed in Megan Rapinoe’s corner kick. That ended a 475-minute scoreless drought for the 23-year-old forward and gave the US a confidence it lacked throughout the first half.

Lisa Dahlkvist had given Sweden the lead in just the fourth minute with a wonder goal from 45 yards out. Swedish captain Lotta Schelin got in behind the US defense and forced goalkeeper Ashlyn Harris, making her first senior team appearance, to come off her line. Harris cleared that the ball with her feet from the top of the 18-yard-box, but it fell right to Dahlkvist at the midfield circle and the Sweden one-timed it over the head of a retreating Harris.

Heather O’Reilly hit the outside of the post on a close-range effort a minute later, but the majority of first half play revolved around Sweden, who out-muscled and out-played the Americans.

The match opened up considerably after Morgan’s second half goal, with O’Reilly nearly putting the US in front four minutes later on a counter attack. Her far post shot, however, was saved and Morgan’s rebound effort was blocked.

Sofia Jakobsson pick-pocketed US defender Becky Sauerbrunn around midfield in the 73rd minute, but her decision making in the 2-vs.-1 that followed proved wasteful.

Rapinoe was denied on the other end in the 88th minute by Swedish goalkeeper Kristin Hammarstrom. That goal would have iced a spot in the final for the US, but the draw still puts the US back in the title game after settling for third place at last year’s Algarve Cup.

Observations and thoughts from Monday’s draw:

— Kelley O’Hara was brilliant on both sides of the ball. Defensively, she matched the physicality put forth by Sweden and was the best US defender – if not player – on the field. O’Hara was a threat going forward for the US on the dribble and in the air; she had several looks at goal off headers. This is the Kelley O’Hara everyone envisioned when Pia Sundhage moved her to left back over a year ago – one who can get forward and add an extra layer of attack, but not be a defensive liability as an ex-forward. Games like this won’t be a constant just yet, but Monday may have been a watershed moment.

— Like I said Friday: Alex Morgan is not in a slump. And she wasn’t in one before that goal, either. Morgan’s goal was a good one and certainly relieved some frustrations of a stretch that equated to over four games without a goal, but she’s been productive in setting up other players throughout those goal-less games. Her header in the 56th minute should quiet any murmurs of a slump setting in.

— Whitney Engen came on for Shannon Boxx in the 85th minute and played in a defensive midfield role. Engen didn’t play long enough to get a good assessment of what she looked like in that spot, but it’s interesting given Engen is a center back. The move from Tom Sermanni was likely just to sure up the back line for the final minutes and have Engen sweep in front of the back four.

— Lotta Schelin gave US defenders nightmares all day and was unlucky not to get on the score sheet. Schelin has been one of the top forwards in the world for some time and has given the Americans plenty of trouble in the past. That she didn’t find the net on Monday is a small miracle for the US. Ashlyn Harris did well in net when called upon for the US and it is hard to fault her for Sweden’s lone tally of the day.

— Sermanni’s decision to field nearly the exact same lineup that Sundhage stuck with as US coach all last year (with now healthy Ali Krieger in place of now injured Amy LePeilbet) is an interesting one. Same players, nearly identical 4-4-2…all against a coach who built that. The decision looked like an awful one in the first half, but the match turned in favor of the US in the final 45 minutes. Sermanni could not have gone with a young lineup vs. Sweden like he did against China given the magnitude of the match and strength of opponent, but drawing Sunhage with the same team she built was bold, at the very least.