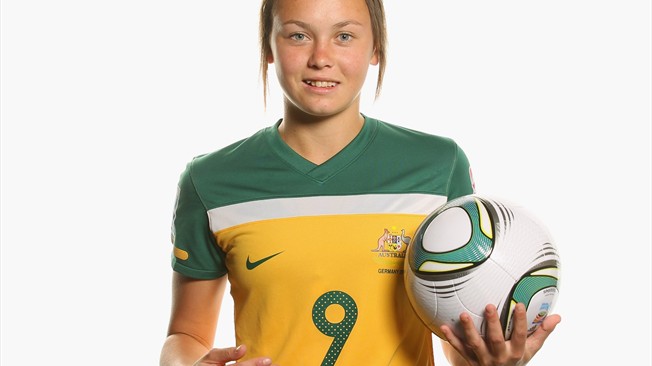 “I think she’s a great talent and we were in need of a right back and she can also help up on the flank.,” Gabarra said. “I always liked what I saw. She’s a prototypical attacking wide defender.”

Foord was only 16 when she played for Australia at the 2011 World Cup. She started three of the team’s four matches and helped them out of the group stage. Australia lost to eventual third-place finisher Sweden in the quarterfinals.

“I liked what she did in the World Cup,” Gabarra added. “With some of the (speedy) forwards in the league she’s got the pace to run with them and defend them.”

Manya Makoski, signed in the first round of free agency, had been penciled in as the right back, but Gabarra hopes the addition of Foord will allow Makoski to play a more attacking role. It also gives Sky Blue depth in the back, an asset that may help set them aside from their rivals.

“I don’t think there are many teams that have much depth in the back.”

Gabarra said he is less worried about Foord’s age and more concerned, as he usually is with internationals, with how she settles into the States.

“She’s kind of been a professional for the last year or two,” Gabarra said. “The only concern is the same concern you have with every international player. It’s how quickly they will adjust to a little different culture and a little different lifestyle and a more physical and demanding league.”

Foord represents Sky Blue’s final international spot after the allocated Canadians and Mexicans plus fellow Australian Lisa De Vanna. The club will conduct open tryouts in early March just before training camp, but Gabarra is comfortable with the players he has acquired and does not anticipate any major moves before the season begins.

Gabarra added that he does not expect any of his final three supplemental draft picks to join the team. Meghan Lenczyk (4th round), Kandace Wilson (5th), and Allison Falk (6th) were all selected with the idea that if they change their mind, Sky Blue would be acquiring one of the steals of the draft. Gabarra said Lenczyk is the most likely of the three to play.

Spirit to start season with Harris, without Garciamendez
The Lowdown: A look at NWSL rules and tiebreakers