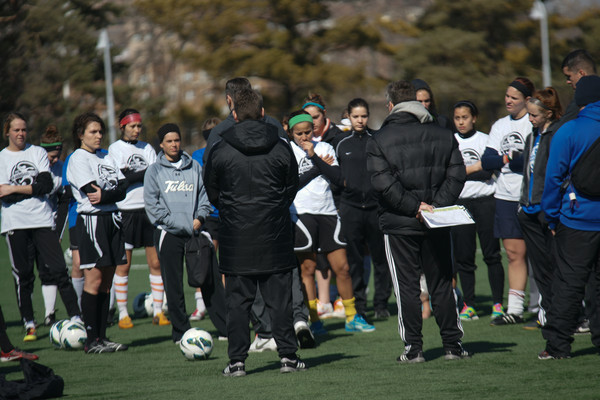 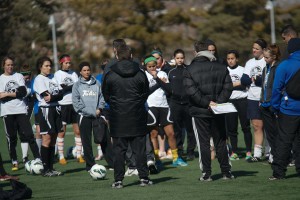 FC Kansas City held their first open tryouts over the weekend and over 65 players from around the country came to try their skills. There were a lot of local women but players flew in from both coasts and Texas as well.

Head coach Vlatko Andonovski was pleased with how tryouts went.

“Very successful, I was happy with how everything went,” he said. “From the organizational standpoint to the player potential and talent, it was great.”

FC Kansas City did not make it easy on the hopefuls. They scheduled three sessions and players had to be at all three. The first session was Saturday morning and started with temperatures below freezing. The field cleared of snow pretty quickly between the sun coming out, the passing drills and keepers diving and rolling. There was another session Saturday evening and then again Sunday morning.

Snow may not have been on the agenda but the coaches had planned for the tryouts to be difficult for the players.

“We did it for a reason, at first of course to test their fitness level and to see them in an environment where they have to come in and perform in two or three sessions in one day. That is what preseason is going to look like,” Andonovski said. “Another thing is that we needed that many hours to evaluate the players that we got there, to evaluate them in every aspect of the game.

“The first session was all technical, the second was small sided and extended small sided games, we wanted to see their awareness in tight space and danger. The third session was only eleven versus eleven and we were testing their knowledge and their understanding of the game.”

Andonovski was not alone in evaluating the talent. He and assistant coach Huw Williams brought in several area college coaches that coach women and have experience evaluating talented players. “It was the first tryout and I wanted to make sure that nothing slipped through the crack,” Andonovski said. “If any player did something good, we caught it.”

The Blues roster is deep with midfielders so the coaches’ focus was elsewhere.

“Our first and main focus was to find defenders and a good striker but if there is a good midfielder, we were not going to pass on her,” Andonovski said. “We did look at the positions a little bit but we were lucky that they were evenly split. We called back a goalkeeper, we have defenders, midfielders and forwards. We were just lucky enough that it worked out the way it worked.”

From the 65-plus players that tried out, FC Kansas City called back nine of them :

Molly Dreska, a standout midfielder with Maryland, was one of the players that endured the elements to pursue her dream of playing professionally. It had been a while since Dreska played at a high level but she was eager to return. She spoke shortly after the last session on Sunday, before anyone knew whether she was going to be asked back to the invitational tryouts.

“It’s been two years, three months and three days since my last competitive soccer game, not that I’ve been counting or anything,” Dreska said, laughing. “It was a rush of adrenaline to just get outside on a full field and play with a group of talented athletes who share the same passions as I do.”

Molly works for Sporting Kansas City and has what many would consider a dream job but she has discovered what so many athletes figure out when they hang up their jersey for the last time.

“Every day I wake up and love going to work, I am fortunate enough to work for the best team in Major League Soccer but ever since my final match with Maryland, I’ve felt an emptiness,” Dreska confessed. “It was nice to get out and fill that void and compete again. To play for FC Kansas City and represent such a passionate soccer community would be a dream come true.”

For Dreska and the others who were asked to the invitational tryouts, it doesn’t get any easier. FC Kansas City already planned on more than 20 players coming in to try out. “It only gets tougher, we didn’t know who would show up for the open tryouts, we know who’s coming to the invitational,” warned Andonovski.