The Lowdown: Looking at all eight NWSL venues 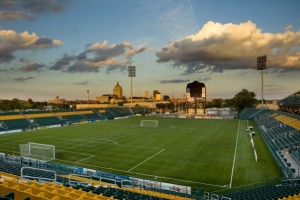 A general view of Sahlen's Stadium in Rochester, N.Y., home of the Western New York Flash.

We’re just over 50 days away from the start of the inaugural NWSL season. Here’s a quick look at all eight home venues.

The Breakers look to have found their home—at least in the short term—at Dilboy Stadium, located just off Rt. 2 near Davis Square in Somerville, outside of Boston. The public complex was rebuilt in 2006 and began hosting Breakers games for the 2012 WPSL Elite season. An extra thousand seats will be added in time for the NWSL opener on April 14, bringing capacity to about 3,500. The club sold most available tickets in 2012 giving the place a strong atmosphere by women’s soccer standards and creating the possibility the Breakers could soon create more demand than supply within their fan base.

Drawbacks include the absence of alcohol and a setting sun that can make the start of matches difficult to see on clear nights. Tailgating is encouraged though and parking lots open three hours before kickoff. Parking, however, is limited.

A far cry from the outsized Toyota Park where the Red Stars played during their two WPS seasons, Benedictine University seems to have helped endear the club to the local community. Making good on their promise to return to the top flight when they left two years ago, the Red Stars have done it. But they will keep the venue small. With just over 3,600 seats, Benedictine will be one of the smallest NWSL venue, but it should serve the Red Stars just fine.

The stadium is on the heart of a college campus so public transportation is a challenge and it is a decent hike from Chicago proper, actually sitting much closer to Naperville, Ill.

The Blues set out to be aggressive with their choice of venue and landed the largest seating capacity outside the more traditional men’s stadiums, JELD-WEN Field in Portland, Ore. and Sahlen’s Stadium in Rochester, N.Y. Located on the Kansas side in Overland Park, the 6,250-seat venue features seating on both sides. The stadium is located 10 miles from the heart of Kansas City.

The field boasts the noise of multi-sport lines and the track around it will distance fans from the action a bit.

The Thorns are getting ready to buck trends and play at JELD-WEN, which has become one of America’s models for passionate fans during its two seasons as home of MLS’ Timbers. No one is expecting the place to be full—the Timbers have sold every possible ticket since joining MLS in 2011—but it will be an upset if the Thorns do not lead NWSL in attendance.

Aside from being a destination spot for Portland soccer fans there will be no shortage of concessions or restrooms. And JELD-WEN is easily accessible by car or MAX Light Rail. Express Bus Service helps drivers make their way to the gates. It will be the league’s largest venue, so it may feel a little empty for less popular matches.

The Sounders’ training grounds and unofficial US Open Cup home welcomes the Reign to the family in 2013. Starfire seats about 4,500 and many of those seats are in the covered grandstand. Concessions and restrooms will be tight but there has been a beer garden present for Sounders Open Cup matches.

If Reign fans respond to the new club with anything close to the adulation they embraced the Sounders and for a time the Souders Women, Starfire could become the best venue in NWSL.

Snuggled on Rutgers’ Busch Campus in Piscataway,N.J.,  Yurcak has been home to Sky Blue FC since shortly after they debuted with WPS in 2009. The stadium hosts soccer and lacrosse, but not football, meaning the 5,000 seats overlook one of the best-kept and aesthetically pleasing pitches in NWSL. The club struggled to produce atmosphere during WPS, but the stadium offers excellent site lines..

Sky Blue fans beware though. If you plan on taking public transportation to games, better get yourself a ride from the nearest bus or train station. They aren’t close.

The SoccerPlex opened in 2000 and has quickly become the nerve center for soccer in the area. The complex was co-founded by John Hendricks, who was the driving force behind WUSA and still owned the Washington Freedom when they played there for two seasons in WPS. The championship stadium—one of 19 on the grounds—has also hosted US Open Cup, CONCACAF Champions League, Olympic qualifiers, ACC championships, and plenty of youth tournaments and celebrity events.

Public transportation is barely an option and the SoccerPlex sits in Germantown, at least a half hour outside Washington and about an hour from Baltimore. The Metrorail doesn’t go far enough to get very close to the stadium in Boyds, Md.

There will be plenty of empty seats at Sahlen’s this summer, but the 13,768 seat stadium should be just the type of venue all NWSL clubs strive to play in. It was the site of two iconic moments in women’s club soccer when the Flash packed the house for a WPS match against Abby Wambach’s magicJack shortly after the 2011 Women’s World Cup, and again a few weeks later for the league final. The place is big enough to feel like a big league sports stadium and small enough so as not to completely overwhelm a mid-size crowd. How much of an effect Abby Wambach has on crowds on a weekly basis will be interesting to observe.

Location is a bit of a mix. Sahlen’s Stadium is little more than a stone’s throw from downtown Rochester but is located in the heart of an area that could use some enhancements.

-Canada will host the United States in a friendly June 2 at BMO Field in Toronto. It will be Canada’s first match on home soil since the team stole the hearts of the country by winning the bronze medal at the Olympic Games. The seminal match from that tournament of course was the United States’ 4-3 semifinal win over Canada.

-The US-Canada friendly is a bit of an odd decision in the face of NWSL, which is being run by U.S. Soccer with help from Canada and Mexico. There are only two league matches on Saturday, June 1 so that will ease the burden on NWSL clubs who will have to do withoutplayers. If you’re wondering if either team will go with a younger roster and spare NWSL, don’t count on it. The U.S. could try it, and strike a psychological blow to Canada in the process, but up north the Canadians are not about to schedule a home friendly against the U.S. and not give it their best shot.

-Caitlin Foord tweeted that she will be joining Sky Blue FC this season. A right-sided player with experience at both fullback and midfield, Foord started three games at the World Cup in 2011 as a 16-year old. Foord is the first known player to sign with an NWSL team in the post-Supplemental Draft discovery period.

-Jordan Angeli speaking about the 12-year olds she coaches with the Colorado Rush on how in-tune they are with world soccer: “When the national team was in Colorado, (Lauren) Cheney, and Kelley O’Hara, and Tobin (Heath) all came over and said hi to my girls. Now they’re always like, ‘So you have their phone numbers? You have to call them. You have to call Abby Wambach.’ I think it’s crazy for them to think I’m friends with them.

“These girls are so far beyond me when I was 12 years old. They watch Premier League games and they watch all the national team games. Then they’ll come to practice the next day and talk about what happened. They’re such students of the game and that’s really cool to see.”

-So what’s next for NWSL? The open tryout process is underway and will be complete by the first week of March. The week after that, training camp begins. Still to come are uniforms and announcements about television and/or webcasts.

Liviu Bird and Jennifer Gordon also contributed to this article