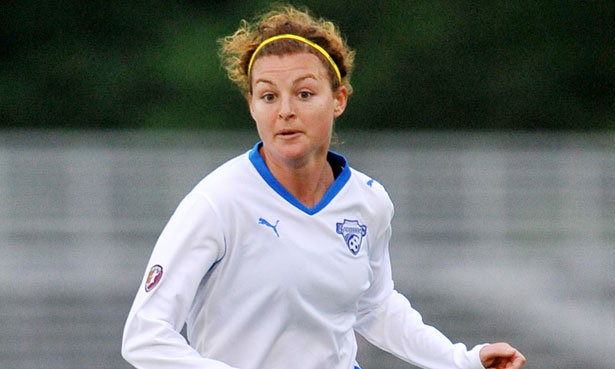 The moment it happened, Jordan Angeli knew she had torn her ACL—again. Just as quickly she knew a long road to recovery lay ahead. It was April 9, 2011 and Angeli had scored the first Boston Breakers’ goal of the season, a smashing beginning to her sophomore Women’s Professional Soccer season. And then came the bad tackle with the Atlanta Beat’s Katherine Reynolds—Angeli’s college teammate at Santa Clara—and as quickly as it began, her season was over.

In the nearly two years since Angeli tore her ACL for the third time, she has taken up coaching with the Colorado Rush, gone to Cabo San Lucas, Mexico for a rare family vacation, trialed as a sideline reporter for Colorado Rapids telecasts, bonded with her sister and brother, and become something of a yoga addict. For good measure she saw WPS fold and the National Women’s Soccer League emerge. One thing she has not done is play another competitive soccer match.

“For me this recovery has been all about really healing myself not just physically but emotionally and mentally,” Angeli said in a recent interview. “I’ve been through a lot and I felt there was no need to push it. There wasn’t a league last year and until recently I didn’t know if there would be a league this year. But I always knew I wanted to get back playing soccer.

“Hopefully it’s somewhere in this (season), but I’m not positive that’s going to be realistic for me.”

She is drawing closer to what she hopes will be an appearance this season with the Washington Spirit, who made her the 17th overall pick in the February 7 Supplemental Draft.

Angeli tore her ACL before her senior season at Santa Clara, rehabbed it, and then tore it again before her next senior season. She needed a waiver from the NCAA to play as a sixth-year senior in the fall of 2009.

Both of Angeli’s college rehabs involved use of a cadaver graft, a procedure she says looking back would not be her first choice. “I was at school and that was the only option available to me,” she said. “Knowing all that I know about cadaver grafts and how they perform in performance athletes I don’t think I would have chosen to do that.” So this time around Angeli used her own tissue to repair her ACL. But that meant getting a bone graft, which she had about a month after the injury, and then waiting four to six months. Angeli’s surgery did not take place until October 2011.

“Yes the recovery is longer if you use your own tissue but it tends to be more successful that way.”

The recovery has been long and tedious but not unexpected. Shortly after the latest injury Angeli became aware that it would take her a long time to make it back to the field.

“I knew it was going to be a longer process,” the 26-year old said. “Realistically in my mind I thought I could be better in two years. That was kind of my initial thought. Because I knew how long it took me to feel confident and feel like I was at the level I wanted to be after my second ACL. And that was without having my bone grafted.”

She was drafted No. 17 overall, in the second round, by Boston in the 2010 WPS College Draft and turned out to be a steal for then Breakers coach Tony DiCicco. Angeli burst onto the scene as one of the league’s best rookies in a star-studded draft class which included Tobin Heath, Kelley O’Hara, Lauren Cheney, Whitney Engen and Ali Riley.

Angeli’s rehab has been as much mental as physical. As part of the mental recovery she turned to yoga, something she dabbled with in college but has been doing as often as six days a week in the absence of soccer.

“I love my yoga,” she said. “It’s been a really positive way to focus on myself because yoga is all about not comparing yourself with anybody else. It’s about your breath and you’re breathing through difficult postures. I think it has helped me. Just the thought of breathing and kind of focusing on what you can do rather than what you can’t do, that’s a huge thing for me.”

Fast forward to the present, 16 months after her latest surgery, and Angeli is living back home with her parents in Colorado. She has taken advantage of that time to grow closer than ever to her sister Ashley and to enjoy following her brother Darik in his hockey career at Ohio St.

“I’m doing well. I am playing a little bit and trying to amp that up. So far I feel really good. Things are coming along. It’s a slow process.”

Training sessions are both individual and with a group of Colorado Rush girls Angeli is helping to coach. Soon she hopes to jump in and train with the 18-year-old boys. “It’s such a high level of play even at 18 because they’re so much faster than us.

“That’s kind of my last step I think before I get back to feeling like I can play at the level I want to take it.”

As of our interview with Angeli she had not done anything involving contact.

“I think I’ll know when it’s the right time,” she said.

The mental side of the recovery is coming along too.

“I feel good things about it. I finally feel like I’m heeled and I’m over what has happened to me. And that’s a pretty cool feeling.”

And if she never makes it back?

“This has been hard. This last one has been the hardest. I never imagined the lows I would get to. But I always know that my life is still pretty good. I am so blessed with the family I have and the experiences I have already gone through. And I accomplished my goal of playing professionally. I accomplished my goal of training with the national team. Do I want that to be all I ever have with soccer? No. I honestly think that there is a lot more for me within the sport. And I have bigger dreams and I have bigger goals with playing soccer.