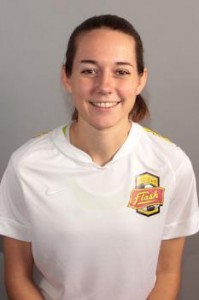 A little more than a year ago, all was right in Katy Frierson’s soccer world. She had just completed a stellar career at Auburn and had been drafted by the Atlanta Beat, the nearest WPS club to her native Alabama. And then WPS folded.

“Atlanta was a dream spot for me, being from Birmingham. When I found out about it (folded), I pouted for a couple of weeks,” Frierson said a few hours after being drafted again on Thursday, this time by Sky Blue FC in the first round (no. 5 overall) of the NWSL Supplemental Draft. “I refused to touch a soccer ball. I was pretty upset about it. Then Aaran called.”

Aaran is Aaran Lines, head coach of the Western New York Flash, another WPS casualty team who were, at the time, gearing up to play in WPSL Elite. After some conversations, Frierson was convinced to spend the summer in upstate New York, where she wound up being part of a championship club — Western New York’s third straight title in a third straight different league.

“It’s really neat because we were a close group and I’ve kept in touch with everybody that got drafted there,” the 22-year old midfielder said, one of six Flash players from last year’s team that got drafted on Thursday. “To see (Stephanie) Ochs go first and Laura (Heyboer) and Tori (Huster), we were best buds last summer. So it’s really exciting.”

It was exciting last summer as well. In the semifinal, Frierson’s midfield play was a main reason the Flash rallied late for the win. (“I don’t think so. It was a total team effort,” she insists.) Humble as she may be, Frierson came on as a substitute, scored the equalizer, and set up Heyboer for the game-winner. Both goals came with less than 12 minutes to play.

“It was a cool game, one that I’ll definitely remember forever.”

In the final, Toni Pressley hit the equalizer deep into stoppage time and the Flash prevailed over the Chicago Red Stars on penalties.

“It was dramatic,” Frierson said. “When you work hard and you commit to something, seeing it pay off in the end, which doesn’t always happen, it makes everything worth it. Having those relationships with the girls, there wasn’t a better way to go out, that’s for sure.”

Frierson’s play in WPSL Elite made her a prized commodity when NWSL formed. After getting some feelers from teams during the free agency signing period, Frierson was taken by Sky Blue FC with the 5th overall pick in the Supplemental Draft. She will be reunited with former Flash keeper Brittany Cameron, taken in the 2nd round.

“I found out via Twitter,” Frierson said. “I was trying to play cool but I was refreshing the feed probably every 10 seconds trying to see what was going on. I was following along and I saw that Sky Blue picked me and I was like, ‘no way — this is awesome.’ And then it kind of hit me. I was with my fiancé and my little sister and we just enjoyed the moment. It was fun to see your name come across the screen.”

By the time Frierson arrives in New Jersey to start training camp next month, her fiancé will become her husband. Kevin Freels is a medical student and will not be accompanying Frierson on her soccer season in central New Jersey.

A year ago it looked like the dream of playing in a domestic professional league had died, but here is Frierson, 22, about to embark on a pro career.

“I’m just really excited to play soccer again. This is why I wanted to play professional soccer – to play in a league like this.”