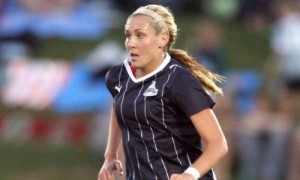 Allie Long was pondering her soccer future when the old Albert Einstein quote came to mind about doing the same thing over and over again equating to insanity. So with that in mind the 25-year old Long Islander signed a free agent contract to play for Portland Thorns FC in the National Women’s Soccer League.

“I wanted something out of my comfort zone,” said Long, who said she has never been based more than four hours from home to play domestically (she played for PSG in France during the 2011-12 season). “I thought that Portland was a great soccer city. And of course Cindy (Parlow Cone, Thorns head coach) as a former Tar Heel coach, I know she’s going to be a great coach for the club. But I guess I was really excited to do something new.”

Long will be joined in Portland by fellow free agents signings Nikki Washington, Becky Edwards, and Nikki Marshall. She does not know yet exactly where she will be posted but it figures to be somewhere in the midfield. During her professional career Long has spent more time on the defensive side of the midfield.

“I’m hoping to get a role when I can create and help score goals myself as well as play defensive and be able to keep it,” she said, adding that Parlow Cone has not discussed a detailed role with her yet. “I love keeping possession of the ball and playing quickly. I like both aspects of the game so wherever she needs me is where I’ll be and at the end of the day I just want to win.”

The addition of Edwards could help get Long into a more attacking position. Wherever she winds up the job of the midfield will be to feed Alex Morgan and Christine Sinclair, world class strikers who give the Thorns instant credibility in the goal scoring department.

Long and Morgan are no strangers. They were recently part of a training group in California under the auspices of none other than Mia Hamm. They not only trained together but Long stayed at Morgan’s house.

“I think that our relationship off the field definitely will correlate to on the field,” Long said.

On training with Hamm she said, “Thankfully Mia was so gracious. We trained twice a week with her. She was just awesome. She’s my all-time favorite so I went in there hoping to learn just one thing and come back satisfied. I came back and I feel like I learned way more than I even expected. It was just such a great experience. I’m so thankful that she took her time to do that for a bunch of us.”