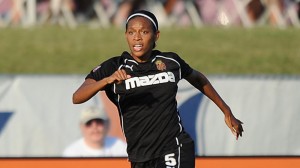 Candace Chapman is one of only two Canadian signings -- outside of the 16 allocated players -- announced in NWSL thus far. (Photo Copyright: Patti Giobetti | http://www.printroom.com/pro/psgiobetti)

There is little doubt that having 16 full-time professional playing opportunities for members of the Canadian national team is in the best interest of Canadian women’s soccer.

Prior to the Canadian Soccer Association’s involvement in the National Women’s Soccer League the number of women playing professionally full-time hovered around 10. Now, it’s close to double that.

With the core of the national team playing professionally in the lead up to 2015, it can only benefit. However, the excitement of gaining those 16 NWSL slots is yet to carry over into the league’s free agency period. Veteran Candace Chapman reportedly found work, according to sources. She is said to have agreed to terms with the Washington Spirit, and Seattle Reign FC signed young forward Tiffany Cameron (over half the league’s free agents remain unannounced).

The lack of Canadians was to be expected. It stands to reason that the vast majority of free agency signings will be Americans. After all, the clubs are in the United States and the logistics of uprooting your life to play in a foreign country are such that it’s going to be difficult for too many non-Americans to fill the spots that are not paid for by the federations – at least not without a significant paycheck to ease the transition.

The lack of additional opportunities for Canadians in the league has led some in Canada to question why the CSA did not take the additional step to ensure that there was a Canadian team in the league. Although there has been some vague talk of a Canadian club coming into the league in the future, no one is willing to talk specifics.

Actually, the start of the NWSL has led to a couple high profile women’s programs in Canada going away. The most surprising of those was the Vancouver Whitecaps women, who played in the W-League.

The Whitecaps have long held up their women’s program as being part of a vision to make the ‘Caps an all-encompassing club that is inclusive of both genders and all ages (though that vision has been disputed by some ex-players). Many saw the folding of its senior women as a move away from that model to focus on the MLS team.

The Caps themselves said that the move would allow them to build other aspects of their women’s program and that it was part of a larger restructuring.

Could that restructuring include a NWSL expansion team in the future? That’s certainly the hope of many fans, but there has not been anything concrete to suggest that it’s in the plans.

It’s unlikely that the other two Canadian MLS sides, Toronto FC or the Montreal Impact, will be involved. The Impact have never given any indication that they have plans on the women’s side of the sport and TFC president of business operations Paul Beirne was quoted in December as saying that there was no immediate plans to expand in that direction. He indicated that the Reds needed to “take care of their core product (TFC) first.”

The wildcard in Canada is the 2012 W-League champion Ottawa Fury. The Fury have been aggressive in growing the club and have never denied that they may have aspirations beyond amateur soccer.

This writer asked the Fury two years ago whether they planned to look at the WPS. The answer then was that they wanted to see a stable professional league in North America before taking the risk to move up.

Those close to the club say that the plan is to see if NWSL sticks. If it does, there is a better than average chance that they will be looking to bring pro soccer to the capital.

— They will play England in Rotherham on April 7 and Germany in a yet-to-be-named German location on June 19.

— The two games will likely wrap up first half of 2013 for the national team, who will also compete at the Cypus Cup next month.

— Christine Sinclair will finish her suspension for speaking out against the referee following the Olympic semi-final loss to the U.S. at the Cyprus tournament.

— As of today, there are no home friendlies planed for 2013. However, it’s expected that the women will play in Canada in the fall.

Duane Rollins is the managing editor of the Canadian Soccer News and a columnist for the Score’s Counter Attack blog. He’s covered the Canadian national teams of both genders since 2002. He encourages feedback via email at duanegrollins@gmail.com, or on Twitter @24thminute.