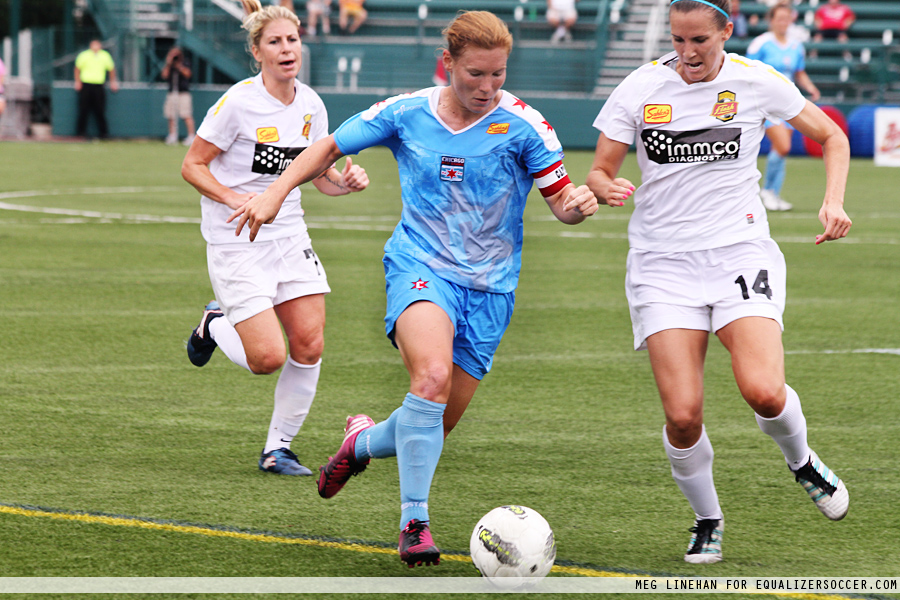 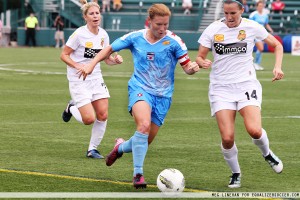 Five days after the deadline for NWSL clubs to submit their free agent signings less than half of these signings have been confirmed by the eight clubs. The crux of the holdup in U.S. Soccer paperwork. Players cannot be announced officially until everything is processed at home base.

The biggest newsmakers on Tuesday were the Chicago Red Stars, who announced Lori Chalupny, Ella Masar, and Taryn Hemmings to go with Leslie Osborne. The club has a fifth free agent signed—they received compensation for Amy LePeilbet, who will miss most of the season with a knee injury—but have not said who it is yet. The current group consists of mostly familiar faces and players with Midwest roots.

“Ella’s been around the Red Stars for a long time and she’s from Illinois,” Red Stars general manager Alyse LaHue said. “We consider her a large piece of our puzzle at this point. Lori of course was with us last year and is another Midwest native. She was captain of our team last year.”

Osborne recently announced her decision to return to the Midwest where she grew up a stone’s throw from Milwaukee. She spent the last three seasons as a Boston Breaker and her move to Chicago took many by surprise.

“Nobody can deny what she has done with the Boston Breakers over the last few years,” LaHue said. “She’s been a captain and a leader on the field and has U.S. national team experience. She still has a few years left to play and I think being able to play close to home was important to her.”

Osborne has some crossover appeal as a spokesperson for Puma and LaHue looks at her as a player that can help at the gate as well as the midfield.

Hemmings is the outlier. She is from Colorado and has spent her professional years with the Breakers, plus a stint in Australia. The all-time leading scorer for Denver University now finds herself playing a defensive role.

“We do see (Taryn) helping us out on the backline, possibly even in central defense,” LaHue said.

The Red Stars will likely be looking for more defensive help in Wednesday’s supplemental draft. The loss of LePeilbet, a rock solid center back, put the team behind the eight-ball on the back line. Much of their college draft was used on attacking players plus goalkeeper Taylor Vancil.

LaHue was politely evasive about the Supplemental Draft.

“It’s a little bit up in the air right now,” she said. “There are still a few holes on the field we would like to fill.”

The Red Stars have been talking to international players but as yet have not used either of their two slots above and beyond the allocated players from Canada and Mexico. Their fifth free agent is a domestic player.

Sanderson played for the Philadelphia Independence and D.C. United Women and becomes the second most notable Breakers’ striker after Sydney Leroux.

FC Kansas City has been quiet despite intense speculation about their free agents. In Buczkowski they nabbed an under-appreciated defensive midfielder who has played in championship games each of the last four seasons.

“This is somebody whom we targeted from day one, and we are fortunate to have a player of her caliber on our roster,” Blues president Brian Budzinski said. “Jen’s strong presence in the midfield will go a long way to solidify what we believe is one of the stronger midfields in the NWSL.”

Less than three months into NWSL’s existence, is it possible the league’s greatest strength could also be its biggest liability? There is no question that U.S. Soccer’s willingness to invest in players, while at the same time convincing its neighboring federations to do the same, is not only the backbone of the league but a cause for much optimism. But the federation us also serving as the league office and information has been tightly guarded.

A few weeks ago Abby Wambach was asked what factors will help this league to succeed where its two forerunners failed. She replied frankly by saying, “I think that the quickest and easiest answer to that is money.”

And it’s true. Money will trump just about every other factor when it comes to the long-term sustainability of NWSL. Yet growth will only come if the news cycle is allowed to generate itself and so far U.S. Soccer is keeping almost complete control of that cycle.

To that end, here’s what we know and what we think we know about each team and their free agents. Keep in mind that the free agency window is closed and we’re just waiting on U.S. Soccer approval to hear all of the names.

Joanna Lohman, who is close with Sanderson, has been tied to the Breakers but she also has strong ties to the Washington D.C. area. The Breakers need a goalkeeper since their only rostered keeper is 18-year old Cecilia Santiago who they were allocated from Mexico. Speculation is that the Breakers are waiting for the Supplemental Draft to get their next goalkeeper.

The Red Stars have a fifth spot and will be announcing another player soon. All we know so far is that it will not be an international. That leaves the Red Stars two international spots to use either in the Supplemental Draft or in discovery afterwards. They still need defenders and scoring depth.

A franchise once panned as the least desirable to play for—even though they had not played a game yet—is putting together a solid team. Melissa Henderson’s name has been tied to the team as another free agent but mum’s the word so far. With three free agent spots still to be filled the Blues might be the only team without a glaring weakness and they are so far unburdened by injury or overseas commitment.

The Thorns have yet to make any of their free agents public but Allie Long has already made public that she will play at JELD-WEN and The Equalizer has reported Nikki Washington as another free agent signing. This is another team without many weaknesses on paper but the midfield could use some help. Tobin Heath is in France through May and they drafted Amber Brooks with the hope that she will come back from Bayern Munich for the last part of the season.

Sky Blue FC announced their signings via Twitter late last week but have yet to update their website to reflect the new additions. The team thought about holding De Vanna back but considering her familiarity to the US pro scene elected to make her one if their signings. Jim Gabarra is putting together a solid if unspectacular group. He is also probably the coach who loses the most with the supplemental draft and subsequent discovery process. He has been coaching women at the top level available for a dozen years but most of any scouting advantage he might have is negated by the process.

Reign FC are definitely the watch team at the moment. They have been decimated by factors beyond their control from Amy Rodriguez’s pregnancy to the late arrival of Megan Rapinoe and Teresa Noyola. They were granted a fifth free agent slot but elected to pass on it due to the small amount of time they had to fill it. That sounds fishy since they undoubtedly spoke to more than four players and because signing any player is better than signing no one. The team’s Facebook page included an ominous post about a potential trade. Could they have moved the fifth slot somewhere else? As for the ones they did sign, Fishlock seems like a perfect player to keep hidden until after the supplemental draft since few on these shores know much about her.

By far the quietest team in the league in terms of free agency. The Equalizer reported they will sign Candace Chapman, but nothing from the club. They did win a fifth free agent slot, presumably because Ashlyn Harris is staying in Europe until the end of their season and losing a goalkeeper is more vital than a field player. However, Steven Goff of the Washington Post reported in a tweet that the team also expects to lose one of their Mexican allocations (Alina Garciamendez and Teresa Worbis) to a different league. Garciamendez is on trial with FFC Frankfurt. They were allocated a defensive-heavy group and tried to make amends in the draft, but they will still be looking at forwards and will need at least two keepers.

First reported by Jeff Di Veronica of the Democrat and Chronicle, Zerboni and Huffman have acknowledged the signings and we’re inclined to go with DeVo. It is a fascinating group. Zerboni was the best player, and Adriana a goal scoring machine, on the Flash’s WPSL Elite team last season. Kerr is a 19-year old Australian who could prove an excellent long-term investment. The Flash are likely to be in the market for one strong center back to anchor things in front of their young goalkeeper group, but they have potential stars at all of the attacking positions.

-Tina Ellertson is the latest name to take herself out of the running for a roster spot. The veteran defender and mother of two tweeted late Monday that she would not be playing professional soccer this year: Reason: family.

-The Breakers sold out every game last season playing in WPSL Elite, but the task will be tougher this time around. Dilboy Stadium is adding 1,000 seats to bring the capacity up to about 3,500.

-As of late Tuesday they were just over 50 players available for 48 selections on Thursday’s Supplemental Draft. However that number is expected to rise before Thursday.

-Expect Becky Edwards and Nikki Marshall to surface as two of the unknown free agents.

-It will be interesting to see how teams handle Thursday, or more specifically how they handled their player lists. It is impossible to scout anything close to the entire country for women’s soccer players. Did teams avoid naming players for the draft in hopes of “discovering” them next week?

-Canada will play England on April 7 and Germany on June 19 in friendlies. Canada will travel to Europe for both. They next play Switzerland in the Cyprus Cup on March 6.

-The first U.S. training camp under Tom Sermanni is underway. The team will play its first match of the season against Scotland this Saturday.