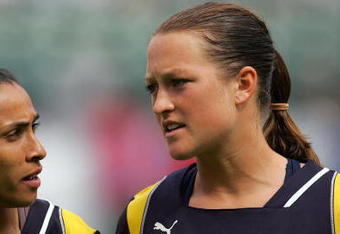 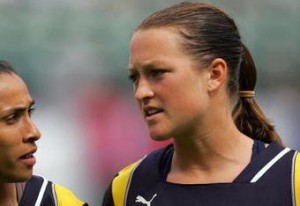 In four seasons of soccer since graduating from Notre Dame, Brittany Bock has played on four different club teams. So when it came time to figure out where she will play when the National Women’s Soccer League launches later this year, the 25-year old went with coaching familiarity. It landed her in New Jersey, where she will ply her trade for Sky Blue FC.

“It was a really hard decision for me,” said Bock, who spoke to several other teams. “I probably couldn’t go wrong with any decision but at the end of the day it just felt right and I have a good relationship with Jim (Gabarra),” Bock said, referencing Sky Blue FC coach Jim Gabarra.

Bock first played for Gabarra under somewhat adverse circumstances. She was a member in good standing with the Los Angeles Sol when that team folded about a month before training camp in 2010. Gabarra, then coaching the Washington Freedom, grabbed Bock in the dispersal draft. The other challenge was that she was nursing a nagging foot injury that had cost her a trip to national team camp.

“I didn’t really know (much about) Jim before that,” Bock said. “I really struggled in the beginning there and I didn’t play much. But he was always there for me and pushing me. I think he’s a great coach but even more than that he’s a better person.”

Bock affirmed her strong player-coach relationship with Gabarra when she joined Sky Blue on a trip to Japan that happened right after WPS scrapped the 2012 season. “We just had a really great trip and have kept a really good relationship.”

An important area player and coach will have in common is Bock’s ability to play all over the field and Gabarra’s desire for players not only able but willing to move around. As a WPS rookie in 2009, Bock was the jack-of-all-trades for the Sol, who finished top of the table.

“I’ve always been like that,” said Bock, most often referred to as a midfielder. “I would ideally like to play in center mid. That is where I think I can use the best of my abilities and I’m more comfortable. But I’ve always wanted to help my team out so whether it was at forward or at center back, he knows that I am that versatile player. So wherever the team needs me.”

A Midwestern woman from Naperville, Ill., Bock says she is not much of a city person and welcomes the chance to live in Central New Jersey, where Sky Blue has been laying roots since before joining WPS in 2009. Based on the current roster there it is certainly possible that Bock will find herself right in the center of the midfield. But there is still this week’s supplemental draft and the chance for other shuffling of players before the games get going in mid-April.