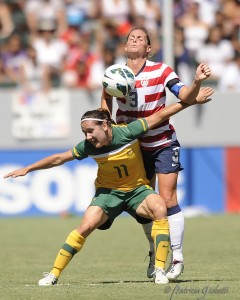 De Vanna and Bock both have previous experience playing for Sky Blue coach Jim Gabarra.  De Vanna was part of the first Washington Freedom squad to play in WPS.  The popular Australian netted six goals over two seasons with the club before making the move to Florida where she scored three more times in limited appearances for magicJack.  The diminutive 28-year old has recently played at home in Australia and in Sweden.

Bock is one of the more versatile American players around.  She was a jack-of-all-trades for the Los Angeles Sol in 2009 before joining the Freedom when the Sol folded before the 2010 season.  After that she played for the Western New York Flash where she was a member of the final WPS championship side in 2011.

Makoski returns to play in the US after three years off.  She was Bock’s teammate on the ’09 Sol and went to Atlanta in the dispersal draft.  But she hurt her knee in pre-season and did not play in WPS again.

Adams scored one of the more famous goals in WPS.  In the 2010 Super Semifinal, Adams scored the goal in extra time that sent the Independence through to the final.  The Breakers contended that Adams had touched the ball with her hand.  The Independence lost the final to FC Gold Pride.

Sky Blue FC now have 15 players in place as they continue building a roster for the inaugural NWSL season.  Gabarra has so far put together a balanced team with players like Bock and Kelley O’Hara able to contribute in a variety of positions.  The back four will be anchored by U.S. national team captain Christie Rampone plus first round pick Lindsi Lisonbee-Cutshall.